Last updated July 11, 2021
Not to be confused with Shinigami.

Shikigami (式神) (also read as Shiki-no-kami (式の神)) is the term for a being from Japanese folklore. It is thought to be some sort of kami , represented by a small ghost. [1] The belief of shikigami originates from Onmyōdō . According to the tradition of Onmyōdō, shikigami is a symbol of onmyoji 's power because onmyoji can freely use shikigami with magical powers. It has been associated with "curses" since the 1000s of the Heian period, and was often depicted as a bird or a child in Japanese literature and Emakimono . [2]

Shikigami are conjured beings, made alive through a complex conjuring ceremony. Their power is connected to the spiritual force of their master, where if the invoker is well introduced and has much experience, their shiki can possess animals and even people and manipulate them, but if the invoker is careless, their shikigami may get out of control in time, gaining its own will and consciousness and can even raid its own master and kill them in revenge. Usually shikigami are conjured to exercise risky orders for their masters, such as spying, stealing and enemy tracking. Shikigami are said to be invisible most of the time, but they can be made visible by binding them into small, folded and artfully cut paper manikins. There are also shikigami that can show themselves as animals. [1] [3] [4]

In the Izanagi-ryu (Japanese : いざなぎ流) folk religion, the most elite onmyōji could also conjure an exceptionally powerful type of shikigami called a shikiōji (Japanese : 式王子) to ward off disasters or demons that cause sickness. Regular mystics could not attempt to summon it without risking losing control of it due to its oni-like nature.

Abe no Seimei was an onmyōji, a leading specialist of onmyōdō during the middle of the Heian period in Japan. In addition to his prominence in history, he is a legendary figure in Japanese folklore and has been portrayed in a number of stories and films. Shaman King is a Japanese manga series written and illustrated by Hiroyuki Takei. It follows the adventures of Yoh Asakura as he attempts to hone his shaman skills to become the Shaman King by winning the Shaman Fight. Takei chose shamanism as the main theme of the series because he wanted a topic that had never been attempted before in manga. The Shaman King manga was originally serialized in Shueisha's Weekly Shōnen Jump between June 1998 and August 2004. The individual chapters were collected and released in 32 tankōbon volumes. In 2017, Kodansha acquired the rights to the series and re-launched it on 35 e-book volumes in 2018, also published in print since 2020.

Anna Kyōyama is a fictional character created by manga author Hiroyuki Takei. She appears in Shaman King as a primary character, while an alternate character with the same name and similar appearance appears in Butsu Zone, and Itako no Anna, a one-shot chapter which focuses on Anna. Takei notes in an interview, that she is like his own personal mascot or good luck charm, because Anna appears in so many of his works.

Yoh Asakura is a fictional character and protagonist of the manga series Shaman King created by Hiroyuki Takei. Yoh is a shaman with a lazy demeanor who is accompanied by a six-hundred-year-old samurai ghost, Amidamaru. When first introduced, Yoh appears as a young teenager who wishes to become the "Shaman King", the world's ruler, in an attempt to grant his own wish of living a peaceful life. However, as he befriends more people in the shaman fighting tournament to become the Shaman King, it is revealed Yoh has a twin brother named Hao Asakura who wishes to destroy humanity. As a result, Yoh's objective changes to stop his brother's hatred toward mankind.

Onmyōdō is a system of natural science, astronomy, almanac, divination and magic that developed independently in Japan based on the Chinese philosophies of yin and yang and wuxing. The philosophy of yin and yang and wu xing was introduced to Japan at the beginning of the 6th century, and influenced by Taoism, Buddhism, and Confucianism, evolved into the earliest system of Onmyōdō around the late 7th century. In 701, the Taiho Code established the departments and posts of onmyōji who practiced Onmyōdo in the Imperial Court, and Onmyōdō was institutionalized. From around the 9th century during the Heian period, Onmyōdō interacted with Shinto and Goryō worship (御霊信仰) in Japan, and developed into a system unique to Japan. Abe no Seimei, who was active during Heian period, is the most famous onmyōji in Japanese history and has appeared in various Japanese literature in later years.Onmyōdō was under the control of the imperial government, and later its courtiers, the Tsuchimikado family, until the middle of the 19th century, at which point it became prohibited as superstition.

Onmyō Taisenki (陰陽大戦記) is a Japanese manga series scripted by Yoshihiko Tomizawa and illustrated by Hiroyuki Kaidō. It was adapted into an anime series produced by Sunrise, NAS, and TV Tokyo.

Hao Asakura, also known as Zeke Asakura in the English version of the Japanese anime series, is a fictional character and the main antagonist in the manga and anime series Shaman King, created by Hiroyuki Takei. He is voiced by Minami Takayama in the Japanese version and Sebastian Arcelus in the English version. Hao is the ancestor of Yoh Asakura, the protagonist of the series, as well as his twin brother in his third life.

Teito Monogatari is an epic historical dark fantasy/science fiction work; the debut novel of natural history researcher and polymath Hiroshi Aramata. It began circulation in the literary magazine Monthly King Novel owned by Kadokawa Shoten in 1983, and was published in 10 volumes over the course of 1985–1987. The novel is a romanticized retelling of the 20th-century history of Tokyo from an occultist perspective. 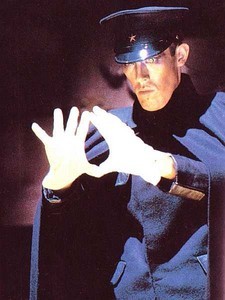 Yasunori Katō is a fictional character, the protagonist of the Japanese historical fantasy series Teito Monogatari, created by Hiroshi Aramata. He first appeared in a 1983 issue of a science fiction magazine published by Kadokawa Shoten but gained more widespread attention with successive publications as well as his cinematic debut, and has since gone on to be referenced frequently in Japanese popular culture. His character is generally associated with onmyodo mysticism since Teito Monogatari was one of the first novels to popularize the art in modern Japanese fiction. 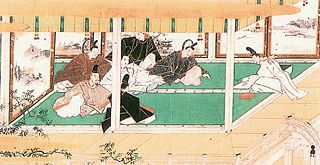 Onmyōji was one of the official positions belonging to the Bureau of Onmyō of the Ministry of the Center under the ritsuryō system in ancient Japan, and was assigned as a technical officer in charge of oriental divination and geomorphology based on the theory of the yin-and-yang five phases. In the middle ages and early modern period, the term was used to refer to those who performed Prayers and divination in the private sector, and some of them were regarded as a kind of clergy.

Onmyōji (陰陽師) is a 2001 Japanese film directed by Yōjirō Takita. It tells of the exploits of famed onmyōji Abe no Seimei, who meets and befriends bungling court noble, Minamoto no Hiromasa. Together they protect the capital of Heian-kyō against an opposing onmyōji, Dōson, who is secretly plotting the downfall of the emperor.

Shōnen Onmyōji (少年陰陽師) is a Japanese light novel authored by Mitsuru Yūki and illustrated by Sakura Asagi. The novel is serialized in Kadokawa Shoten's The Beans. The light novel has 47 volumes, including three short stories and a side story. A manga acting as a gaiden is being serialized in Beans Ace.

The World God Only Knows, abbreviated as Kaminomi (神のみ), is a Japanese manga series written and illustrated by Tamiki Wakaki. It was originally serialized in Shogakukan's Weekly Shōnen Sunday from April 2008 to April 2014, with its chapters collected in 26 tankōbon volumes.

Kami Imai is a Japanese manga artist best known as the creator of Needless which has been adapted into a 24 episode anime television series by Madhouse.

Tokyo Ravens is a Japanese light novel series written by Kōhei Azano and illustrated by Sumihei. It was adapted into a manga series in 2010. It received an anime series on October 9, 2013 and ended on March 26, 2014. Funimation simulcasted the series on their website. On October 29, 2014, Kadokawa began publishing the English volumes of the Manga on BookWalker, their official eBook store.

Onmyōji (陰陽師) is a series of historical fantasy short stories and novels written by Japanese author Baku Yumemakura. It follows the story of a fictionalized version of the Heian period onmyōji Abe no Seimei, a master in onmyōdō, a traditional Japanese cosmology.

How Not to Summon a Demon Lord, also known as The King of Darkness Another World Story: Slave Magic is a Japanese light novel series written by Yukiya Murasaki and illustrated by Takahiro Tsurusaki. The light novels are published in English by J-Novel Club. A manga adaptation by Naoto Fukuda has been running since 2015, and is licensed by Seven Seas Entertainment. An anime television series adaptation by Ajia-do Animation Works aired from July 5 to September 20, 2018. A second season by Tezuka Productions and Okuruto Noboru aired from April 9 to June 11, 2021.

Hengen Taima Yakō Karura Mau!, also known as simply Karura Mau!, is a Japanese manga series by Kiichi Nagakubo. Its first two volumes were adapted to an animated feature film in 1989 and an OVA series in 1990 respectively.