Kamatamare Sanuki is a football (soccer) club based in Takamatsu, the capital city of Kagawa Prefecture of Japan. They currently play in the J3 League. They entered the J League in 2014 after finishing as runner-up in the Japan Football League in 2013. The first part of their name was coined by combining the Japanese word Kamatama and the Italian Mare ("Sea"). The second part is what Kagawa Prefecture used to be called. Their name as well as their crest, which also features a kamatama udon bowl, are so unique that the club instantly became one of the best-known non-J. League sides in Japan when announced in October 2005.

Kota Sugawara is a Japanese football player who played for Kochi United SC of the Shikoku Soccer League, scoring a record 49 goals in 3 seasons.

The 2005 J.League Division 2 season was the 34th season of the second-tier club football in Japan and the 7th season since the establishment of J2 League.

Sho Matsumoto is a Japanese football player who plays for Kochi United SC. 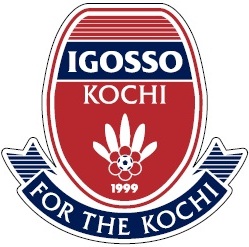 Igosso Kōchi was a football (soccer) club based in Kōchi, the capital city of Kōchi Prefecture of Japan. They played in the Shikoku Adult League. The club was known as Nangoku Kōchi F.C. (南国高知FC). In December 2013 the club name changed to Igosso Kōchi. In January 2016 they came to an agreement with neighbouring club Kōchi U Torastar FC to form a club to represent Kōchi Prefecture in the J.League. In February 2016, the two clubs established Kōchi United SC.

FC Imabari (FC今治) is a Japanese football club based in Imabari city, Ehime Prefecture. They play in the J3 League.

The Chushikoku Collegiate American Football Association (中四国学生アメリカンフットボール連盟) is an American college football league made up of colleges and universities primarily on the island of Shikoku; two schools are located in the Chūgoku region of Honshū.

Shota Fujisaki is a Japanese football player. He played for Fujieda MYFC.