Last updated November 19, 2020
For the last lord of the Satsuma Domain, see Shimazu Tadayoshi (2nd).
In this Japanese name, the family name is Shimazu.

Shimazu Tadayoshi (島津 忠良, October 14, 1493 – December 31, 1568) was a daimyō (feudal lord) of Satsuma Province during Japan's Sengoku period. [1] He was born into the Mimasaka Shimazu family (伊作島津家), which was part of the Shimazu clan, but after his father Shimazu Yoshihisa died, his mother married Shimazu Unkyu of another branch family, the Soshū (相州家). Tadayoshi thus came to represent two families within the larger Shimazu clan.

Shimazu Katsuhisa, who presided over the Shimazu family, did not have a son and he was driven out by Shimazu Sanehisa, who was the head of yet another branch, the Sasshū (薩州家). Sanehisa then laid claim to be the head of the clan without being properly recognized by the rest of the families. Katsuhisa asked Tadayoshi for help to regain his position, and Tadayoshi sent his son Shimazu Takahisa to be adopted by Katsuhisa. [2] In 1526, Katsuhisa handed over the position of the head of the family to Takahisa. In 1539 though, during the Battle of Ichirai, Tadayoshi defeated Katsuhisa (who would regain power later) and Takahisa came to be recognized by all members of the Shimazu clan as the head. [2]

He and his son lived together for a number of years at Uchiujijó castle and after Takahisa's succession, Tadayoshi retired to a monastery which belonged to the Zen sect. [2] During this time Tadayoshi called himself Shimazu Nisshinsai (or Jisshinsai) (島津日新斎) [2] [3] He held a great amount of power, trading with the Ryūkyū Kingdom and Ming-dynasty China. He also arranged for massive purchases of arquebuses to make the clan prosperous for the planned unification of Kyūshū by Takahisa.

Tadayoshi wrote Iroha uta a set of 47 poems poem that conveyed Confucian moral principles in an comprehensible manner. [1] The poems consisted of a blend of Confucian values, the Buddhist faith and the qualities for military success. [1] Each of the 47 short poems or stanzas consisted of two lines, the first of which contains 17 syllables and the second 14. [2] Iroha uta played an important part in ethical teachings across the Satsuma han until the end of the Edo period. [1]

Shimazu Yoshihisa was a daimyō and the 16th Chief of Shimazu clan of Satsuma Province, the eldest son of Shimazu Takahisa.

Shimazu Yoshihiro was the second son of Shimazu Takahisa and the younger brother of Shimazu Yoshihisa. Traditionally believed to be the seventeenth head of the Shimazu clan, he was a skilled general during the Sengoku period who greatly contributed to the unification of Kyūshū.

Shimazu Tadatsune was a tozama daimyō of Satsuma, the first to hold it as a formal fief (han) under the Tokugawa shogunate, and the first Japanese to rule over the Ryūkyū Kingdom. As lord of Satsuma, he was among the most powerful lords in Japan at the time, and formally submitted to Tokugawa Ieyasu in 1602, to prove his loyalty, being rewarded as a result with the name Matsudaira Iehisa; Matsudaira being a branch family of the Tokugawa, and "Ie" of "Iehisa" being taken from "Ieyasu", this was a great honor. As of 1603, his holdings amounted to 605,000 koku.

Prince Shimazu Hisamitsu, also known as Shimazu Saburō, was a Japanese samurai of the late Edo period. Hisamitsu was virtual Super Potentate of Satsuma Domain.The younger brother of Shimazu Nariakira, Hisamitsu served as regent for his underage son Tadayoshi, who became the 12th and last daimyō of Satsuma Domain. Hisamitsu was instrumental in the efforts of the southern Satsuma, Chōshū, and Tosa clans to bring down the Tokugawa Shogunate. Hisamitsu held the court title of Ōsumi no Kami (大隈守). 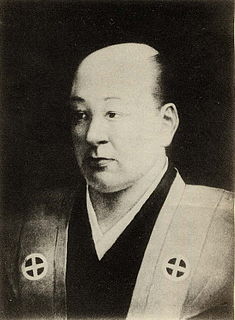 Shimazu Nariakira was a Japanese feudal lord (daimyō) of the Edo period, the 28th in the line of Shimazu clan lords of Satsuma Domain. He was renowned as an intelligent and wise lord, and was greatly interested in Western learning and technology. He was enshrined after death as the Shinto kami Terukuni Daimyōjin (照国大明神) in May 1863.

Shimazu is a Japanese surname. Notable people with the surname include:

Nejime Shigenaga was a Japanese samurai of the Sengoku period through Azuchi-Momoyama period. The son of Nejime Kiyotoshi, Shigenaga was a retainer of the Kimotsuki clan, and the 16th generation head of his family. He joined Kimotsuki Kanetsugu in the fight against the Shimazu in Ōsumi Province. However, following the Kimotsuki clan's defeat, Shigenaga saw that the family's position was untenable, so he independently concluded a peace agreement with Shimazu Yoshihisa. This incurred the wrath of Kimotsuki Kanesuke, who attacked him; however, the Shimazu were able to save Shigenaga from death. Later, Shigenaga became a retainer under Shimazu Yoshihisa, and assisted the Shimazu clan in issues of trade. Shigenaga is said to be the first person who encouraged the cultivation of mandarin oranges in Japan.

Iriki-In Shigetomo, the son of Iriki-In Shigetoshi, was a vassal under the Shimazu clan of Satsuma. The lord of the Shimazu clan, Shimazu Katsuhisa, suffered the rebellion of a kinsman, Sanehisa, and was forced to flee Satsuma during 1526. The Shimazu clan head was then passed on to Katsuhisa's eldest son, Shimazu Takahisa. Even though Takahisa was the new head, Katsuhisa still had authority over a good amount of land. Considering Shigetomo's lands were very close to that of the Shimazu's, he found himself in conflicts between the Sanehisa around Momotosugi.

The Tanegashima clan is a Japanese clan that originated on Tanegashima Island, just south of Kyūshū. From the late Sengoku era to the start of the Meiji era, the Tanegashima were retainers of the Shimazu clan of the Satsuma Domain. 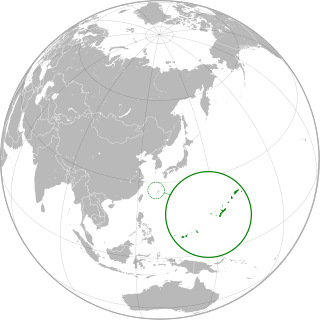 Shimazu Toshihisa was a Japanese samurai of the Azuchi-Momoyama period, son of Shimazu Takahisa, who served as a senior retainer of the Shimazu clan of Satsuma Province. He was fought in Battle of Mimigawa (1578) during Shimazu clan campaign to conquer Kyūshū and also the commander of Shimazu clan against Toyotomi Hideyoshi, when Hideyoshi invaded Kyushu (1587).

Shimazu Iehisa was a Japanese samurai of the Sengoku period, who was a member of the Shimazu clan of Satsuma Province. He was the fourth son of Shimazu Takahisa. He served in a command capacity during his family's campaign to conquer Kyūshū. His sons were Shimazu Toyohisa, Shimazu Tadanao, and Shimazu Mitsuhisa. He was nephew of Ten'ei-in from his mother side and later he married Kamehime and daughter of Shimazu Yoshitaka, Mitsuhime.

The Battle of Ichirai (市来鶴丸城の戦い) was fought in 1539 between two rival factions of the Shimazu clan.

The Battle of Momotsugi was fought on October 9, 1539 when an army of the Iriki-in clan stormed the castle of Iwaya, aligned with the rival Shimazu Sanehisa.

The Shimazu Estate was a shōen in southern Kyushu of Japan, covering large portions of Satsuma, Ōsumi and Hyūga Provinces. It was the largest shōen of medieval Japan. The Shimazu clan took its name from this estate as the clan succeeded the position of jitō.

Tanegashima Tokitaka was a Japanese daimyō of the Sengoku period, the 14th head of the Tanegashima clan. He is known for having first established contact with the Europeans, and producing the first European type firearms of Japan.