“Shin-Etsu” in the company's name derives from Shin'etsu Region, where the company established the first chemical plant as Shin-Etsu Nitrogen Fertilizer in 1926, though the company today is headquartered in Tokyo and has its manufacturing locations in 14 countries worldwide.

Silicon is a chemical element with the symbol Si and atomic number 14. It is a hard, brittle crystalline solid with a blue-grey metallic lustre, and is a tetravalent metalloid and semiconductor. It is a member of group 14 in the periodic table: carbon is above it; and germanium, tin, and lead are below it. It is relatively unreactive. Because of its high chemical affinity for oxygen, it was not until 1823 that Jöns Jakob Berzelius was first able to prepare it and characterize it in pure form. Its oxides form a family of anions known as silicates. Its melting and boiling points of 1414 °C and 3265 °C respectively are the second-highest among all the metalloids and nonmetals, being only surpassed by boron. Silicon is the eighth most common element in the universe by mass, but very rarely occurs as the pure element in the Earth's crust. It is most widely distributed in space in cosmic dusts, planetoids, and planets as various forms of silicon dioxide (silica) or silicates. More than 90% of the Earth's crust is composed of silicate minerals, making silicon the second most abundant element in the Earth's crust, after oxygen. Silicon is a natural element, and when not previously present has a residence time of about 400 years in the world's oceans. 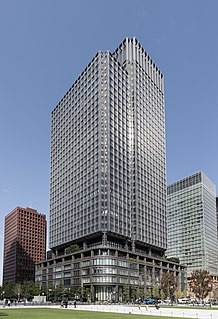 Applied Materials, Inc. is an American corporation that supplies equipment, services and software for the manufacture of semiconductor chips for electronics, flat panel displays for computers, smartphones and televisions, and solar products. The company also supplies equipment to produce coatings for flexible electronics, packaging and other applications. The company is headquartered in Santa Clara, California, in Silicon Valley.

Silicon Glen is a nickname for the high tech sector of Scotland, the name inspired by Silicon Valley in California. It is applied to the Central Belt triangle between Dundee, Inverclyde and Edinburgh, which includes Fife, Glasgow and Stirling; although electronics facilities outside this area may also be included in the term. The term has been in use since the 1980s. It does not technically represent a glen as it covers a much wider area than just one valley.

Dow Silicones Corporation, formerly known as Dow Corning Corporation, is an American multinational corporation headquartered in Midland, Michigan, United States. Originally established as a joint venture between The Dow Chemical Company and Corning Incorporated, Dow bought out Corning and Dow Corning became a 100% Dow subsidiary. After a brief existence as a DowDuPont-owned company, as Dow spun out from DowDuPont on April 1, 2019, it is now wholly owned by Dow and specializes in silicone and silicon-based technology, and is the largest silicone product producer in the world.

Silicone rubber is an elastomer composed of silicone—itself a polymer—containing silicon together with carbon, hydrogen, and oxygen. Silicone rubbers are widely used in industry, and there are multiple formulations. Silicone rubbers are often one- or two-part polymers, and may contain fillers to improve properties or reduce cost. Silicone rubber is generally non-reactive, stable, and resistant to extreme environments and temperatures from −55 to 300 °C while still maintaining its useful properties. Due to these properties and its ease of manufacturing and shaping, silicone rubber can be found in a wide variety of products, including: voltage line insulators, automotive applications; cooking, baking, and food storage products; apparel such as undergarments, sportswear, and footwear; electronics; medical devices and implants; and in home repair and hardware with products such as silicone sealants.

Solid is one of the four fundamental states of matter. The molecules in a solid are closely packed together and contain the least amount of kinetic energy. A solid is characterized by structural rigidity and resistance to a force applied to the surface. Unlike a liquid, a solid object does not flow to take on the shape of its container, nor does it expand to fill the entire available volume like a gas. The atoms in a solid are bound to each other, either in a regular geometric lattice, or irregularly. Solids cannot be compressed with little pressure whereas gases can be compressed with little pressure because the molecules in a gas are loosely packed. 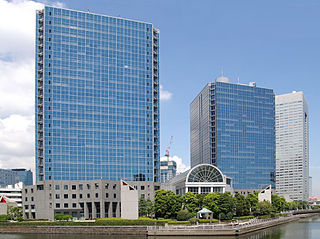 Hemlock Semiconductor Corporation is the largest producer of polysilicon in the United States. It is owned by Corning Inc. and Shin-Etsu Handotai, founded in 1961, and named after Hemlock, Michigan, the location of its factory. Its current facilities produce some 36,000 tons of polycrystalline silicon, ranking it among the top five producers worldwide.

Westlake Chemical is an international manufacturer and supplier of petrochemicals, polymers and fabricated building products, which are fundamental to various consumer and industrial markets. The company was founded by Ting Tsung Chao in 1986. it is the largest producer of low-density polyethylene (LDPE) in the US and ranks among the Forbes Global 2000. Westlake Chemical operates in two segments: Olefins and Vinyls, and is also an integrated producer of vinyls, with substantial downstream integration into polyvinyl chloride (PVC) building products.