The building's three-sided construction makes good use of available space, yet the building's design sacrifices valuable floor space by including a massive atrium running the entire height of the building. The building's most recognizable characteristic is its shape and structure. It is most simply described as triangular (a more apt description would be a triangle with all the corners cut off), hence why one of its nicknames is 'the Triangle'. [1] Also distinctive is the visible emergency elevator, which is used to transport cargo and not everyday passengers.

Construction began in November 1971 and was finished on March 6, 1974. At the time of its completion, its elevators were the fastest in the world at 540 meters per minute. It was the tallest building in Tokyo from March to September 1974 when it was surpassed by the Shinjuku Mitsui Building which is located just to the east of the Sumitomo building. It was developed by Sumitomo Realty & Development, the real estate arm of the Sumitomo Group, and previously housed Sumitomo Realty's headquarters.

A pioneering skyscraper in Shinjuku, many companies are tenants of the building, which has a restaurant and an observation room that serve as tourist attractions. The observation deck on the 51st floor has free admission and is open from 10:00 to 22:00, all year round (except on the first Sunday of February, fourth Sunday of August, December 31, and January 1, when the building is closed). [1]

In the 1984 film The Return of Godzilla , the Sumitomo Building was knocked over by Godzilla, crushing and breaking the Super X. [2] Also, in the Doraemon film Doraemon: Nobita and the Steel Troops (ドラえもん のび太と鉄人兵団, Doraemon: Nobita to Tetsujin Heidan), the building was accidentally destroyed in the World Inside the Mirror by the huge robot Zanda Claus. 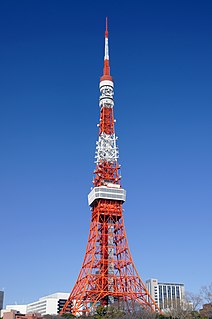 The Jin Mao Tower, also known as the Jinmao Building or Jinmao Tower, is an 88-story landmark skyscraper in Lujiazui, Pudong, Shanghai, China. It rises 420.5 metres tall. It contains a shopping mall, offices and the Grand Hyatt Shanghai hotel, which at the time of completion was the highest hotel in the world. Along with the Oriental Pearl Tower, the Shanghai World Financial Center and the Shanghai Tower it is part of the Lujiazui skyline seen from the Bund. It was the tallest building in China from its completion in 1999 until 2007, when it was surpassed by the Shanghai World Financial Center which is located close by. The Shanghai Tower, a 121-story building located next to these two buildings, surpassed the height of both these buildings in 2015, creating the world's first trio of adjacent supertall skyscrapers. 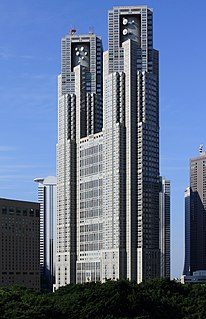 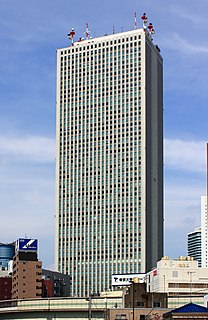 Sunshine 60 is a 60-story, mixed-use skyscraper located in Ikebukuro, Toshima, Tokyo, adjoining the Sunshine City complex. At the time of its completion in 1978, the 239.7 m (786 ft) building was the tallest in Asia, a title it held until 1985 when it was surpassed by the 63 Building in Seoul. Sunshine 60 was also the tallest building in Tokyo and Japan until the Tokyo Metropolitan Government Building was completed in 1991, and housed the world's fastest elevators until the opening of the Yokohama Landmark Tower in 1993; Mitsubishi Electric installed the elevators at both towers.

Nikken Sekkei (日建設計) is an architectural, planning and engineering firm from Japan, with headquarters in Chiyoda, Tokyo. The practice is defined under the Company Act of Japan as 株式会社 - Kabushiki-gaisha. The term can be translated as "stock company", "joint-stock company" or "stock corporation". Today (2019), Nikken Sekkei ranks as the second largest architectural practice in the world.

Mode Gakuen Cocoon Tower is a 204 metres, 50-story educational facility located in the Nishi-Shinjuku district in Shinjuku, Tokyo, Japan. The building is home to three educational institutions: Tokyo Mode Gakuen, HAL Tokyo, and Shuto Ikō. Completed in October 2008, the tower is the second-tallest educational building in the world and is the 17th-tallest building in Tokyo. It was awarded the 2008 Skyscraper of the Year by Emporis.

The Sompo Japan Head Office Building is the corporate headquarters for Sompo Japan Insurance. It is located in the district Nishi-Shinjuku in Shinjuku, Tokyo, Japan. At 200 metres (656 ft), the building is the 28th tallest building in Tokyo and the 33rd tallest in Japan. It was designed by Yoshikazu Uchida. 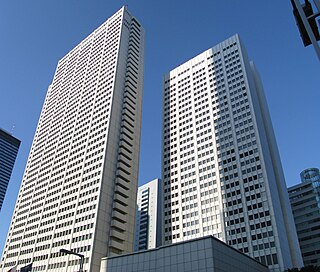 The Shinjuku NS Building is a skyscraper located in Shinjuku, Tokyo, Japan. The name comes from co-developers, Nihon Seimei and Sumitomo. Construction of the 134 meters, 30-story skyscraper was completed in 1982. It made an appearance in the film The Return of Godzilla (1984). 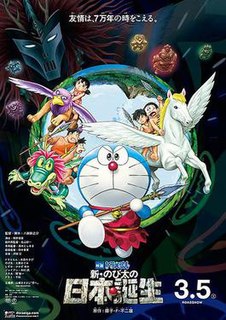 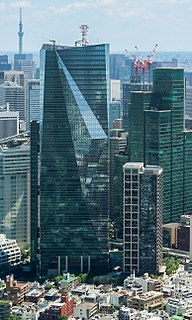