Shinkichi Tajiri (Los Angeles, December 7, 1923 – Baarlo, Netherlands, March 15, 2009) was an American sculptor who resided in the Netherlands from 1956 onwards. He was also active in painting, photography and cinematography.

A Japanese American, Tajiri was born in Watts, a working-class neighborhood of Los Angeles. He was the fifth of seven children born to Ryukichi Tajiri and Fuyo Kikuta, first generation emigrants (issei), who moved from Japan to the United States in 1906 and 1913.

In 1936, the family relocated to San Diego. His father died when he was fifteen. In 1940, Tajiri received his first lessons in sculpture from Donal Hord.

In 1942, Tajiri's family was evacuated to Poston War Relocation Center in Arizona. [1] He was a soldier, with the 442nd Regimental Combat Team, like his brother Vincent. They fought in Europe, from 1943 on and he was wounded in Italy. Shinkichi went back to Chicago to study at the Art Institute from 1946 to 1948.

In 1949 he went to Paris to study with Ossip Zadkine and then Fernand Léger. He met Karel Appel and Corneille in Paris and shows at the 1949 COBRA exhibition at the Stedelijk Museum, Amsterdam. In 1951 he went to Germany and taught at the Werkkunstschule Wuppertal. In 1955 he won a Golden Palm at Cannes, for his first short film, The Vipers , because of his experimental use of the language of film. From 1956 he lived in the Netherlands, since 1962 in Baarlo. He worked as a sculptor and painter. He exhibited at the famous Kassel documenta II, 1959; III, 1964 and IV, 1968. From 1969 Tajiri Shinkichi taught at the Hochschule für Bildende Künste at Berlin. 1969 and 1970 Shinkichi took pictures of every part of the Berlin Wall. In 1970 he went to Denmark and directed the award-winning documentary Bodil Joensen - en sommerdag juli 1970 about Bodil Joensen. In 1975 and 1976 he recreated the Daguerreotype: surreal portraits, nudes and daguerreotypes of the Wall.

COBRA was a European avant-garde movement active from 1948 to 1951. The name was coined in 1948 by Christian Dotremont from the initials of the members' home cities: Copenhagen (Co), Brussels (Br), Amsterdam (A).

Christiaan Karel Appel was a Dutch painter, sculptor, and poet. He started painting at the age of fourteen and studied at the Rijksakademie in Amsterdam in the 1940s. He was one of the founders of the avant-garde movement CoBrA in 1948. He was also an avid sculptor and has had works featured in MoMA and other museums worldwide.

Jacqueline de Jong is a Dutch painter, sculptor and graphic artist. She was born in the Dutch town of Hengelo to Jewish parents. Faced with the German invasion, they went into hiding. After an abortive escape attempt to England, her father Hans remained in Amsterdam while her mother and she made for Switzerland, accompanied by the Dutch painter Max van Dam. At the border they were captured by the French police, but just as they were about to be deported to the Drancy internment camp, they were rescued by the resistance, who helped them over the border. When they returned to the Netherlands following the war, Jacqueline could not speak Dutch. From 1947 on she went to school in Hengelo and Enschede.

The Stedelijk Museum Amsterdam, colloquially known as the Stedelijk, is a museum for modern art, contemporary art, and design located in Amsterdam, Netherlands. 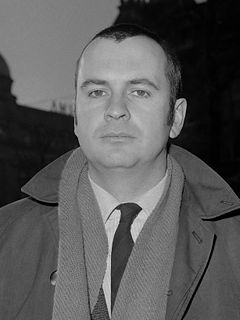 Johan van der Keuken was a Dutch documentary filmmaker, author, and photographer. In a career that spanned 42 years, Van der Keuken produced 55 documentary films, six of which won eight awards. He also wrote nine books on photography and films, his field of interest. For all his efforts, he received seven awards for his life work, and one other for photography.

Roman Cieślewicz was a Polish graphic artist and photographer.

Baarlo is a town in the southeastern Netherlands. It is located in the municipality of Peel en Maas, Limburg, about 6 km southwest of Venlo.

Thomas Scheibitz is a German painter and sculptor. Together with Tino Sehgal he created the German pavilion on the 51st Venice Biennale in 2005. He lives and works in Berlin.

Lucebert was a Dutch artist who first became known as the poet of the COBRA movement. 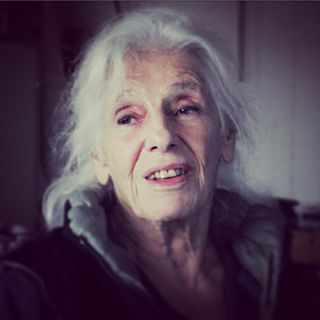 Josephine Gail Baer is an American painter associated with minimalist art. She began exhibiting her work at the Fischbach Gallery, New York, and other venues for contemporary art in the mid-1960s. In the mid-1970s, she turned away from non-objective painting. Since then, Baer has fused images, symbols, words, and phrases in a non-narrative manner, a mode of expression she once termed "radical figuration." She currently lives and works in Amsterdam, Netherlands.

Franz Wilhelm Koenigs was an international banker and art collector.

Bodil Bjarta Joensen was a Danish pornographic actress born in the village of Hundige, near Copenhagen. An animal lover, she ran a small entrepreneurial farm and animal husbandry business, and enjoyed celebrity status from her many pornographic films in which she engaged in sex acts with animals. 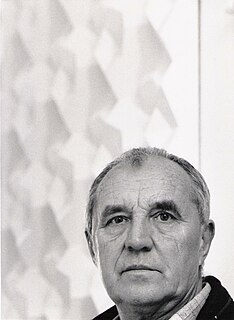 Gerard Caris is a Dutch sculptor and artist who has pursued a single motif throughout the course of his artistic career, the pentagon.

Miguel-Ángel Cárdenas, also known as Michel Cardena, was a Colombian-Dutch, New Realism and Pop Art painter and a pioneer of video art in the Netherlands. His works cover a variety of artistic media, including painting, drawing, video, photography, object assemblages and digital art.

Ans Wortel was a Dutch painter, poet and writer. She made gouaches and oil paintings, aquarelles, drawings, collages, lithographs, etchings, sculptures and glass sculptures. She was an autodidact and won the first prize at the biennale of Paris in 1963. She was one of the leading female artists of postwar Dutch modern art. There are some 50 books with contributions from or about Wortel.

Martine Theodora Bax is a Dutch-Canadian art historian and art critic in modern art. Her specializations are the work of Piet Mondrian and the relationship between art and Western Esotericism, especially Modern Theosophy and Anthroposophy.

Hans Felix Sigismund Baumann aka Felix H. Man was a photographer and later an art collector. In particular, he was a leading pioneer photojournalist, especially for Picture Post.

Casparus Bernardus Oorthuys, known as Cas, was a Dutch photographer and designer active from the 1930s until the 1970s.