Shinsei Bank, Limited (株式会社新生銀行, Kabushiki-gaisha Shinsei Ginkō) is a leading diversified Japanese financial institution that provides a full range of financial products and services to both institutional and individual customers. It is headquartered in Chuo, Tokyo. [2]

Shinsei Bank is the successor of the Long-Term Credit Bank of Japan , which had a government monopoly on the issuance of many long-term debt securities. Following the collapse of the Japanese asset price bubble in 1989, the bank was riddled with bad debts: the government nationalized it in 1998, and it was delisted from the Tokyo Stock Exchange. After several proposed mergers with domestic banks, LTCB was sold to an international group led by US-based Ripplewood Holdings in March 2000 for ¥121 billion ($1.2 billion U.S.), the first time in history that a Japanese bank came under foreign control. [3] Investor Christopher Flowers also played a major role in the buyout syndicate and remains a key shareholder of the company until August 2019, when the Japanese government acquired the shares held by his fund. [4] [5]

As part of the deal, the Japanese government insisted that LTCB maintain existing loan accounts for at least three years. [3] The final purchase agreement included a "defect warranty provision" (瑕疵担保条項, kashi tanpo jōkō) to the effect that Shinsei could demand within the next three years that the government purchase any claims which had fallen by twenty percent or more from book value. A similar provision was afforded Aozora Bank, the successor of LTCB's similarly beleaguered sister company Nippon Credit Bank.

LTCB was relaunched as "Shinsei Bank" (literally "Newborn" or "New Life" Bank) in June 2000, with new management and services. Many of Shinsei's managers had previous experience working for foreign financial institutions in Japan, such as CEO Thierry Porte (formerly of Morgan Stanley) and CIO Jay Dvivedi (formerly of Citibank). [6] Shinsei continued to use the Long-Term Credit Bank SWIFT code (LTCBJPJT).

Shinsei used the defect warranty provision to dispose of all the worst debts owed to the bank. Several companies which had used LTCB as their primary bank went bankrupt as a result, including Sogo (July, 2000) and the Dai-Ichi Hotel. This created a furor in Japan: politicians especially criticized Goldman Sachs, which advised on the sale of LTCB, for not warning the government of the risks inherent in the defect security provision.

Shinsei then raised ¥230 billion in an IPO on February 20, 2004. The purchase of Shinsei thus turned a profit of over ¥100 billion within four years. The success of the IPO intensified criticism of Shinsei, however: the government was estimated to have lost ¥4-5 trillion on the deal between lost investments and forced purchases of bad debt, and the profits from the deal even escaped Japanese taxation through the use of a foreign investment partnership. In April 2004, the bank exchanged its long-term credit banking license for a standard commercial banking license.

The Financial Services Agency issued an improvement order to Shinsei on June 29, 2007 after the revenues of the company fell dramatically below targets.

On April 25, 2009, it was announced that Shinsei Bank and Aozora Bank have entered into negotiations to integrate their operations in the summer of 2010, with an eye toward an eventual merger, however the talks collapsed in May 2010 amid disputes over capitalization and business strategy, as well as the abatement of the 2008 financial crisis.

In 2010, the bank sold its headquarters building near Hibiya Park and its operations center in Meguro in order to avoid falling below targets again due to investment writedowns during the subprime crisis in the United States. Shinsei moved its headquarters to the Nihombashi area of Chuo City in January 2011. [7]

Shinsei offers a number of unique services as part of its basic "PowerFlex" savings account, including:

The Shinsei banking system is based on the FLEXCUBE software developed by Oracle Financial Services Software Ltd. Formerly i-flex solutions.

Shinsei also gears many of its services toward resident foreigners in Japan, with English-language online banking and telephone support, as well as no requirement for a personal seal in order to open an account.

Shinsei combines its commercial and investment banking operations into an "Institutional Banking" division which engages in a broad range of commercial lending and equity investment. The IB division is affiliated with four subsidiary companies: Shinsei Investment Management, Shinsei Securities, Shinsei Servicer and Shinsei Trust and Banking. [9] Shinsei also does considerable investment business in Europe through subsidiaries in London and Frankfurt. 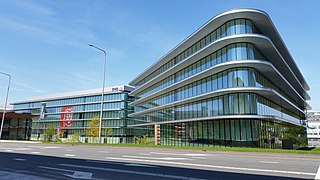 The ING Group is a Dutch multinational banking and financial services corporation headquartered in Amsterdam. Its primary businesses are retail banking, direct banking, commercial banking, investment banking, wholesale banking, private banking, asset management, and insurance services. With total assets of US$1.1 trillion, it is one of the biggest banks in the world, and consistently ranks among the top 30 largest banks globally. It is among the top ten in the list of largest European companies by revenue.

The Rizal Commercial Banking Corporation (RCBC) was established in 1960 as a development bank and is licensed by the Bangko Sentral ng Pilipinas (BSP) for both commercial and investment banking. It is one of the largest universal banks in the Philippines with total consolidated resources of Php 772.11 billion

CIMB Group Holdings Berhad is a Malaysian universal bank headquartered in Kuala Lumpur and operating in high growth economies in ASEAN. CIMB Group is an indigenous ASEAN investment bank. CIMB has a wide retail branch network with 1,080 branches across the region.

Aozora Bank, Ltd. is a Japanese commercial bank that offers service in 19 branches in Japan and in 2 overseas representative offices. 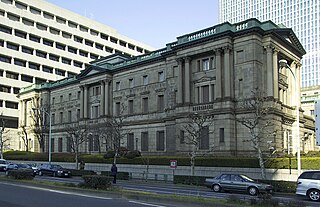 The Long-Term Credit Bank of Japan, Ltd., abbreviated LTCB in English and Chōgin (長銀) in Japanese, was founded in 1952 under the direction of the Shigeru Yoshida government to provide long-term financing to various industries in Japan. Along with the Industrial Bank of Japan and the Nippon Kangyo Bank, it was one of the major financiers of the postwar economic development of Japan. After extensive problems with bad debt in the 1990s, the bank was nationalized in 1998, and finally sold in 2000 to a group led by US-based Ripplewood Holdings in the first foreign acquisition of a Japanese bank; it is now known as Shinsei Bank.

Japan Post Bank Co., Ltd., is a Japanese bank headquartered in Tokyo. It is a corporation held by Japan Post Holdings, in which the government of Japan has a majority stake.

A non-banking financial institution (NBFI) or non-bank financial company (NBFC) is a financial institution that does not have a full banking license or is not supervised by a national or international banking regulatory agency. NBFC facilitate bank-related financial services, such as investment, risk pooling, contractual savings, and market brokering. Examples of these include insurance firms, pawn shops, cashier's check issuers, check cashing locations, payday lending, currency exchanges, and microloan organizations. Alan Greenspan has identified the role of NBFIs in strengthening an economy, as they provide "multiple alternatives to transform an economy's savings into capital investment which act as backup facilities should the primary form of intermediation fail."