Shochiku is one of the four members of the Motion Picture Producers Association of Japan (MPPAJ), and the oldest of Japan's "Big Four" film studios.

The company was founded in 1895 as a kabuki production company and later began producing films in 1920. [2] Shochiku is considered the oldest company in Japan involved in present-day film production, [3] but Nikkatsu began earlier as a pure film studio in 1912. Founded by the brothers Takejirō Ōtani (大谷竹次郎) and Matsujirō Shirai (白井松次郎), it was named “Matsutake” in 1902 after the combined kunyomi reading of the kanji take (bamboo) and matsu (pine) from their names, reflecting the traditional three symbols of happiness: bamboo, pine, and plum. The onyomi reading of Shōchiku first appeared in 1920 with the founding of the film production subsidiary "Shōchiku Kinema Gōmei-sha". [4]

Shochiku grew quickly in the early years, expanding its business to many other Japanese live theatrical styles, including Noh and Bunraku , and established a near monopoly due to its ownership of theaters, as well as kabuki and shimpa drama troupes. [3]

The company began making films in 1920, about a decade after its main rival Nikkatsu. The company sought to break away from the prevailing pattern of jidai-geki and to emulate Hollywood standards. It was the first film studio to abandon the use of female impersonators and brought new ideas, including the star system and the sound stage to Japan. It built its main studio at Kamata, named Shochiku Kamata Studio, between Tokyo and Yokohama, and hired Henry Kotani, a Japanese who had worked in Hollywood as an actor and cameraman to direct its first film, Island Woman (Shima no Onna, 1920). It also hired the prominent theater director Kaoru Osanai to head a school at the studio, which produced the film Souls on the Road (1921), a film directed by Minoru Murata which is considered "the first landmark film in Japanese history". [5]

However, Shochiku's early history was difficult, as audiences preferred the more action-packed jidai-geki historical swashbucklers over the shinpa melodramas, and its Kamata studios were destroyed by the 1923 Great Kantō earthquake, forcing a temporary relocation to Kyoto. [3]

With the reopening of its Kamata studios, Shochiku also introduced the shomin-geki genre, [6] with stories reflecting the lives of the lower-middle urban classes. These dramas proved immensely popular, and marked the start of the careers of many prominent directors (including Ozu, Naruse, and Hiroshi Shimizu) and actors (including Kinuyo Tanaka).

In 1931, Shochiku released the first “talkie” made in Japan: The Neighbor's Wife and Mine (Madamu to nyōbō, 1930). Filming became increasing difficult at the Kamata studios during the 1930s with the rapid industrialization of the surrounding area with munitions factories and metal foundries, and Shochiku decided to close the studio and relocate to Ofuna, near Kamakura in 1936. The following year, Shochiku Kinema was merged with its parent company, Shochiku Entertainment, and adopted the new name of Shochiku Corporation. [3]

During the war years, Shochiku's President, Shiro Kido, helped establish the Dai Nippon Eiga Kyokai (Greater Japan Film association), whose purpose was to coordinate the industry's efforts with Japanese government policy. From the mid-1930s until 1945, the films produced by Shochiku and other Japanese movie companies were propagandistic. After the surrender of Japan, Kido and Shochiku's co-founder Otani were arrested and charged with Class-A war crimes by the Allied occupation authorities. [3]

In 1953, after the end of the occupation, Kido returned to Shochiku and revived the melodramatic style of films which had been a Shochiku trademark in the pre-war era. Directors associated with Shochiku in this era included Ozu, Keisuke Kinoshita, and Noboru Nakamura. Many of the films during the 1950s were aimed primarily at female audiences. In particular, Hideo Oba's three-part What is Your Name? (Kimi no na wa?) in 1953 was the most commercially successful film of the period. [3] Ozu's Tokyo Story , made in 1953, later earned considerable accolades, being selected in the 2012 Sight & Sound international critics poll as the third best film of all time [7]

By the start of the 1960s, Shochiku's films were criticized as “old-fashioned” with the popularity of rival Nikkatsu’s Taiyo-zoku youth-orientated movies. The studio responded by launching the Japanese New Wave (Nuberu bagu) which also launched the career of Nagisa Oshima among others, [6] though Oshima soon went independent; the films of Oshima and other film makers were not financially successful and the company changed its policies. [6]

However, the growing threat from television led to the bankruptcy of Shochiku’s competitors, Shintoho in 1961 and Daiei in 1971, whereas Nikkatsu and Toei turned to gangster movies and soft pornography to maintain attendance. Shochiku continued to maintain its family-orientated audience largely due to the phenomenal success of the Otoko wa Tsurai yo series directed by Yoji Yamada from 1969 through 1997. However, with the death of its star Kiyoshi Atsumi, the series came to an end, and the company faced increasing financial difficulties. [3]

The Ofuna studio, was briefly transformed into a theme park, Kamakura Cinema World, but this was closed in 1998 and the site was sold off in 2000 to Kamakura Women's College. Since that time, Shochiku has relied on its film studio and backlot in Kyoto. Yamada’s “The Twilight Samurai” (Tasogare Seibei, 2002) was nominated for an Oscar as Best Foreign Language Picture. [3]

Shochiku served as a distributor of theatrical anime. Major titles have included the Cardcaptor Sakura films, Mobile Suit Gundam movies, Origin: Spirits of the Past , Piano no Mori , Ghost in the Shell , Fullmetal Alchemist the Movie: Conqueror of Shamballa , Fullmetal Alchemist: The Sacred Star of Milos , Sword of the Stranger , Fairy Tail the Movie: Phoenix Priestess , The Dog of Flanders and Jungle Emperor Leo .

Toho Co., Ltd. is a Japanese film, theater production and distribution company. It has its headquarters in Chiyoda, Tokyo and is one of the core companies of the Hankyu Hanshin Toho Group. Outside of Japan, it is best known as the producer and distributor of many kaiju and tokusatsu films, the Chouseishin tokusatsu superhero television franchise, the films of Akira Kurosawa, and the anime films of Studio Ghibli, TMS Entertainment and OLM, Inc. Other famous directors, including Yasujirō Ozu, Kenji Mizoguchi, Masaki Kobayashi, and Mikio Naruse, also directed films for Toho.

Shintoho Co. Ltd. was a Japanese movie studio. It was one of the big six film studios during the Golden Age of Japanese cinema. It was founded by defectors from the original Toho company following a bitter strike in 1947. 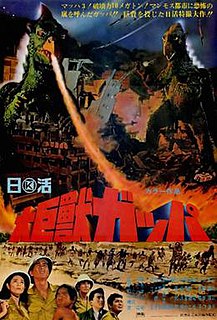 Gappa the Triphibian Monster is a 1967 Japanese kaiju film directed by Haruyasu Noguchi. The film is about a group of Japanese reporters who discover an infant monster called a Gappa on Obelisk Island. The reporters cage the creature and take it to Japan where it becomes a media attraction. This angers the natives of the island and Gappa's full-grown parents, who head toward Japan to find their child. Its plot virtually duplicates that of the 1961 British film Gorgo.

The X from Outer Space is a 1967 Japanese science fiction kaiju film that was directed by Kazui Nihonmatsu and stars Eiji Okada and Toshiya Wazaki.

Ghost-Cat of Gojusan-Tsugi is a 1956 Japanese horror (J-Horror) film directed by Bin Kado for Daiei Film. It was filmed in black and white, Academy ratio format (fullscreen) and was never dubbed in English.

Kaidan Kasane-ga-fuchi, also known as The Depths, or The Ghost of Kasane, is a 1957 black-and-white/ Scope Japanese horror film directed by Nobuo Nakagawa for Shintoho Films. The screenplay was based on a story called Shinkei Kasanegafuchi by Encho Sanyutei. The film was never dubbed in English and is only available in subtitled format. It was a short film, running 57 minutes.

Ghost of Saga Mansion is a 1953 Japanese horror film directed by Ryohei Arai. It was filmed in Black and White, academy ratio format. It was never dubbed in English, nor shown in the United States theatrically.

Ghost-Cat of Arima Palace is a black-and-white 1953 Japanese horror film directed by Ryohei Arai for Daiei Film. It was filmed in black and white, Academy ratio format (fullscreen) and was never dubbed in English. It was filmed before in 1937 under the title Arima Neko. 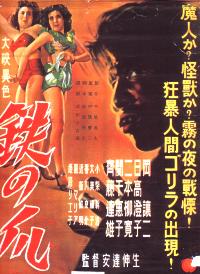 Tetsu no tsume is a 1951 black-and-white Japanese horror film (J-Horror) directed by Nobuo Adachi for Daiei Films. It was shot in Black and White, Academy ratio full-screen, and was never dubbed in English. The film was never shown in the United States, and was only available on laserdisc in Japan.

Saru no Gundan is a 1974 Japanese science fiction television series. It is not connected to Pierre Boulle's Planet of the Apes. The series was produced by Tsuburaya Productions, and shot on 16mm film in color. It ran on Tokyo Broadcasting System from October 6, 1974 to March 30, 1975, lasting a total of 26 episodes. 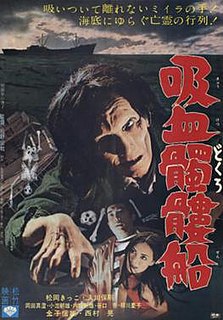 The Living Skeleton is a 1968 Japanese tokusatsu horror film directed by Hiroshi Matsuno. The film's plot begins in the past where a gang of pirates commandeer a ship and kill everyone on board. Three years later in a seaside village, a Catholic priest has offered shelter to Saeko as her twin sister, Yoriko has disappeared with her new husband at sea. Saeko later scuba dives with her boyfriend, the couple find a group of submerged human skeletons, chained together at the ankles near the ocean floor. That night, a ghost ship appears in the mist offshore as a voice from the ship calls out for Saeko.

Sumiko Mizukubo born as Tatsuko Ogino, is a former Japanese actress active during the silent film era in the early 1930s. She was born, Meguro-ku, Tokyo, Japan. She attended the Senzoku High School for Girls, before training at the revue and musical theatre company of Shochiku. Her sister Kikuko Tagawa was a dancer. In the revue there were other actors who would late appear in film including Yumeko Aizome and Kimiyo Otsuka. Mizukubo acted at the Shochiku Kamata and the Nikkatsu Tamagawa studios, and appeared in 39 movies as a young star, including films directed by Naruse Mikio and Ozu Yasujiro. She quit film-acting in 1935, but continued to dance and appear in stage roles.