Hiratsuka is a city located in Kanagawa Prefecture, Japan.

Yasuharu Sorimachi is a former Japanese football player and manager. He played for Japan national team.

Keisuke Kurihara is a former Japanese football player and manager. 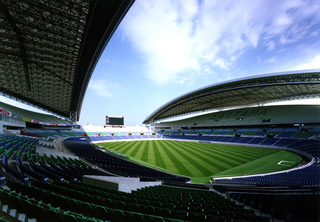 The All Japan High School Soccer Tournament of Japan, commonly known as "Winter Kokuritsu", is an annual nationwide high school association football tournament. It is the largest scale amateur sport event in Japan, even as soccer continues to gain more attention.

Takafumi Hori is a former Japanese football player and manager. His brother Naoto Hori is also a footballer.

Claudionor Souza de Jesus is a Brazilian footballer who currently plays as an attacking midfielder for Mito HollyHock on loan from Shonan Bellmare.

Fujita Soccer Club Mercury (フジタ・サッカークラブ・マーキュリー) was a women's football team from Hiratsuka which played in Division 1 of Japan's Nadeshiko League. It founded the league back in 1989. The club was disbanded in 1999.

Koya Yuruki is a Japanese footballer who plays as a midfielder for Urawa Red Diamonds in the J1 League.

Shōnan, shounan, or shonan may refer to:

1994 Emperor's Cup Final was the 74th final of the Emperor's Cup competition. The final was played at National Stadium in Tokyo on January 1, 1995. Bellmare Hiratsuka won the championship.