Shubal Stearns (sometimes spelled Shubael) (28 January 1706 – November 20, 1771), was a colonial evangelist and preacher during the Great Awakening. He converted after hearing George Whitefield and planted a Baptist Church in Sandy Creek, Guilford County, North Carolina. [1] Stearns' highly successful ministry was related to the rise and expansion of the Separate Baptists [1] — especially in much of the American South.

Stearns was born in Boston. His family were members of the Congregational church in Tolland, Connecticut, when in 1745 he heard evangelist George Whitefield. [2] Whitefield preached that, instead of trying to reform the Congregational church over doctrinal issues, members needed to separate from it; hence his followers were called the "New-Lights". Stearns was converted, became a preacher, and adopted the Great Awakening's view of revival and conversion. The "New Lights" also came to be called the "Separates", in part because they pointed to 2 Cor. 6:17 "be ye separate", ie, from the mainstream "Old Light" Congregational church. [2]

Stearns' church became involved in the controversy over the proper subjects of baptism in 1751. Soon, Stearns rejected infant baptism and sought baptism at the hands of Wait Palmer, Baptist minister of Stonington, Connecticut. By March, Shubal Stearns was ordained into the Baptist ministry by Palmer and Joshua Morse, the pastor of New London, Connecticut. His church of "Separates", by becoming Baptists, were from then on to be known as the Separate Baptists.

In 1754, Stearns and some of his followers moved south to Opequon, Virginia, at that time on the western frontier. Here he joined Daniel Marshall and wife Martha (Stearns' sister), who were already active in a Baptist church there. During his brief time in Virginia, Stearns and Marshal preached the Gospel with great zeal; they were accused of being "disorderly ministers" by some stalwarts, who complained to the Philadelphia Association, but this charge was dismissed.

On November 22, 1755, Stearns and his party moved further south to Sandy Creek, in Guilford County, North Carolina to build a new church. This party consisted of eight men and their wives, mostly relatives of Stearns. He pastored at Sandy Creek until his death. From there, Separate Baptists spread in the South. The church quickly grew from 16 members to 606. [3] Church members moved to other areas and started other churches.

The Sandy Creek Association was formed in 1758. Morgan Edwards, a Baptist minister who visited Sandy Creek the year after Stearns' death, recorded that, "in 17 years, [Sandy Creek] has spread its branches westward as far as the great river Mississippi; southward as far as Georgia; eastward to the sea and Chesopeck [sic] Bay; and northward to the waters of the Pottowmack [sic]; it, in 17 years, is become mother, grandmother, and great grandmother to 42 churches, from which sprang 125 ministers." Based on the testimony of those who remembered him, Edwards described Stearns as fervent and charismatic preacher who was capable of inspiring the most powerful emotions in his congregation.

None of Stearns' sermons has survived in writing. His central theme was recounted as discussing the need for followers of Christ to be "born again" from within. At first churchgoers in North Carolina found this a difficult concept. who never thought of their religion as anything more than external. [2]

But, Stearns' style of preaching and emphasis on internal conversion were highly important to Southern religion. He became the model for many other preachers who sought to copy his example, down to the least gesture or inflection of voice. Stearns believed that God pours his spirit like water upon a new believer, requiring no special learning or instruction; and this 'outpouring' swiftly became a flood that spread from Sandy Creek throughout all parts of the southern frontier. [4] [5]

Stearns was married to Sarah Johnson, but they never had children. 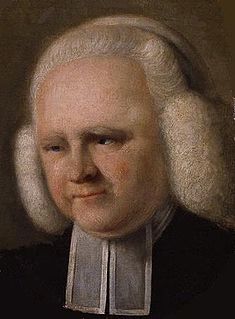 The Great Awakening refers to a number of periods of religious revival in American Christian history. Historians and theologians identify three, or sometimes four, waves of increased religious enthusiasm between the early 18th century and the late 20th century. Each of these "Great Awakenings" was characterized by widespread revivals led by evangelical Protestant ministers, a sharp increase of interest in religion, a profound sense of conviction and redemption on the part of those affected, an increase in evangelical church membership, and the formation of new religious movements and denominations.

The Second Great Awakening was a Protestant religious revival during the early 19th century in the United States. The Second Great Awakening, which spread religion through revivals and emotional preaching, sparked a number of reform movements. Revivals were a key part of the movement and attracted hundreds of converts to new Protestant denominations. The Methodist Church used circuit riders to reach people in frontier locations. The Second Great Awakening led to a period of antebellum social reform and an emphasis on salvation by institutions. The outpouring of religious fervor and revival began in Kentucky and Tennessee in the 1790s and early 1800s among the Presbyterians, Methodists and Baptists. The awakening brought comfort in the face of uncertainty as a result of the socio-political changes in America. 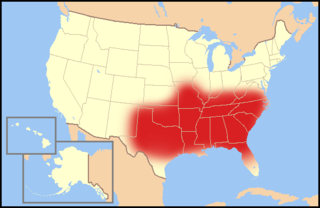 The Bible Belt is a region of the Southern United States in which socially conservative evangelical Protestantism plays a strong role in society and politics, and church attendance across the denominations is generally higher than the nation's average. The region contrasts with the religiously diverse Midwest and Great Lakes, and the Mormon Corridor in Utah and southern Idaho.

The Separate Baptists were an 18th-century group of Baptists in the United States, primarily in the South, that grew out of the Great Awakening.

Gaston Barnabas Cashwell was an early Pentecostal leader in the southern United States. He was born in Sampson County, North Carolina.His importance lies in bringing several Holiness movements into the Pentecostal camp.

James Davenport (1716–1757) was an American clergyman and itinerant preacher noted for his often controversial actions during the First Great Awakening.

The terms Old Lights and New Lights are used in Protestant Christian circles to distinguish between two groups who were initially the same, but have come to a disagreement. These terms have been applied in a wide variety of ways, and the meaning must be determined from each context. Typically, if a denomination is changing, and some refuse to change, and the denomination splits, those who did not change are referred to as the "Old Lights" and the ones who changed are referred to as the "New Lights".

Martha Stearns Marshall (1726–1771) was the wife of a Separate Baptist preacher in the Southern United States. She spread the gospel alongside her husband, Daniel Marshall (1706–84), who is generally regarded as the first great Baptist leader in the state of Georgia. Her husband was once jailed in Virginia for refusing to stop preaching the gospel. Although she was three months pregnant at the time, she exhorted those around that it was wrong to forbid a man to preach the Biblical truth of baptism. Her words convicted a young man named Cartledge and he became a preacher; she also converted the arresting constable and magistrate. She often stood alongside her brother Shubal Stearns and spoke at Baptist meetings. Martha also assisted her husband Daniel in his churches. She gave birth to six sons and two daughters. 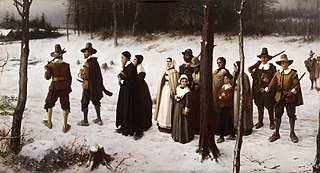 Christianity was introduced with the first European settlers beginning in the 16th and 17th centuries. Colonists from Northern Europe introduced Protestantism in its Anglican and Reformed forms to Plymouth Colony, Massachusetts Bay Colony, New Netherland, Virginia Colony, and Carolina Colony. The first arrivals were adherents to Anglicanism, Congregationalism, Presbyterianism, Lutheranism, Quakerism, Anabaptism and the Moravian Church from British, German, Dutch, and Nordic stock. America began as a significant Protestant majority nation. Significant minorities of Roman Catholics and Jews did not arise until the period between 1880 and 1910.

The Polegreen Church, also known as the Hanover Meeting House, is the site of what may be the first non-Anglican church in Virginia. It was named after a 17th-century landowner, George Polegreen.

William Tennent III was a Presbyterian pastor and South Carolina politician. He was born and educated in northern Colonial America, but spent the latter part of his life in the southern state of South Carolina. He was a prominent advocate for the dis-establishment of any state religion. He is known for his opposition to British colonial policy, publishing patriotic essays in support of the revolution. He was selected to travel in 1775 into the "back county" of South Carolina to convert Loyalists to the cause. In the state assembly, he lobbied for religious liberty in the drafting of state constitutions.