Shuishiying (Chinese :水师营; pinyin :shuǐ shī yíng) were the camp sites or office buildings of the Naval Forces (Chinese :水师) during the later days of the Qing Dynasty of China.

The most famous Shuishiying was in Lüshunkou District, Dalian, Liaoning, where the ceasefire treaty of the Battle of Lüshun was signed between Anatoly Stessel and Maresuke Nogi, representing Russia and Japan respectively, in 1905, during the Russo-Japanese War. 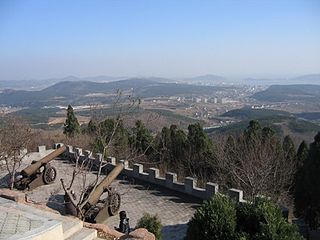 Lüshunkou District is a district of Dalian, in Liaoning province, China. Also called Lüshun City or literally Lüshun Port, it was formerly known as both Port Arthur (亚瑟港; 亞瑟港; Yàsè Gǎng; Russian: Порт-Артур, translit. Port-Artur and Ryojun. The district's area is 512.15 square kilometres and its permanent population as of 2010 is 324,773. 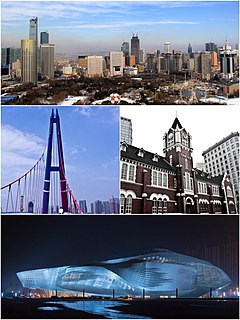 Dalian is a major city and seaport in the south of Liaoning Province, China. It is the southernmost city of the Liaodong Peninsula. Dalian is the province's second largest city and has sub-provincial administrative status. The Shandong Peninsula lies southwest across the Bohai Strait and Korea lies across the Yellow Sea to the east. 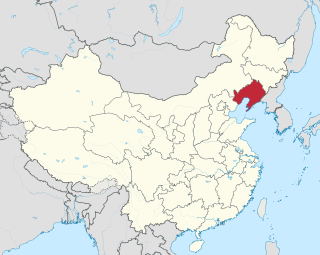 Liaoning is a province located in the northeastern part of China, being the smallest but the most populous province in the region. The modern Liaoning province was established in 1907 as Fengtian or Fengtien province and was renamed Liaoning in 1929, also known as Mukden Province at the time for the Manchu pronunciation of Shengjing, the former name of the provincial capital Shenyang. Under the Japanese-puppet Manchukuo regime, the province reverted to its 1907 name, but the name Liaoning was restored in 1945 and again in 1954.

Port Arthur may refer to: 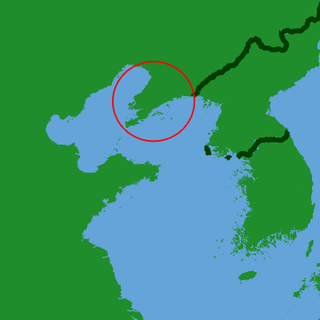 The Liaodong Peninsula is a peninsula in Liaoning Province of Northeast China, historically known in the West as Southeastern Manchuria. Liaodong means "East of the Liao River"; referring to the Liao River which divided the Yan commanderies of Liaoxi and Liaodong during time of the Warring States period.

The Kwantung Leased Territory was a Russian-leased territory (1898–1905), then a Japanese-leased territory (1905–1945) in the southern part of the Liaodong Peninsula in the Republic of China that existed from 1898 to 1945. It was one of the territorial concessions that the Chinese government under the Qing Dynasty was compelled to award to foreign countries during the second half of the 19th century. The territory included the militarily and economically significant ports of Lüshunkou and Dalian.

Northeast China or Dongbei is a geographical region of China. It also historically corresponds with the term Inner Manchuria in the English language. It consists specifically of the three provinces of Liaoning, Jilin, and Heilongjiang, collectively referred as the Three Northeastern Provinces (东北三省), but broadly also encompasses the eastern part of Inner Mongolia. The region is separated from Far Eastern Russia to the north largely by the Amur, Argun, and Ussuri rivers, from North Korea to the south by the Yalu River and Tumen River, and from the Inner Mongolian Autonomous Region to the west by the Greater Khingan Range. The heartland of the region is the Northeast China Plain.

The Battle of Nanshan was one of many vicious land battles of the Russo-Japanese War. It took place on 24–26 May 1904 across a two-mile-wide defense line across the narrowest part of the Liáodōng Peninsula, covering the approaches to Port Arthur and on the 116-meter high Nanshan Hill, the present-day Jinzhou District, north of the city center of Dalian, Liaoning, China. 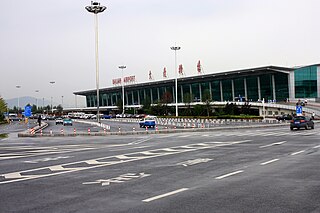 Dalian Zhoushuizi International Airport is the airport serving the city of Dalian in Liaoning Province, China. It is located in Ganjingzi District, about 10 km (6 mi) northwest of the city center. In 2014 the airport handled 17,203,640 passengers, making it the busiest airport in Northeast China and the 16th busiest nationwide. The airport is the hub for Dalian Airlines and a focus city for China Southern Airlines and Hainan Airlines. As Zhoushuizi Airport has reached its designed capacity, the new Dalian Jinzhouwan International Airport is being built on reclaimed land to replace it.

Dalian Bay, known historically as Talianwan and Talien-hwan, is a bay on the southeast side of the Liaodong Peninsula of Northeast China, open to Korea Bay in the east. Downtown Dalian lies along the southern shore of the bay. Its significance is that it is ice-free year-round, while Jinzhou Bay on the other, northwest side of the peninsula is part of the Bohai Sea, and is shallow and closed by ice for four months of the winter. 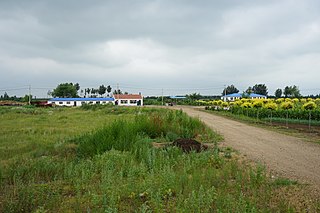 Ang'angxi is a county-level district of the city of Qiqihar in Heilongjiang province, People's Republic of China. It has an area of 623 km2 (241 sq mi) and a population of approximately 90,000. 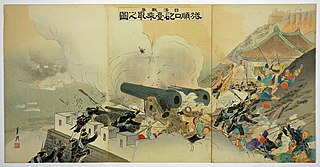 The Battle of Lüshunkou was a land battle of the First Sino-Japanese War. It took place on 21 November 1894 in Lüshunkou, Manchuria between the forces of the Empire of Japan and the Empire of China. It is sometimes referred to archaically in western sources as the Battle of Port Arthur.

The Dalian Metro or Dalian Subway is a rapid transit system in the city of Dalian, Liaoning, China. The metro opened on 1 May 2003. The system currently in operation consists of 4 lines: Line 1, Line 2, Line 3, and Line 12. 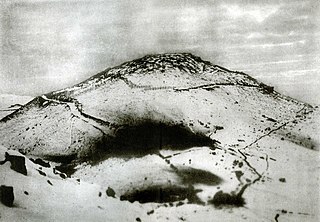 203 Hill is a high ground located in Lushunkou District, Dalian City, Liaoning Province, China. In 1904-1905, one of the fiercest battles was fought between the Japanese and Russian armies in the Siege of Port Arthur, during the Russo-Japanese War.

Lüshun railway station is located in Lüshunkou District of Dalian City, China, and is the final stop of the Dalian-Lushun branch of the Dalian-Harbin railway. It sits on the east side of the Long River, within a hundred meters of the Lüshun Naval Port, its building being of the Russian-style wooden architecture. 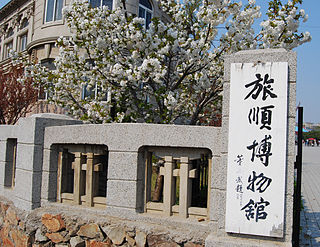 The Lüshun Museum is a museum in Lüshunkou District, Dalian, Liaoning, China. It was established in 1915 when this area was Japan's leased territory and is known for its exhibit of the mummies that Kozui Otani collected during his expeditions 1901-10 to Central Asia. 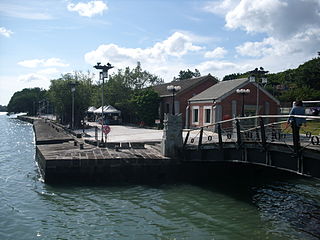 The Tamsui Customs Wharf is a wharf in Tamsui District, New Taipei, Taiwan. Until today, this is the only remaining pier in Taiwan built by the Qing Dynasty and being used as naval base today.

Lüshun Port in Lüshunkou District, Dalian City, Liaoning Province, China, refers to the original Lüshun Naval Port for military use or the New Lüshun Port for commercial use. This is the Port known in colonial times as Port Arthur.