Shyama Charan Pati (1940 – 29 October 2020) was an Indian dancer, known as one of the leading exponents of the Seraikala tradition of Chhau, a martial dance form of India. [1] He was a member of the Court of the Central University of Jharkhand. [2]

He was born in 1940 in a poor Brahmin family in the village of Icha in the Indian state of Jharkhand, [3] and moved to Jamshedpur and trained Kathak and Bharat Natyam under Guru Ban Bihari Acharya. [4] Later, he also trained under gurus such as Panchanan Singh Deo and Tarini Prasad Singh Deo. [3] He trained many students such as Sujata Maheshwari [5] and Sovanabrata Sircar [6] and performed on various stages in India and abroad. [7] The Government of India awarded him the fourth highest civilian honour of the Padma Shri, in 2006, for his contributions to Indian dance. [8] His daughter, Susmita Pati, is also an accomplished Chhau dancer. [1] 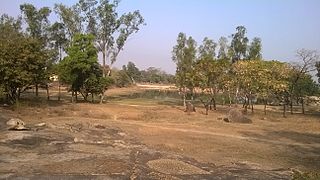 Reela Hota is an odissi dance performer, educator and producer, who has several performances to her credit. Daughter of Yoga Guru, Bijoylaxmi Hota and former bureaucrat Purna Chandra Hota, Reela was exposed to dance, yoga & ashram life since childhood. Having trained under the 3 doyens of Odissi dance, Guru Gangadhar Pradhan, Srimati Madhavi Mudgal and Guru Kelucharan Mohapatra, she inculcated perfect rhythm, sophistication, grace and presentation skills. A trend setter, Reela Hota pioneered in making Indian spiritual philosophy such as Yoga, Kundalini and Sanskrit the theme of her performances and is credited for adding a new dimension to Odissi Dance - the spiritual aspect.

Sai, Ananta Charan (1915–89) Mayurbhanj Chhau dance practitioner. Born in a family of Chhau performers in Mayurbhanj, he studied under his father Radhamohan Sai and others gurus of chhau dance such as Dibakar Bhanj Deo and Mohammad Rejak Khan. Ananta Charan Sai died in 1989.

Makar Dhwaja Darogha was an Indian classical dancer and guru, known for his expertise in the classical dance form of Chhau. He died on 17 February 2014 at his residence in Saraikela in Jharkhand, India due to old age illnesses. The Government of India honored him in 2011, with the fourth highest civilian award of Padma Shri.

Gopal Prasad Dubey is an Indian classical dancer, known for his expertise in the Indian classical dance form of Chhau. He is considered by many as the leading exponent of the Seraikella variant of the art form. Dubey was honored by the Government of India, in 2012, with the fourth highest Indian civilian award of Padma Shri.

Gambhir Singh Mura was an Indian tribal dancer known for his contributions to the tribal martial dance of Chhau. He was an exponent of the Purulia school of Chhau.

Bhagaban Sahu was an Indian folk dancer, teacher and choreographer, known for codifying the folk dance forms of Odisha. He was born on 21 September 1914 at Ganjam in the Indian state of Odisha in a Brahmin family and took to folk dancing. He was credited with efforts to revive the traditional Odissi dance forms such as Baagh Naach, Stilt dance, Jodi sankha, Laudi, Paika dance and Chadheia chadheiani. He taught the villagers about these dance forms and trained them on the art. He was the choreographer of the popular tiger dance sequence in the 1989 Bengali movie, Bagh Bahadur, directed by Buddhadev Dasgupta.

Shashadhar Acharya is a Chhau dance exponent from Saraikela, Jharkhand, India. In 2020, he received the Padma Shri honour from the Government of India for his contribution in the field of Arts.

Charida is a village in the Baghmundi CD block in the Jhalda subdivision of the Purulia district in the state of West Bengal, India.