Siba Sheikh Khidir ( ‹See Tfd› Kurdish : Sîba Şêx Xidir ,سیبا شێخ خدر‎, [2] [3] Arabic : الجزيرة‎, romanized: al-Jazirah, also Jazira or Jazeera) is a Yazidi village located in the Sinjar District of the Ninawa Governorate in northern Iraq. The village is located south of the Sinjar Mount. It belongs to the disputed territories of Northern Iraq. It was one of two villages targeted in the 2007 Yazidi communities bombings against the local Yazidi community. [4] [5] [6] [7]

Yazidism, or Sharfadin, is a monotheistic faith followed by the mostly Kurmanji-speaking Yazidi people and based on belief in one God who created the world and entrusted it into the care of seven Holy Beings, known as Angels. Preeminent among these Angels is Tawûsê Melek who is the leader of the Angels and who has authority over the world. 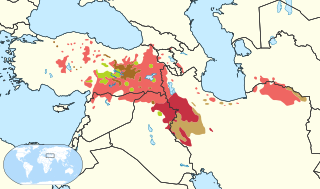 Kurmanji, also termed Northern Kurdish, is the northern dialect of the Kurdish languages, spoken predominantly in southeast Turkey, northwest and northeast Iran, northern Iraq, northern Syria and the Caucasus and Khorasan regions. It is the most spoken form of Kurdish and mother tongue to other ethnic minorities in Kurdistan as well, including Armenians, Chechens, Circassians, and Bulgarians. 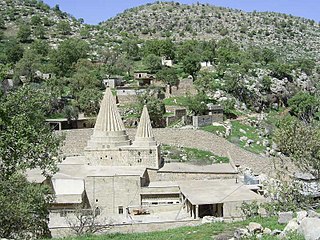 Sheikh ‘Adī ibn Musāfir was a Yazidi Sheikh born in the 1070s in the Beqaa Valley of present-day Lebanon. ‘Adī is said to have been born in the village of Bait Far, near Baalbek, where the house of his birth was – and still is – a place of pious pilgrimage. The Yazidi consider him an avatar of Tawûsê Melek, which means "Peacock Angel". His tomb at Lalish, Iraq is a focal point of Yazidi pilgrimage. 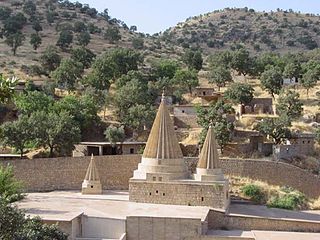 Lalish is a mountain valley and temple in Kurdistan Region in Iraq. It is the holiest temple of the Yazidis. It is the location of the tomb of Sheikh Adi ibn Musafir, a central figure of the Yazidi faith. 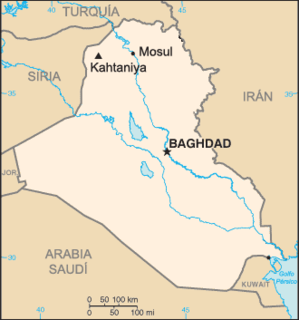 The 2007 Yazidi communities bombings occurred on August 14, 2007, when four coordinated suicide bomb attacks detonated in the Yazidi towns of Til Ezer (al-Qahtaniyah) and Siba Sheikh Khidir (al-Jazirah), near Mosul in Iraq.

Yazidis are an endogamous and mostly Kurmanji-speaking group of contested ethnic origin, indigenous to Iraq, Syria, and Turkey. The majority of Yazidis remaining in the Middle East today live in Iraq, primarily in the Nineveh and Dohuk governorates. The Yazidi religion is monotheistic and can be traced back to ancient Mesopotamian religions and it also has some similarities with Abrahamic religions. 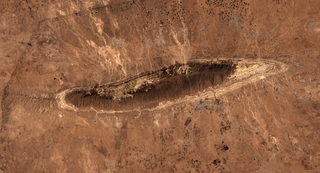 The Sinjar Mountains are a 100-kilometre-long (62 mi) mountain range that runs east to west, rising above the surrounding alluvial steppe plains in northwestern Iraq to an elevation of 1,463 meters (4,800 ft). The highest segment of these mountains, about 75 km (47 mi) long, lies in the Nineveh Governorate. The western and lower segment of these mountains lies in Syria and is about 25 km (16 mi) long. The city of Sinjar is just south of the range. These mountains are regarded as sacred by the Yazidis.

The Şengal Resistance Units, formerly called King Peacock, is a Yazidi militia formed in Iraq in 2007 to protect the Yazidi community in Iraq in the wake of attacks by Iraqi insurgents. It is the second largest Yazidi militia, after the Êzîdxan Protection Force (HPÊ). However, it is much more active than the HPÊ in fighting against the Islamic State of Iraq and the Levant (ISIL).

Ba'adra (also written Baadre, Badra or Bathra, is a Yazidi town located in the Shekhan District of the Ninawa Governorate in northern Iraq. The town is located in the Nineveh plains. It belongs to the disputed territories of Northern Iraq. 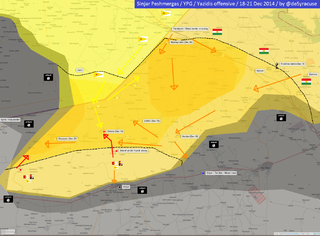 The Sinjar offensive was a combination of operations of Kurdish Peshmerga, PKK and People's Protection Units forces in December 2014, to recapture regions formerly lost to the Islamic State of Iraq and the Levant in their August offensive.

The November Sinjar offensive was a combination of operations of Kurdish Peshmerga, PKK, and People's Protection Units forces in November 2015, to recapture the city of Sinjar from the Islamic State of Iraq and the Levant. It resulted in a decisive victory for the Kurdish forces, who expelled the ISIL militants from Sinjar and regained control of Highway 47, which until then had served as the major supply route between the ISIL strongholds of Raqqa and Mosul.

The Êzîdxan Women's Units is a Yazidi all-women militia formed in Iraq in 2015 to protect the Yazidi community in the wake of attacks by the Islamic State of Iraq and the Levant and other Islamist groups that view Yazidis as pagan infidels. 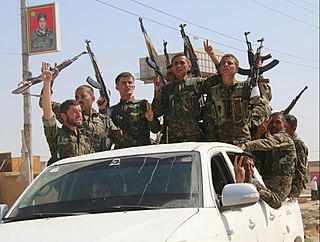 The Sinjar Alliance, full name as Ezidkhan Command for Liberating Sinjar, is a joint command of two Yazidi militias, the Sinjar Resistance Units (YBŞ), and the Êzîdxan Women's Units (YJÊ). Both militias are supported by the Kurdistan Workers' Party (PKK). The alliance was originally created in the end of October 2015, as a response to ISIS attacks on Sinjar City in August 2014, and was aimed to establish Democratic Confederalism and a Yazidi autonomous region within the Kurdistan Region. 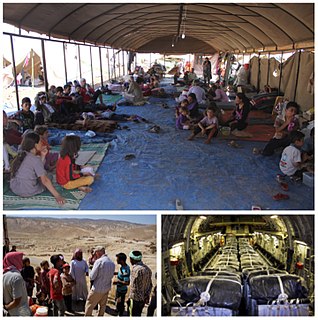 The Islamic State of Iraq and the Levant is recognized by the United Nations as the perpetrator of a genocide of Yazidis in Iraq. The genocide led to the expulsion, flight and effective exile of the Yazidis from their ancestral lands in Northern Iraq whose women and girls were forced into sexual slavery by the Islamic State and whose men were killed by the thousands. The genocide led to the abduction of Yazidi women and massacres that killed five thousand Yazidi civilians during what has been called a "forced conversion campaign" being carried out in Northern Iraq by ISIL, starting in 2014. The genocide happened following the Kurdish Peshmerga withdrawal, which left the Yazidis defenseless.

Sheikh Khairy Khedr was the Commander and founder of the Yazidi militia Malik Al-Tawus Troop, which later became the Sinjar Resistance Units. He was born in Siba Sheikh Khidir (Jazeera).

Kocho is a Yazidi village in the Sinjar District, southern of the Sinjar Mountains in the Nineveh Governorate of northern Iraq. It belongs to the disputed territories of Northern Iraq. The village gained international fame in 2014 through the genocide of the Islamic State on the Yazidis.

The persecution of Yazidis by Kurds describes the atrocities and massacres of the Yazidis committed by Kurds. Sometimes, during these massacres, the Kurds tried to force the Yazidis to convert to Islam. Almost the whole Yazidi population were nearly wiped out by massacres carried out by Kurds.