In early 1501, shortly after the opening of hostilities between the Portuguese admiral Pedro Alvares Cabral and the Zamorin of Calicut, the Kōlattiri Raja of Cannanore invited the Portuguese to trade in the spice markets of Cannanore instead. Treaties were signed and a crown factory, defended by a small palisade, was established in 1502. In late 1505, D. Francisco de Almeida, the first Portuguese vice-roy of the Indies, secured permission to erect the stone fortress of Santo Angelo in Cannanore. The fortress garrison of 150 men was placed under the command of D. Lourenço de Brito [4]

The old Kolathiri Raja who had energetically pursued the Portuguese alliance died sometime in 1506. As the succession was disputed, the Zamorin of Calicut, as formal suzerain of the Kerala coast, nominated an arbitrator to sort through the candidates. The new Kolathiri Raja of Cannanore was consequently indebted to the Zamorin and less inclined to the Portuguese. [5]

Hostilities were in large part due to the Portuguese sinking an Indian ship and killing the crew by stitching them into sails and throwing them into the sea, on the grounds that they were not carrying one of the Cartaz , the passes the Portuguese were imposing on all ships of the region. [6] Such passes had to be signed by either the commander of Cochin or Cannanore. [7] The population of the adjoining state of Kōlattunād was greatly angered by this event, and asked their ruler, the Kōlattiri, to attack the Portuguese. [7]

The firepower of the garrison under Lourenço de Brito allowed it to repulse massive attacks involving thousands of men. [7] The siege soon entered a stalemate, with the Malabari trenches being protected from Portuguese cannon fire by walls of cotton bales, and the Portuguese being slowly forced into starvation. [7] Castanheda's detailed report of the siege states that they were then surprised – and saved – by a tidal wave of lobsters that washed ashore on 15 August. [9] A major assault before the Onam festival nearly overcame the defenders, but was eventually repulsed. However, a large part of the garrison was wounded in the attempt. [7]

The Portuguese garrison was on the verge of being overwhelmed, when on 27 August a fleet of 11 ships under Tristão da Cunha, the 8th Armada, coming from Socotra, appeared. The fleet landed 300 Portuguese soldiers, forcing the lifting of the siege and relieving the fortress. [7] [8] 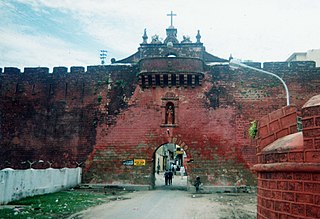 The Battle of Diu was a naval battle fought on 3 February 1509 in the Arabian Sea, in the port of Diu, India, between the Portuguese Empire and a joint fleet of the Sultan of Gujarat, the Mamlûk Burji Sultanate of Egypt, and the Zamorin of Calicut with support of the Republic of Venice.

Dom Francisco de Almeida, also known as "the Great Dom Francisco", was a Portuguese nobleman, soldier and explorer. He distinguished himself as a counsellor to King John II of Portugal and later in the wars against the Moors and in the conquest of Granada in 1492. In 1505 he was appointed as the first governor and viceroy of the Portuguese State of India. Almeida is credited with establishing Portuguese hegemony in the Indian Ocean, with his victory at the naval Battle of Diu in 1509. Before Almeida could return to Portugal, he lost his life in a conflict with indigenous people at the Cape of Good Hope in 1510. His only son Lourenço de Almeida was previously killed in the Battle of Chaul. 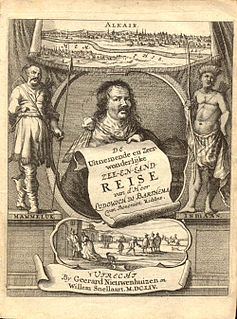 Ludovico di Varthema, also known as Barthema and Vertomannus, was an Italian traveller, diarist and aristocrat known for being one of the first non-Muslim Europeans to enter Mecca as a pilgrim. Nearly everything that is known about his life comes from his own account of his travels, Itinerario de Ludouico de Varthema Bolognese, published in Rome in 1510. 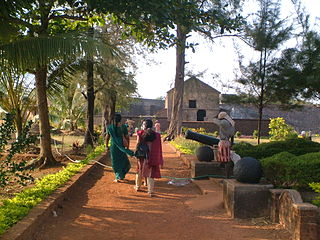 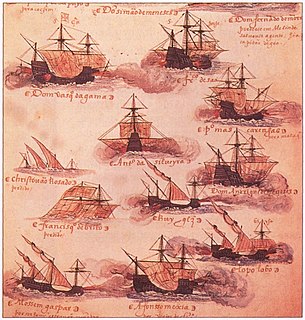 The Battle of Chaul was a naval battle between the Portuguese and an Egyptian Mamluk fleet in 1508 in the harbour of Chaul in India. The battle ended in a Mamluk victory. It followed the Siege of Cannanore in which a Portuguese garrison successfully resisted an attack by Southern Indian rulers. This was the first Portuguese defeat at sea in the Indian Ocean.

The Battle of Cannanore took place in 1506 off the harbour of Cannanore in India, between the Indian fleet of the Zamorin of Calicut and a Portuguese fleet under Lourenço de Almeida, son of the Viceroy Almeida.

Mayimama Marakkar was an Indian ambassador of the Zamorin ruler of Calicut. In 1504, he went on an embassy to the Mamluk ruler in order to obtain an intervention against the Portuguese who were preying on India.

The Second Portuguese India Armada was assembled in 1500 on the order of King Manuel I of Portugal and placed under the command of Pedro Álvares Cabral. Cabral's armada famously discovered Brazil for the Portuguese crown along the way. By and large, the Second Armada's diplomatic mission to India failed, and provoked the opening of hostilities between the Kingdom of Portugal and the feudal city-state of Calicut. Nonetheless, it managed to establish a factory in the nearby Kingdom of Cochin, the first Portuguese factory in Asia.

The Third Portuguese India Armada was assembled in 1501 upon the order of King Manuel I of Portugal and placed under the command of João da Nova. It was small compared to other armadas of the same type and was formed for commercial purposes. Nonetheless, it engaged in the first significant Portuguese naval battle in the Indian Ocean. The Third Armada discovered the uninhabited islands of Ascension and Saint Helena in the South Atlantic Ocean. Some speculate that it was the first Portuguese armada to reach Ceylon.

The 4th Portuguese India Armada was assembled in 1502 on the order of King Manuel I of Portugal and placed under the command of D. Vasco da Gama. It was Gama's second trip to India. The fourth of some thirteen Portuguese India Armadas, it was designed as a punitive expedition, targeting Calicut, to avenge the travails of the 2nd Armada and the massacre of the Portuguese factory in 1500.

The Fifth India Armada was assembled in 1503 on the order of King Manuel I of Portugal and placed under the command of Afonso de Albuquerque. It was Albuquerque's first trip to India. It was not a particularly successful armada - navigational mistakes scattered the fleet on the outward journey. Ships spent much time looking for each other and several ended up travelling alone.

The Sixth India Armada was assembled in 1504 on the order of King Manuel I of Portugal and placed under the command of Lopo Soares de Albergaria.

The Battle of Cochin, sometimes referred as the Second Siege of Cochin, was a series of confrontations, between March and July 1504, fought on land and sea, principally between the Portuguese garrison at Cochin, allied to the Trimumpara Raja, and the armies of the Zamorin of Calicut and vassal Malabari states.

The Seventh India Armada was assembled in 1505 on the order of King Manuel I of Portugal and placed under the command of D. Francisco de Almeida, the first Portuguese Viceroy of the Indies. The 7th Armada set out to secure the dominance of the Portuguese navy over the Indian Ocean by establishing a series of coastal fortresses at critical points – Sofala, Kilwa, Anjediva, Cannanore – and reducing cities perceived to be local threats.

The 1505 expedition of Pêro de Anaia to Sofala led to the establishment of Fort São Caetano, the first permanent Portuguese colony in East Africa. The Capitaincy of Sofala would eventually evolve into the colonial government of Portuguese Mozambique.

Pêro de Ataíde or Pedro d'Ataíde, nicknamed O Inferno (Hell), was a Portuguese sea captain in the Indian Ocean active in the early 1500s. He was briefly captain of the first permanent Portuguese fleet in the Indian Ocean, taking over from Vicente Sodré, and the author of a famous letter giving an account of its fate.

The Mysorean invasion of Kerala was the military invasion of northern Malabar, including the territories of the Zamorin of Calicut, by the Muslim de facto ruler of the Kingdom of Mysore Hyder Ali. After completing the occupation, Kingdom of Cochin, situated south of Malabar, was made a tributary state of Mysore. The major reason for the occupation of Malabar was the desire to have access to Indian Ocean ports. The Mysore invasion provided the English East India Company more chances to tighten their grip on the ancient feudal principalities of Malabar and converting Travancore, over whom Mysore Sultans attacked after Cochin, to a mere protected ally

Dutch Malabar, also known by the name of its main settlement Cochin, was the title of a commandment of the Dutch East India Company on the Malabar Coast between 1661 and 1795, and is part of what is today collectively referred to as Dutch India. Dutch presence in the region started with the capture of Portuguese Quilon, and ended with the occupation of Malabar by the British in 1795. They possessed military outposts in 11 locations: Alleppey, Ayacotta, Chendamangalam, Pappinivattom, Ponnani, Pallipuram, Cranganore, Chetwai, Cannanore, Cochin, and Quilon.