Last updated June 24, 2022
For other battles of the same name, see Siege of Odawara.

The third Siege of Odawara (小田原征伐, Odawara seibatsu) occurred in 1590, and was the primary action in Toyotomi Hideyoshi's campaign to eliminate the Hōjō clan as a threat to his power. The months leading up to it saw hasty but major improvements in the defense of the castle, as Hideyoshi's intentions became clear. Thus, despite the overwhelming force brought to bear by Hideyoshi, the siege saw little actual fighting.

The massive army of Toyotomi Hideyoshi surrounded the castle in what has been called "the most unconventional siege lines in samurai history." The samurai were entertained by everything from concubines, prostitutes, and musicians to acrobats, fire-eaters, and jugglers. The defenders slept on the ramparts with their arquebuses and armor; despite their smaller numbers, they discouraged Hideyoshi from attacking. So, for the most part, this siege consisted of traditional starvation tactics. Only a few small skirmishes erupted around the castle, as when a group of miners from Kai Province dug under the castle walls, allowing men under Ii Naomasa to enter. [1]

After three months, the sudden appearance of Ishigakiyama Ichiya Castle took away the Hōjō defenders' will to resist and they surrendered. [2]

In addition to taking Odawara Castle, Hideyoshi also defeated the Hōjō at their outposts at Hachiōji Castle, Hachigata castle, and Shizuoka in and near the southwestern part of the Kantō region. Included Shimoda fortress at Ize province, where Hideyoshi's naval forces defeated the Izu suigun. However, at Oshi castle, the defenders surrendered after hearing word that their lord had been defeated at Odawara.

The Chiba clan, allies of the Hōjō in Shimōsa, also saw Sakura Castle fall to Honda Tadakatsu and Sakai Ietsugu of the Tokugawa army during the campaign. Chiba Shigetane, daimyō of the Chiba, surrendered the castle to the besieging forces on the condition that his clan would not be abolished. While the Chiba were consequently divested of all of their holdings, many of their senior members were taken into service by Tokugawa retainer Ii Naomasa, thanks to aid he had received many years earlier from the clan during the occupation of Takeda Katsuyori's Tsutsujigasaki Castle. [3]

Tokugawa Ieyasu, one of Hideyoshi's top generals, was given the Hōjō lands. Though Hideyoshi could not have guessed it at the time, this would turn out to be a great stepping-stone towards Tokugawa's attempts at conquest and the office of shogun.

The tea master Yamanoue Sōji was at the service of the Odawara lords. He was sentenced to death by torture.

In the Sengoku Basara Season 2 anime, Odawara Castle was the setting for the fight between Toyotomi Hideyoshi and Date Masamune. Hideyoshi was killed in the castle at Masamune's hands. Afterward, Ishida Mitsunari went to the castle to grieve his master's demise.

Toyotomi Hideyoshi called Kinoshita Tōkichirō or Hashiba Hideyoshi, was a Japanese samurai and daimyo of the late Sengoku period regarded as the second "Great Unifier" of Japan. His invasion of Korea makes his memory there somewhat less positive. 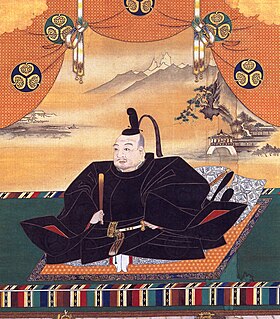 Tokugawa Ieyasu was the founder and first shōgun of the Tokugawa Shogunate of Japan, which ruled Japan from 1603 until the Meiji Restoration in 1868. He was one of the three "Great Unifiers" of Japan, along with his former lord Oda Nobunaga and fellow Oda subordinate Toyotomi Hideyoshi. The son of a minor daimyo, Ieyasu once lived as a hostage under daimyo Imagawa Yoshimoto on behalf of his father. He later succeeded as daimyo after his father's death, serving as vassal and general of Oda clan, he building up his strength under Oda Nobunaga.

The Battle of Sekigahara was a decisive battle on October 21, 1600 in what is now Gifu prefecture, Japan, at the end of the Sengoku period. This battle was fought by the forces of Tokugawa Ieyasu against a coalition of Toyotomi loyalist clans under Ishida Mitsunari, several of which defected before or during the battle, leading to a Tokugawa victory. The Battle of Sekigahara was the largest battle of Japanese feudal history and is often regarded as the most important. Toyotomi's defeat led to the establishment of the Tokugawa shogunate. 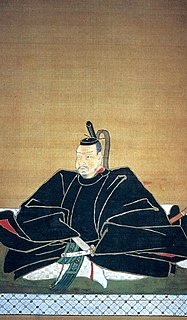 Date Masamune was a regional ruler of Japan's Azuchi–Momoyama period through early Edo period. Heir to a long line of powerful daimyō in the Tōhoku region, he went on to found the modern-day city of Sendai. An outstanding tactician, he was made all the more iconic for his missing eye, as Masamune was often called dokuganryū (独眼竜), or the "One-Eyed Dragon of Ōshu". 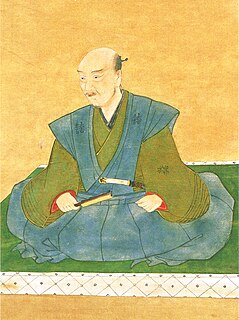 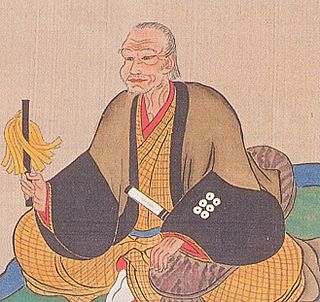 Odawara Castle is a landmark in the city of Odawara in Kanagawa Prefecture, Japan.

Honda Tadakatsu, also called Honda Heihachirō was a Japanese samurai, general and daimyo of the late Sengoku through early Edo periods, who served Tokugawa Ieyasu. Honda Tadakatsu was one of the Tokugawa Four Heavenly Kings along with Ii Naomasa, Sakakibara Yasumasa and Sakai Tadatsugu. 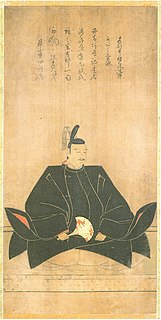 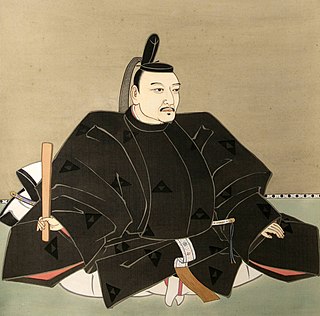 Hōjō Ujimasa was the fourth head of the later Hōjō clan, and daimyō of Odawara. Ujimasa succeeded the territory expansion policy from his father, Hojo Ujiyasu, and achieved the biggest territory in the clan's history.

Hōjō Ujiyasu was a daimyō (warlord) and third head of the Odawara Hōjō clan. Known as the "Lion of Sagami", he was revered as a fearsome warrior and a cunning man. He is famous for his strategies of breaking the siege from Takeda Shingen and Uesugi Kenshin. The son of Hōjō Ujitsuna, his only known wife was Imagawa Yoshimoto's sister, Zuikei-in. Among his sons are Hōjō Ujimasa and Uesugi Kagetora.

The Sekigahara Campaign was a series of battles in Japan fought between the Eastern Army aligned with Tokugawa Ieyasu and the Western Army loyal to Ishida Mitsunari, culminating in the decisive Battle of Sekigahara. The conflict was sparked by a punitive expedition led by Ieyasu against the Uesugi clan in the northeastern Tōhoku region, providing Mitsunari with an opportunity to denounce Ieyasu in the name of the infant ruling taikō Toyotomi Hideyori while the Tokugawa troops were in the field. 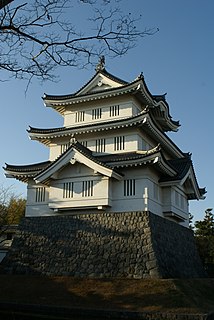 The 1590 Siege of Oshi was one of many battles in Toyotomi Hideyoshi's campaigns against the Hōjō clan during Japan's Sengoku period. 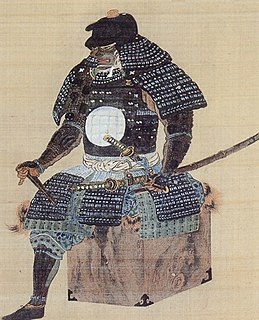 Satake Yoshinobu was a daimyō in Sengoku period and early Edo period Japan under the Tokugawa shogunate and the 19th head of the Satake clan and 1st daimyō of Kubota Domain in Dewa Province. His courtesy title was Sakonoeshōshō, later Ukyō-dayū and Jijū and his Court rank was Junior Fourth Rank, Upper Grade.

Lady Kai (甲斐姫), speculated to have been born in 1572, was a Japanese female warrior, onna-musha from the Sengoku Period. She was the daughter of Narita Ujinaga and granddaughter of Akai Teruko, retainers of the Later Hōjō clan in the Kantō region. She is known as the heroic woman who helped her father's resistance at Oshi Castle against Toyotomi Hideyoshi's army during the siege of Odawara. After the war, she became one of the wives of Hideyoshi. She was known for her bravery and beauty. According to the chronicle of Narita clan, she was praised as "The most beautiful woman in east Japan".（東国無双の美人） 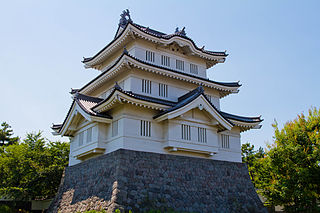 Oshi Castle is a Japanese castle located in Gyōda, Saitama Prefecture, Japan. During the Edo period, Oshi Castle was the center of the 100,000 koku Oshi Domain, but the castle is far better known for its association with the siege of Oshi during the late Sengoku period. The castle was also known as "Kama-jō" or "Oshi-no-uki-jō". It was regarded as one of the seven main strongholds of the Kantō region 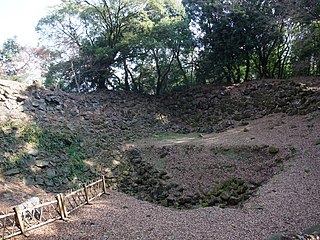 Ishigakiyama Ichiya Castle was a late Sengoku period Japanese castle in Odawara, Kanagawa Prefecture, Japan. It was one of the most famous among the castles built by Toyotomi Hideyoshi, and was the site of his first meeting with Date Masamune. Its ruins were designated a National Historic Site in 1959.

Daidōji Masashige was a Japanese samurai and commander of the Sengoku period. He was one of the most important vassals of the Go-Hōjō clan.

Matsuda Norihide was a Japanese samurai and commander of the Sengoku period. He was one of the most important vassals of the Go-Hōjō clan and the salary he got was the highest among Go-Hōjō clan's vassals.