The district of Sifangtai (Chinese :四方台区; pinyin :Sìfāngtái Qū) is an administrative subdivision of the province of Heilongjiang, China. It is under the jurisdiction of the prefecture-level city of Shuangyashan.

Hansaplatz is a Berlin U-Bahn station located on the U 9 in the Hansaviertel district. It opened on 28 August 1961 with the first section of the new line running south–north from Spichernstraße to Leopoldplatz. The station itself had been erected as early as 1957 in the course of the Interbau housing development. 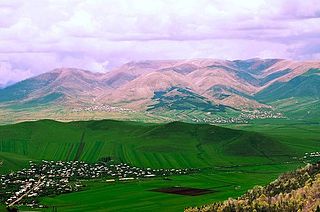 Chambarak, is a town and urban municipal community in the Gegharkunik Province of Armenia. It was known as Mikhaylovka until 1920, Karmir Gyugh between 1920 and 1972, and Krasnosyelsk between 1972 and 1991. Chambarak was founded in 1835-40 as Mikhaylovka on the Getik River by Russian immigrants. Karmir Gyugh and Krasnosyelsk both mean "Red Village" in Armenian and Russian respectively. There are many 13th-century khachkars in the town. The name Chambarak refers to an ancient settlement that existed on the present town's place during the Middle Ages.

Nový Jičín District is a district (okres) within Moravian-Silesian Region of the Czech Republic. Its capital is Nový Jičín.

Adaminowo is a village in the administrative district of Gmina Włocławek, within Włocławek County, Kuyavian-Pomeranian Voivodeship, in north-central Poland. It lies approximately 17 kilometres (11 mi) east of Włocławek and 66 km (41 mi) south-east of Toruń.

The Embassy of Cyprus in Moscow is the chief diplomatic mission of Cyprus in the Russian Federation. It is located at 9 Povarskaya Street in the Arbat district of Moscow

Arrajadzor is a town in the Syunik Province of Armenia.

Mętów is a village in the administrative district of Gmina Głusk, within Lublin County, Lublin Voivodeship, in eastern Poland. It lies approximately 12 km (7 mi) south of the regional capital Lublin.

Gęsówka is a village in the administrative district of Gmina Wróblew, within Sieradz County, Łódź Voivodeship, in central Poland. It lies approximately 7 kilometres (4 mi) south of Wróblew, 13 km (8 mi) south-west of Sieradz, and 66 km (41 mi) south-west of the regional capital Łódź.

The Grand Désert is a 2 km long glacier (2005) situated on the Rosablanche in the Pennine Alps in the canton of Valais in Switzerland. In 1973 it had an area of 1.89 km². The lake feeds Lac du Grand Désert.

Janów is a village in the administrative district of Gmina Kije, within Pińczów County, Świętokrzyskie Voivodeship, in south-central Poland. It lies approximately 5 kilometres (3 mi) south-east of Kije, 7 km (4 mi) north-east of Pińczów, and 35 km (22 mi) south of the regional capital Kielce.

Podborowo is a village in the administrative district of Gmina Pniewy, within Szamotuły County, Greater Poland Voivodeship, in west-central Poland.

Łąck Mały is a settlement in the administrative district of Gmina Świętajno, within Szczytno County, Warmian-Masurian Voivodeship, in northern Poland.

Chlebowo is a village in the administrative district of Gmina Gryfino, within Gryfino County, West Pomeranian Voivodeship, in north-western Poland, close to the German border. It lies approximately 10 kilometres (6 mi) north-east of Gryfino and 12 km (7 mi) south of the regional capital Szczecin.

Všestudy is a village and municipality in Mělník District in the Central Bohemian Region of the Czech Republic.

Messaadine is a town and commune in the Sousse Governorate, Tunisia. As of 2004 it had a population of 8,444.

Hollys Mill is an unincorporated community in Pittsylvania County, in the U.S. state of Virginia.

Chertanovo Tsentralnoye District is an administrative district (raion) of Southern Administrative Okrug, and one of the 125 raions of Moscow, Russia.

Baigelong station is a metro station on Line 5 of the Shenzhen Metro. It opened on 22 June 2011.