Sigatoka (pronounced as Singatoka) is a town in Fiji. It is found on the island of Viti Levu and is situated at the mouth of the Sigatoka River, after which it is named, some 61 kilometres from Nadi. In Fiji's last census (2017) the population of Sigatoka was at 17,622. [1] Sigatoka is the principal urban centre for the province of Nadroga-Navosa.

An ornate temple, open to public and built by Hare Krishna devotees, dominates the Sigatoka skyline. Major tourist attractions include the Sigatoka Sand Dunes near Kulukulu village two kilometres north-west of Sigatoka, and the Kula Eco Park, which houses some 500 birds of 100 species from many tropical countries. The town is also the principal centre for Fiji's coastal tourism belt – the Coral Coast – which hosts many of the country's leading hotels and resorts.

Sigatoka has a long history of settlement dating to 1000 BCE, when indigenous tribal chiefs occupied the area. In the period of contact, European settlers explored Sigatoka when they made it as part of Colonial Fiji.

Today, Sigatoka thrives as a agricultural hub of Fiji, which elected its democratic government in 2001.

Sigatoka was incorporated as a town in 1959, and is governed by a 10-member Sigatoka Town Council, elected for a three-year term. At the last municipal elections, held on 22 October 2005, all 10 seats were won by a coalition of the Soqosoqo Duavata ni Lewenivanua (SDL) and the National Federation Party (NFP). The new council re-elected Ratu Isikeli Tasere as Mayor, a position held for a one-year term, renewable any number of times.

From 1912 to 1923, banana plantations in the Sigatoka Valley suffered severe episodes of a fungal infection known as the Yellow Sigatoka disease. [2] The Black sigatoka, an even more ravaging plant disease, is related.

The Sigatoka Valley is known for its high production of vegetables, and thus referred to as Fiji's "Salad Bowl".

Methodist Primary School is one of the largest primary schools in Sigatoka Town. It has more than one thousand students. There is a ratio of sixty two students per one teacher. Students attend primary school from six years of age. [3]

Sigatoka, essentially part of Nadroga province is home to the champion Nadroga Rugby Union team who have won a number of locally sponsored rugby union competitions (no exact figure) and the Farebrother-Sullivan Trophy eighty-one times. Sigatoka is now commonly dubbed as "Rugby Town" due to the provincial rugby team's influence on the Fiji national rugby scene. The town is also home to the Nadroga Soccer Association. Despite all the past glory, the NSA is currently struggling to keep in the top flight due to a number of reasons. Cited by the current President of NSA are financial reasons and poaching of talent to name a few. They managed to secure sixth position in the latest Fiji Football League. Sigatoka is also the home town of Iliesa Delana, Fiji's and the South Pacific's first gold medalist in the Paralympic Games (2012).

Health care is still primarily state-funded and most people in Sigatoka and Nadroga/Navosa province access public health and medical services which are largely free or with minimal fees. Sigatoka Town has one local hospital (Sigatoka Sub-Divisional Hospital) and there are health centres located in various districts in the province of Nadroga/Navosa. There is a limited number of private medical and dental practitioners located in the centre of the town.

Sigatoka's economy is largely dictated by the flow-on effects of the broader Nadroga/Navosa economy. Nadroga contains a high concentration of Hotels and Resorts outside of Nadi. There are several resorts in Sigatoka, for example, Intercontinental Fiji Golf Resort and Spa (IHG), Shangri-La's Fijian Resort, Outrigger on the Lagoon Fiji, Warwick Fiji Resort & Spa, Hideaway Hotel, Naviti Hotel. Recently, there has also been major growth in international residential developments.

Tourism accounts for a large number of employees and provincial development. Nadroga is also regarded and nicknamed the 'Salad Bowl of Fiji', specifically the Sigatoka Valley, which produces a high volume of the nation's fruits, spices and vegetables, both for local consumption and export. Dalo (or Taro), often the domain of Eastern Fiji, is not so widely produced in Nadroga, however, cassava (tapioca) is produced for consumption and export. The province is one of Fiji's sugar producing areas, however the number of farms and production have declined in the past 10 years as farmers seek to diversify their crops and move to more lucrative crop options.[4] Expiring native land leases have also contributed to a decline in sugar production. Cattle (beef) farming used to be a major economic activity led by the government-supported Yalavou Cattle Scheme, however this has also declined in recent years. Sigatoka's economy has benefited from the flow-on effect of tourism and agriculture in the greater Nadroga/Navosa province. The town provides an essential service point for hotel industry, hotel workers, farmers and so forth, in terms of provision of wholesale/retail goods, government services, police, utilities and administration. Some of the longest running businesses in Sigatoka are; R Billimoria & Sons, Tappoos, Sigatoka Electric Limited, Pratap Foodhall, MAMP Shop2Save Supermarket, Neels Restaurant, Bhavani Jewellers, Sigatoka Motor Spares and Patel's Hardware to name a few. The international headquarters of Pacific Green Industries (Fiji) Limited is located in Sigatoka.

Nadroga Navosa Fijian Provincial Communal is a former electoral division of Fiji, one of 23 communal constituencies reserved for indigenous Fijians. Established by the 1997 Constitution, it came into being in 1999 and was used for the parliamentary elections of 1999, 2001, and 2006.. The electorate was coextensive with Nadroga Navosa Province.

Shangri-La's Fijian Resort is a resort-hotel located at Yanuca Island, on Viti Levu island, Cuvu, Sigatoka, Fiji Islands. It is managed by Shangri-La Hotels and Resorts. It opened in 1979, shortly after the Regent of Fiji in 1975.

Joeli Vidiri is a retired Fijian rugby union footballer who also played for the New Zealand All Blacks. He played as a wing.

The Skipper Cup is the Fiji Rugby Union's national provincial rugby union championship. The competition runs from May to September and is contested between the country's top 12 provincial sides. At the end of the competition the top 4 teams qualify for the semi-finals, with the winners moving on to the final. The competition has been sponsored by the phone company Digicel since 2008. Prior to that the trophy was called the Sanyo Cup.

Lawaqa Park is a rugby union stadium in Sigatoka, Fiji. The stadium has a nominal capacity of 12,000 people. It currently hosts rugby union matches as well as local football matches. It is currently playing host to the 2019 Nadroga 10's Provincial Rugby Union competition.

Isoa Coalala Neivua is a Fijian rugby union player. He plays as a wing or centre.

Apimeleki Nadoki Qiliho is an indigenous Fijian from the Province of Nadroga-Navosa in the Fiji Islands and a retired Anglican bishop.

Kadavu Province is one of fourteen provinces of Fiji, and forms part of the Eastern Division, which also includes the provinces of Lau, Lomaiviti and Rotuma. Kadavu also belongs to the Burebasaga Confederacy, a hierarchy of chiefs from southern and western Fiji with Roko Tui Dreketi of Rewa as the paramount chief.

Lelean Memorial School is one of the largest co-ed schools in Fiji. It was established in 1943 and is run by the Methodist Church of Fiji and Rotuma. It is co-located at the Davuilevu Methodist Compound with the Davuilevu Theological College and the Young People's Department, which runs training for Methodist catechists.

Fiji participated in the 2012 Summer Paralympics in London, United Kingdom, from August 29 to September 9. 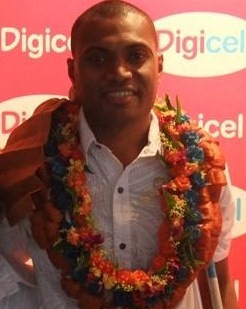 Iliesa Delana is a Fijian politician and Paralympic high jumper who has been Member of the Parliament of Fiji and Cabinet Minister since 17 September 2014. He was the first Fijian athlete to win a medal, gold in high jump, for Fiji at the Paralympics.

Jasa Veremalua is a Fijian rugby union player who plays for the San Diego Legion in Major League Rugby (MLR). He also plays for the Fiji sevens team. Veremalua made his debut for Fiji at the 2013 Wellington Sevens.

Apenisa Neori Kurisaqiia is a Fijian medical officer and politician who served as Speaker of the Representative of Fiji from 1992 to 2000 and Ministry of Health and Social Welfare from 1987 to 1989.