Sigebert Buckley (c. 1520 – probably 1610 [1] ) was a Benedictine monk in England, who is regarded by the Benedictines and by Ampleforth College in particular as representing the continuity of the community through the English Reformation.

Although the English Benedictines had been dissolved by Henry VIII in the 1530s, one solitary monastery was re-established in Westminster Abbey by the Roman Catholic Queen, Mary I of England 20 years later. After only a few years, her half-sister Queen Elizabeth I dissolved this monastery again. By 1607 only one of the Westminster monks was left alive: Father Sigebert Buckley. [2]

Buckley survived until the reign of James I, by which time a number of Englishmen had become Benedictines in the monasteries of Italy and Spain, and had obtained a faculty from Pope Clement VIII (in 1602) to take part with the secular clergy and the Jesuits in the English mission. It was through the efforts of the English monks of the Cassinese or Italian Congregation (including Thomas Preston) that Buckley became instrumental in preserving monastic continuity in England. [3] It is through Buckley that the English Benedictine Congregation lays claim to an unbroken continuity with the pre-Reformation monasticism of England.

Ampleforth College, the largest Roman Catholic boarding school in England, was opened in 1802 and is run by the Benedictine monks of Ampleforth Abbey, which traces its history through Buckley.

I, D. Sebert, otherwise Sigebert, priest and monk of the monastery of St. Peter, Westminster, of the Congregation of England of the Order of St. Benedict: lest the rights, privileges, insignia, should perish which were formerly granted by Princes and Pontiffs and which for some years, God so permitting, have been preserved in me the sole survivor of all the English monks: did at London in the year 1607, the 21st day of November, with the consent of their superiors receive and admit as brethren and monks of the said monastery D. Robert Sadler of Peterborough and D. Edward Maihew of Salisbury, English priests and monks professed of the Cassinese Congregation of St. Justina of Padua: and to them did grant, impart and assign all rights, privileges, ranks, honours, liberties and graces which in times past the monks professed and dwelling in the said monastery did enjoy. And the same by these presents I do again approve, ratify and confirm. And I do receive and admit as monks, brethren, lay-brethren, oblates of the said monastery – and to them do grant, impart and assign all rights, privileges, as above, all those whom D. Thomas Preston of Shropshire, D. Augustine [Smith] and D. Anselm [Beech] Lancastrians, and D. Maurus [Taylor] of Ely have admitted or received as monks, lay-brethren, oblates, and to whom they have granted the rights, &c, as above: since to them I did grant authority and power so to admit, &c, as appeareth more at large in my letters of the 21st November 1607: the which [letters] as to all and each of their parts I do by virtue of these presents hold ratified and confirmed, and will so hold them in perpetuum. Given at Punisholt, otherwise Ponshelt, Anno Domini 1609, the 8th day of November, in the presence of the underwritten Notary and witnesses". [4]

St Benet's Hall is a Permanent Private Hall (PPH) of the University of Oxford. Its principal building is located at the northern end of St Giles' on its western side, close to the junction with Woodstock Road, Oxford. Established in 1897 by Ampleforth Abbey, St Benet's Hall's original historic function was to allow its monks to be able to study for secular degrees at the university. The hall historically has a Benedictine and Roman Catholic ethos. Today, St Benet's Hall hosts an international community consisting of 84 undergraduate students and 48 graduate students of all faiths and none. Unlike other Colleges, St Benet's Hall does not have a High Table, but one Common Table which is shared by all members of the hall. 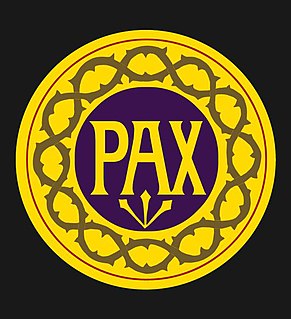 Ampleforth Abbey is a monastery of Benedictine monks a mile to the east of Ampleforth, North Yorkshire, England, part of the English Benedictine Congregation. It claims descent from the pre-Reformation community at Westminster Abbey through the last surviving monk from Westminster, Sigebert Buckley. As of 2020 the monastery has 53 monks.

Edward Mayhew was an English Benedictine.

The Abbot Primate of the Order of St. Benedict serves as the elected representative of the Benedictine Confederation of monasteries in the Catholic Church. While normally possessing no authority over individual autonomous monasteries or congregations, he does serve as a liaison to the Vatican on behalf of the Benedictines, promotes unity among Benedictine monasteries and congregations, and represents Benedictines at religious gatherings throughout the world. He resides in Rome, Italy, at Sant'Anselmo all'Aventino which serves, because he is Abbot Primate, as the "Primatial Abbey of Sant'Anselmo." He appoints a Rector to oversee the College of Sant'Anselmo, serves as the "Grand Chancellor" of the Pontificio Ateneo Sant'Anselmo, and appoints a Rector to oversee the Church of Sant'Anselmo.

The American-Cassinese Congregation is a Catholic association of Benedictine monasteries founded in 1855. The monasteries of the congregation follow the monastic way of life as outlined by St. Benedict of Nursia in his early 6th century Rule of Saint Benedict. The congregation is one of 19 congregations in the Benedictine Confederation and includes 25 monasteries: 19 autonomous abbeys and 6 dependent priories, located across 15 states and Puerto Rico, as well as Brazil, Canada, Colombia, Mexico, and Taiwan.

St Augustine's Abbey or Chilworth Abbey, formerly Chilworth Friary, is a Roman Catholic Benedictine abbey in Chilworth, Surrey. The building, which is Grade II listed, was designed by Frederick Walters and was built in 1892. It was formerly a Franciscan friary and a novitiate for the order. The abbey church is open to the public 365 days a year. 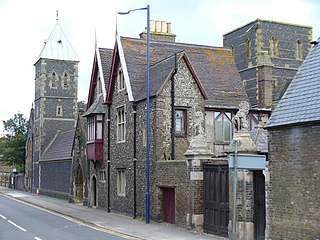 St Augustine's Abbey or Ramsgate Abbey is a former Benedictine abbey in Ramsgate. It was built in 1860 by Augustus Pugin and is a Grade II listed building. It was the first Benedictine monastery to be built in England since the Reformation. In 2010, the monks moved to St Augustine's Abbey in Chilworth, Surrey. The site is now owned by the Vincentian Congregation from Kerala, India. The church of St Augustine, across the road from the abbey site, belongs to the Archdiocese of Southwark and is a shrine of St Augustine of Canterbury. 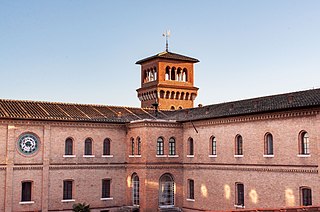 The College of Sant'Anselmo is an international Benedictine college founded by Pope Leo XIII in 1887 and located in Rome, Italy. Situated on the Aventine Hill, it is one of four Benedictine institutions that occupy the complex known as "Sant'Anselmo all'Aventino" which serves as the Primatial Abbey of the Benedictine Confederation. As an ecclesiastical residential college in the Roman College tradition, it serves as both a house of formation for Benedictines, but also as a residence for over one hundred monks from around forty countries, religious, diocesan priests, and lay people. It offers a monastic environment for those who study at the onsite Pontifical Athenaeum of Saint Anselm or at other Roman pontifical universities.