Sigurd Snake-in-the-eye (Old Norse : Sigurðr ormr í auga) was a semi-legendary Viking warrior and Danish king active from the mid to late 9th century. According to multiple Saga sources and Scandinavian histories from the 12th century and later, he is one of the sons of the legendary Viking Ragnar Lodbrok and Áslaug. [1] His historical prototype might have been the Danish King Sigfred who ruled briefly in the 870s. [2]

"Snake-in-the-eye" as part of Sigurd's name denoted a physical characteristic. He was born with a mark in his eye, described as the image of the Ouroboros (a snake biting its own tail).

According to Ragnar Lodbrok's saga, while Sigurd was just a boy, his half-brothers Eric and Agnar were killed by Swedish king Eysteinn Beli (also known as Östen). When Áslaug heard the news of Eric and Agnar's death, even though she wasn't their mother, she cried blood and asked the other sons of Ragnar to avenge their dead brothers. Because the Swedish king controlled Uppsala and a holy cow named Sibilja, Ivar the Boneless believed gods were on Eysteinn's side and feared the magic that ruled there. However, when his younger brother, the three-year-old Sigurd Snake-in-the-Eye, wanted to attack Eysteinn, the brothers changed their minds. Sigurd's foster-father assembled five longships for him. Hvitserk and Björn Ironside mustered 14, and Aslaug and Ivar the Boneless marshaled 10 ships each, and together they took vengeance upon Eysteinn. [3]

The Danish historian Saxo Grammaticus relates that Sigurd, as a young man, was close to his father and sojourned for a time in Scotland and the Scottish Islands. After Ragnar's Viking army had slain the local earls, Sigurd and his brother Radbard were appointed sub-rulers of these territories. Later in life Sigurd and his brothers accompanied Ragnar on a hazardous expedition through Rus' to the Hellespont. [4]

The death of Ragnar Lothbrok and the Great Heathen Army

Most of the legendary sources say that King Ælla of Northumbria killed Ragnar Lothbrok, in about 865, by having him thrown into a pit of snakes. According to traditional accounts, Ragnar is reputed to have exclaimed as he was dying: "How the young pigs would grunt if they knew what the old boar suffers!" Sigurd and his siblings were reportedly informed of their father's fate by an envoy from Ælla. As he heard the news, Sigurd was supposedly so affected that he cut himself to the bone with a knife he held in his hand; his brother Björn Ironside supposedly gripped a spear so tightly that the imprint of his fingers was left in the wood. [5] Sigurd and his brothers swore they would avenge Ragnar's death.

In 865-866, the Viking leaders Ivar the Boneless and Ubbe crossed the North Sea with a stor hær ("Great Army"). Traditional accounts claim that all the surviving sons of Ragnar apart from Ivar launched a first attack on Ælla's kingdom, which failed. Sigurd's brother, Ivar the Boneless, devised a strategy in which the Great Heathen Army occupied and sacked York, to provoke Ælla into engaging on the Vikings' terms. Under Ivar's plan, the Vikings feigned retreat, leading Ælla to underestimate them and become encircled. According to Ragnarssona þáttr (The Tale of Ragnar's Sons, part of the Sagas of Ragnar Lothbrok), Ælla was captured alive and executed afterwards by blood eagle. [6] [7] [8]

Ragnarssona þáttr states that when his father died, Sigurd inherited Zealand, Scania, Halland, the Danish islands, and Viken. It is also possible he was for a time co-ruler of Denmark with his brother Halfdan, because Frankish sources mention certain Sigfred and Halfdan as rulers in 873 - the names Sigurd and Sigfred were often mixed up in Nordic literature. [9] He could have succeeded his brother Halfdan Ragnarsson as the sole king of Denmark in about 877, when Halfdan fell in battle in the Irish Sea. A Danish Viking king called Sigfred, who appears to have become landless by this time, was killed in West Francia in 887; he is quite possibly the same person. [10] Sigurd married Blaeja, the daughter of king Ælla of Northumbria and they had two children, Harthacanute and Áslaug Sigurðardóttir, who was married to Helge of the Dagling lineage. [11]

Helge may have briefly succeeded his purported father-in-law as king of Denmark before being overthrown by Olof, a Viking chief who swept down from Sweden in about the year 900. [12]

The Ragnarssona þáttr states that Danish king Harthacanute was a son of Sigurd. However, the 11th century chronicler Adam of Bremen mentions Hardegon (probably Harthacanute) as the son of a certain Sven. Hardegon or Harthacanute succeeded Sigtrygg Gnupasson as the king of part of Denmark (probably Jutland, but according to later tradition Zealand, Scania and Halland) in about 916. According to the Ragnarssona þáttr, he nevertheless lost Viken (Oslofjord) that had been part of the Danish realm in the 9th century. [13] He was the father of Gorm the Old, the king of Denmark. Gorm succeeded his father as king and married Thyra.

Gorm's son, Harald Bluetooth succeeded his father as king and married possibly three times with Gunhild, Tove and Gyrid. Harald had a son named Sweyn Forkbeard. Sweyn succeeded his father as king and married Gunhild (Świętosława of Poland). They had a son named Cnut the Great. Sweyn also ruled England in his lifetime and established the Danish Empire. When Sweyn died, his elder son Harald Svendsen became the king of Denmark, while England's former king, Ethelred, reclaimed the throne. Following Harald's death, his brother Cnut the Great became king, re-established the Danish North Sea Empire. He married Emma of Normandy with whom he had a son named Harthacnut. When Cnut died (and after the brothers of Harthacnut also had died), Harthacnut became king of Denmark and England. Upon his death, Edward the Confessor became ruler of England in 1042. [14] Sweyn Forkbeard also had a daughter, Estrid, from whom all ruling kings and queens of Denmark after 1047 descend.

Sigurd's daughter Áslaug, as mentioned above, married Helgi the Sharp of the Dagling dynasty. They had a son named Sigurd Hart, who married a woman named Ingeborg. Sigurd Hart and Ingeborg had children named Guttorm Sigurdsson and Ragnhild Sigurdsdotter. When Sigurd Hart's uncle, king Fróði of Ringerike died, Sigurd Hart supposedly went to Norway to succeed him as king of Ringerike. [15] 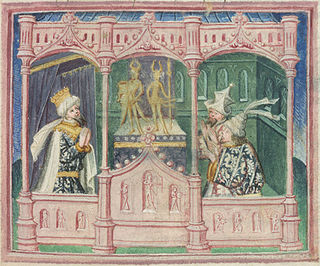 Sigurd Ring was a legendary king of the Swedes mentioned in many old Scandinavian sagas. According to these sources he was granted rulership over Uppland as a vassal king under his uncle Harald Wartooth. Later he would take up arms against his uncle Harald in a bid to overthrow him and take the crown of Denmark, a conflict which Sigurd eventually won after the legendary Battle of the Brávellir, where it is said that Odin himself intervened and killed Harald. In the Sagas Sigurd is also known for being the father of the Norse Viking hero and legendary king of Denmark and Sweden, Ragnar Lodbrok. According to Bósa saga ok Herrauds, there was once a saga on Sigurd Ring, but this saga is now lost. 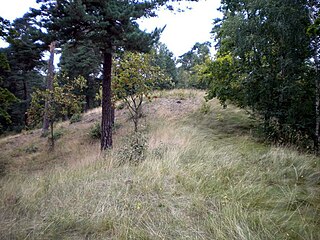 Björn Ironside was a Norse Viking chief and legendary king of Sweden. According to the 12th- and 13th-century Scandinavian histories, he was the son of the notorious and historically dubious Viking king Ragnar Lodbrok. He lived in the 9th century, being securely dated between 855 and 858. Björn Ironside is said to have been the first ruler of the Swedish Munsö dynasty. In the early 18th century, a barrow on the island of Munsö was claimed by antiquarians to be Björn Järnsidas hög or Björn Ironside's barrow.

Ivar the Boneless, also known as Ivar Ragnarsson, was a Viking leader who invaded Anglo-Saxon England. According to Tale of Ragnar Lodbrok, he was the youngest son of Ragnar Loðbrok and his wife Aslaug. His brothers included Björn Ironside, Halfdan Ragnarsson, Hvitserk, Sigurd Snake-in-the-Eye and Ubba.

Halfdan Ragnarsson was a Viking leader and a commander of the Great Heathen Army which invaded the Anglo-Saxon kingdoms of England, starting in 865. 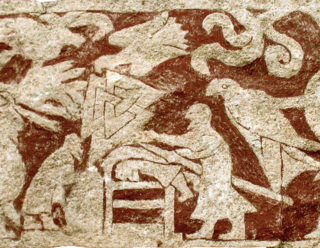 The blood eagle is a ritual method of execution, detailed in late skaldic poetry. According to the two instances mentioned in the Sagas, the victims were placed in a prone position, their ribs severed from the spine with a sharp tool, and their lungs pulled through the opening to create a pair of "wings". There is continuing debate about whether the rite was a literary invention, a mistranslation of the original texts, or an authentic historic practice. 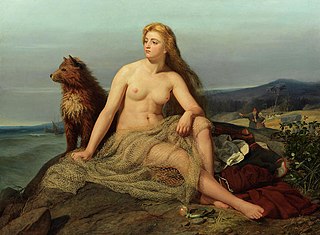 Aslaug, also called Aslög, Kráka or Kraba, is a figure in Norse mythology who appears in Snorri's Edda, the Völsunga saga and in the saga of Ragnar Lodbrok as one of his wives.

Ælla was King of Northumbria, a kingdom in medieval England, during the middle of the 9th century. Sources on Northumbrian history in this period are limited, and so Ælla's ancestry is not known and the dating of the beginning of his reign is questionable.

Harthacnut or Cnut I was a semi-legendary King of Denmark. The old norse story Ragnarssona þáttr makes Harthacnut son of the semi-mythic viking chieftain Sigurd Snake-in-the-Eye, himself one of the sons of the legendary Ragnar Lodbrok. The saga in turn makes Harthacnut the father of the historical king, Gorm. It has been suggested he is to be identified with the Hardegon of Northmannia whose early-10th century conquest of Denmark was related by Adam of Bremen.

Osberht was king of Northumbria in the middle of the 9th century. Sources on Northumbrian history in this period are limited. Osberht's descent is not known and the dating of his reign is problematic. 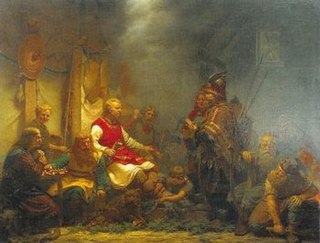 TheTale of Ragnar's sons is an Old Norse story about Ragnar Lodbrok and his sons.

Sigurd Hart or Sigurd Hjort was a legendary king of Ringerike, during the late 9th or early 10th centuries. he is mentioned in Ragnarssona þáttr and in Halvdan Svartes saga.

The name Ragnhild Sigurdsdotter may refer to two different figures from Old Norse literature, an amalgam of them, or a purely fictitious figure.

The Tale of a Ragnar Lodbrok is an Icelandic legendary saga of the 13th century about the Viking ruler Ragnar Lodbrok. It is part of the manuscript of the Völsunga saga, which it immediately follows. The tale covers the origin of Aslaug, Ragnar's quest for the hand of Þóra Borgarhjǫrtr, his later marriage to Aslaug, the deeds of their sons in battle, and Ragnar's death at the hands of king Ælla of Northumbria.

Sigfred and Halfdan were two brothers who figured as Kings of the Danes in 873. Little is known about them; they are the last Danish rulers recorded by contemporary sources before the 930s.

Helge was a Danish king who ruled at the end of the 9th century. There is no contemporary evidence for his existence, since he is only mentioned in a source from the 11th century.