Silius Titus (1623–1704), of Bushey, was an English politician, Captain of Deal Castle, and Groom of the Bedchamber to King Charles II. Colonel Titus was an organiser in the attempted escape of King Charles I from Carisbrooke Castle. [1]

Bushey is a town in the Hertsmere borough of Hertfordshire in the East of England. It has a population of 24,000. Bushey Heath is a large neighbourhood south east of Bushey on the boundary with the London Borough of Harrow reaching elevations of 165 metres (541 ft) above sea level.

He was born in London, the son of Silas Titus, a salter and Constatia (Constance) Colley. He was educated at Christ Church, Oxford, where he matriculated in 1638, and the Middle Temple.

Titus began his political aspirations by writing a pamphlet titled Killing No Murder in 1657 during The Protectorate period of the English Interregnum era of English history. The pamphlet advocated the assassination of Oliver Cromwell. Due to the danger involved in writing such a politically charged opinion against the Protector, Killing No Murder was published under the pseudonym 'William Allen'. 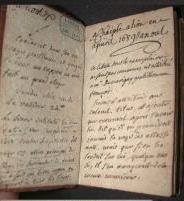 Killing No Murder is a pamphlet published in 1657 during The Protectorate period of the English Interregnum era of English history. The pamphlet of disputed authorship advocates the assassination of Oliver Cromwell. The publication was in high demand at the time of its distribution. Cromwell was said to have been so disturbed after the publication of Killing No Murder that he never spent more than two nights in the same place and always took extreme precaution in planning his travel.

An interregnum is a period of discontinuity or "gap" in a government, organization, or social order. Archetypally, it was the period of time between the reign of one monarch and the next, and the concepts of interregnum and regency therefore overlap. Historically, the longer and heavier interregna were typically accompanied by widespread unrest, civil and succession wars between warlords, and power vacuums filled by foreign invasions or the emergence of a new power. A failed state is usually in interregnum.

Cromwell was said to have been so disturbed after the publication of Killing No Murder that he never spent more than two nights in the same place and always took extreme precaution in planning his travel.

Titus's authorship of this pamphlet has been disputed in some circles; it has also been attributed to Edward Sexby, [2] or a man by the real name of William Allen. These attributions are usually unfounded as King Charles II awarded Titus the title of Groom of the Bedchamber for his service in authoring the work.

Colonel Edward Sexby or Saxby was an English Puritan soldier and Leveller in the army of Oliver Cromwell. Later he turned against Cromwell and plotted his assassination.

Silius Titus first took up arms for the Parliament. Although he was a strong Presbyterian Titus became an ardent Royalist devoted to Charles I and King Charles II. [3]

The term Cavalier was first used by Roundheads as a term of abuse for the wealthier Royalist supporters of King Charles I and his son Charles II of England during the English Civil War, the Interregnum, and the Restoration. It was later adopted by the Royalists themselves. Although it referred originally to political and social attitudes and behaviour, of which clothing was a very small part, it has subsequently become strongly identified with the fashionable clothing of the court at the time. Prince Rupert, commander of much of Charles I's cavalry, is often considered to be an archetypal Cavalier.

Ludgershall was a parliamentary borough in Wiltshire, which elected two Members of Parliament (MPs) to the House of Commons from 1295 until 1832, when the borough was abolished by the Great Reform Act.

Lostwithiel was a rotten borough in Cornwall which returned two Members of Parliament to the House of Commons in the English and later British Parliament from 1304 to 1832, when it was abolished by the Great Reform Act.

Though not eloquent, he would often illustrate his speeches with a humor that rendered them effective. For instance, when it was complained that Titus made sport of the House of Commons of the United Kingdom, he retorted that "things were not necessarily serious because they were dull". Once again, when Charles II offered to impose limitations on a Roman Catholic Church sovereign rather than exclude his brother from the throne, Titus likened such a plan to "having a lion in the lobby and then voting to secure ourselves by letting him in and chaining him, rather than by keeping him out".

When he died in 1704, Titus was buried at Bushey. [5] He had married c. 1645 Katherine, daughter of James Winstanley, Counsellor-at-law, of Gray's Inn and Braunstone, Leicestershire.

Captain Titus was mentioned in the diary kept by Samuel Pepys on two occasions. The following excerpts come from the entries of those days.

"Very great deal of company come today, among others Mr. Bellasses, Sir Thomas Lenthropp, Sir Henry Chichley, Colonel Philip Honiwood, and Captain Titus, the last of whom my Lord showed all our cabins, and I suppose he is to take notice what room there will be for the King's entertainment." [6]

"This day with great joy Captain Titus told us the particulars of the French's expedition against Gigery upon the Barbary Coast, in the Straights, with 6,000 chosen men. They have taken the Fort of Gigery, wherein were five men and three guns, which makes the whole story of the King of France's policy and power to be laughed at." [7]

Roger Palmer, 1st Earl of Castlemaine, PC (1634–1705) was an English courtier, diplomat, and briefly a member of parliament, sitting in the House of Commons for part of 1660. He was also a noted Roman Catholic writer. His wife Barbara Villiers was one of Charles II's mistresses. 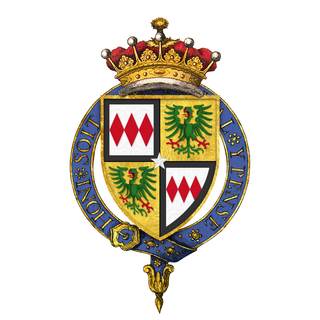 Edward Montagu, 1st Earl of Sandwich, KG, FRS was an English landowner and Infantry officer who later became a naval officer and a politician who sat in the House of Commons at various times between 1645 and 1660. He served Oliver Cromwell loyally in the 1650s, but went on to play a considerable part in the Restoration of Charles II, and was rewarded with several Court offices. He served as the English Ambassador to Portugal 1661-1662, and Ambassador to Spain 1666-1668. He became an Admiral, serving in the two Anglo-Dutch Wars in the reign of Charles II, and was killed at the Battle of Solebay. Our best picture of him is contained in the diary of Samuel Pepys, who was his cousin and protégé.

Sir Samuel Tuke, 1st Baronet was an English officer in the Royalist army during the English Civil War and a notable playwright. He is best known for his 1663 play The Adventure of Five Hours, possibly co-authored by George Digby – the play was produced by the Duke's Company and later proved an influence on Richard Brinsley Sheridan's opera The Duenna.

Sir Edward Atkyns was an English lawyer and politician who sat in the House of Commons in 1660. He was the Chief Baron of the Exchequer from 1686 to 1689.

Roger Pepys was an English lawyer and politician who sat in the House of Commons from 1661 to 1678. He is chiefly remembered as Samuel Pepys's "Cousin Roger": he and his children appear regularly in the great Diary. Relations between the two men were always good.

Edward Phelips was an English landowner and politician who sat in the House of Commons at various times between 1640 and 1679. He fought for the Royalist cause in the English Civil War.

John Bence was an English merchant and politician who sat in the House of Commons at various times between 1659 and 1688.

Robert Phelips was a Royalist officer during the English Civil War. After the Restoration he was a Member of Parliament, and from 25 May 1687 until 21 March 1689 Chancellor of the Duchy of Lancaster.

Sir Philip Howard was an English soldier and politician who sat in the House of Commons between 1659 and 1679.

Henry Dunster was an English merchant and politician who sat in the House of Commons from 1660 to 1679.

Michael Malet was an English lawyer and politician who sat in the House of Commons from 1660 to 1679. He was a zealous Protestant and opponent of the court and appears to have lost his reason.

Sir William Tyringham (1618–1685) was an English politician who sat in the House of Commons from 1660 to 1679. He fought in the Royalist army in the English Civil War.

Sir John Shaw, 1st Baronet was an English merchant and politician who sat in the House of Commons from 1661 to 1679.

Thomas King was an English merchant and politician who sat in the House of Commons at various times between 1659 and 1679.