Silvana Tenreyro FBA (born 6 September 1973 [1] ) is a British-Argentine economist who is Professor of Economics at the London School of Economics and External Member of the Bank of England's Monetary Policy Committee since July 2017. She currently serves as the president of the European Economic Association for 2021. [2]

She was appointed to a three-year term on the Bank of England Monetary Policy Committee from July 2017, [3] and was reappointed for a second term from July 2020. [4] She has been a professor of economics at the London School of Economics. She worked at the US Federal Reserve Bank of Boston from 2002 to 2004 and at the Bank of Mauritius from 2012 to 2014. [5]

Tenreyro was elected Fellow of the British Academy (FBA) in July 2018. [6] In 2021 she was named a Fellow of the Econometric Society. [7] She has British, Italian and Argentine citizenships.

Sir Stephen John Nickell, is a British economist and former Warden of Nuffield College, Oxford, noted for his work in labour economics with Richard Layard and Richard Jackman. Nickell and Layard hypothesised the tendency for reduced unemployment to lead to inflation resulted from its effect on competitive bargaining in the labour market He is currently a member of the Office for Budget Responsibility's Budget Responsibility Committee.

Charles Albert Eric Goodhart, is a British economist. He was a member of the Bank of England's Monetary Policy Committee from June 1997 to May 2000 and a professor at the London School of Economics. He is the developer of Goodhart's law, an economic law named after him. He is the son of Arthur Lehman Goodhart, and the brother of William Goodhart and Sir Philip Goodhart. 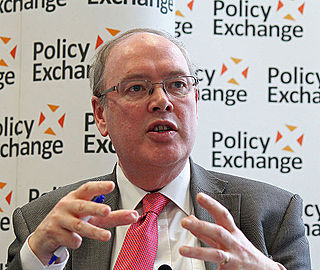 Andrew Sentance, CBE is a British business economist. He is currently Senior Adviser to Cambridge Econometrics. From November 2011 until October 2018, he was Senior Economic Adviser to PwC. He was an external member of the Monetary Policy Committee of the Bank of England from October 2006 to May 2011.

Nemat Talaat Shafik, Baroness Shafik,, known as Minouche Shafik, is an Egyptian-born British-American economist who has been serving as the Director of the London School of Economics since September 2017.

Cheryl Schonhardt-Bailey, FBA is an American-British professor of political science, and head of the Department of Government at the London School of Economics and Political Science.

Lucrezia Reichlin is an Italian economist who has been a professor at London Business School since 2008.

Emily Meg Jackson, is a British legal scholar who specialises in medical law. She has been a professor of Law at the London School of Economics since 2007 and Head of its Law Department since 2012. She has previously researched or lectured at the Faculty of Law, University of Oxford, at St Catharine's College, Cambridge, at Birkbeck College, University of London, and at Queen Mary, University of London. 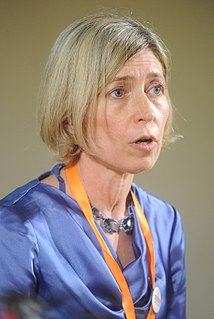 Christopher John Emile Bliss, FBA is a British economist who was the Nuffield Professor of International Economics at the University of Oxford between 1992 and 2007.