Sylvester I was the bishop of Rome from 31 January 314 until his death. He filled the see of Rome at an important era in the history of the Western Church, yet very little is known of him. The accounts of his pontificate preserved in the seventh- or eighth-century Liber Pontificalis contain little more than a record of the gifts said to have been conferred on the church by Constantine I, although it does say that he was the son of a Roman named Rufinus. His feast is celebrated as Saint Sylvester's Day in Western Christianity on 31 December, while Eastern Christianity commemorates it on 2 January. 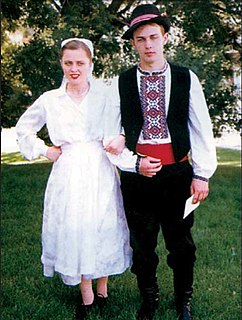 Rusyns in Pannonia, or simply Rusyns, or Ruthenians, are a regional minority subgroup of the Rusyns, an Eastern Slavic people. They are located in the Central European region of Pannonia, which today covers almost all of Hungary, the southernmost parts of Slovakia, northeast Croatia, a tiny sliver portion of northeast Slovenia, and the northernmost part of Serbia (Vojvodina).

Sylvester Levay is a Serbian-born Hungarian recording artist and composer.

Aleksandar Ćirić is a Serbian water polo player who played for two Olympic bronze medal squads, one for FR Yugoslavia at the 2000 Olympics in Sydney, the other for Serbia at the 2008 Olympics in Beijing, and one Olympic silver medal squad for Serbia and Montenegro at the 2004 Olympics in Athens. His most notable achievements during his club career are: winning the Euroleague with VK Bečej in 2000, when he gained the title of MVP of competition; and four LEN Cups, three with Brescia and one with VK Radnički Kragujevac.

Michael "Mike" Joseph Sylvester is an Italian-American retired basketball player who is currently coach at Cincinnati Hills Christian Academy. Due to the United States boycotting the 1980 Summer Olympics, he was the only American to win a medal at those games, using a dual citizenship to play for Italy.

Rudolf Belin is a Croatian former football manager and player.

Sylvester Wackerle was a West German bobsledder who competed in the mid-1950s. He won two medals in the four-man event at the FIBT World Championships with a silver in 1954 and a bronze in 1953.

Dobrosav Krstić was a Yugoslav and Serbian football manager and player.

The following squads were named for the 1924 Summer Olympics tournament.

József Takács was a Hungarian international footballer who earned 32 international caps between 1923 and 1933, scoring 26 goals, and participated at the 1924 Summer Olympics. Takács, who played as a striker, played club football for Vasas SC and Ferencváros.

Aleksa Šaponjić, is a Serbian water polo player, and a member of the Serbia men's national water polo team. His first notable competition with his national team was the 2012 European Championship in Eindhoven, the outcome was a win. He currently attends the University of California, Berkeley and plays for the CA Golden Bears water polo team.

Tamás Takács is a Hungarian football striker who plays for Mezőkövesdi SE.

Adrienne Iven Mihamle is a Cameroonian football striker currently playing for in the Serbian First League for Spartak Subotica. As a member of the Cameroonian national team she played the 2012 Summer Olympics.

Aleksandra Crvendakić is a Serbian professional women's basketball player who plays for LDLC ASVEL Féminin of the French Ligue 1 and EuroLeague Women. She also represents the Serbian national basketball team.

Sylvester Wackerle is a German ice hockey player. He competed in the men's tournament at the 1964 Winter Olympics.