Simon van der Stel (14 October 1639 – 24 June 1712) was the last commander and first Governor of the Dutch Cape Colony, the settlement at the Cape of Good Hope.

Simon was the son of Adriaan van der Stel, an official of the Dutch East India Company (VOC). Adriaan was appointed the first Dutch governor of Mauritius in 1639. Simon was born at sea while his father was en route to Mauritius to take up his new posting. Adriaan had a long tenure in Mauritius, and Simon spent seven years there. [1]

His mother was Maria Lievens, daughter of a freed Indian slave woman known as Monica of the Coast of Goa, or Monica da Costa.[ citation needed ] [2] Adriaan's governorship ended after five years, and after a few more years, Adriaan left Mauritius for Dutch Ceylon. Adriaan was murdered in Ceylon and Maria also died. Simon went on to Batavia, capital of the Dutch East Indies, where he remained until he was 20 years old.

He then went to the United Provinces, where he associated with the most important members of the VOC, such as Willem Six. In 1663 he married Willem's daughter, Johanna Jacoba Six (1645–1700). They had six children. [3] In 1679, he was appointed "Commander" of the VOC's colony at the Cape of Good Hope, through the growing influence of his relative, Joan Huydecoper van Maarsseveen. [4] Simon was involved in making wine in Muiderberg; when he left the country he handed the vineyards over to Hendrik van Rheede. [5]

Van der Stel and his wife, Johanna Jacoba Six, did not enjoy a very good relationship and her sister Cornelia accompanied her husband to the Cape. Van der Stel never saw his wife again, though he remained devoted to her and frequently sent her money. Johanna Jacoba remained in Holland, and sent the furnishings and works of art required to fit out the governor's Residence at Groot Constantia. These included several art works including The Fisherman, an unfinished painting by Simon de Vlieger, which was one of 13 of his works purchased by Jan Cappelle upon his death. The painting came up for sale at the auction of Van der Stel's estate in 1716, where it was purchased by the Simon de Vlieger. [1]

In 1685 he was visited by Hendrik van Rheede with whom he shared in great interest in tropical botany. To prevent competition anywhere else in the world, young cinnamon-, cloves and camphor trees were destroyed by the ambitious son of Rijckloff van Goens. [6] In 1685-86, he took part in an expedition to the Copper Mountains, Namaqua where he made topographic & geographic, botanical and zoological observations. [7] In 1691, the VOC replaced the office of "Commander" with "Governor", and Van der Stel was promoted to the new position. His house Groot Constantia was well furnished with fine paintings including the unfinished painting by Simon de Vlieger "The Fisherman".

Every one of his four sons was at one time or another with him in South Africa. Willem Adriaan, after being magistrate of Amsterdam, succeeded his father as Governor of the Cape; Frans "de jonker" became a farmer at the Cape; Adrian became governor of Amboina (1706–1720); Cornelis was one of the 352 shipwrecked in the Ridderschap van Holland in 1694. [8] An expedition under Willem de Vlamingh was sent out to look for survivors on islands in the Indian Ocean or on the coast of Western Australia.

Van der Stel retired in 1699, and was succeeded by his son Willem Adriaan van der Stel. [9] In retirement, Simon devoted himself to his estate at Constantia, where he died in 1712. François Valentijn visited Frans at Constantia in March 1714. [10] The estate was split up and sold 1716; the auction took four days and was very well attended.

The town of Stellenbosch (founded in 1679) was named after him and Simon's Town is also named after him, as well as the Simonsberg mountain. An early ship of the South African Navy, SAS Simon van der Stel was also named for him, in 1952.

Jean-Jacques Rousseau, in his Discourse on Inequality , refers to Governor Van der Stel by name in a story about a Hottentot raised by the Dutch who chooses to "return to his equals" rather than remain in civilised society. According to Rousseau, Van der Stel himself raised the "Hottentot" from birth "in the principles of the Christian religion and in the practices of European customs". The frontispiece of the Discourse features Van der Stel and the "Hottentot" above the phrase, Il retourne chez ses Egaux.

Widely known for his development of the South African wine industry, Van der Stel was also the first Cape Governor to be of mixed race-origin, a fact that was largely unacknowledged by the Apartheid government. [11]

The following lists events that happened during the 1730s in South Africa.

The following lists events that happened during the 1680s in South Africa.

The following lists events that happened during the 1690s in South Africa.

Somerset West is a town in the Western Cape, South Africa. Organisationally and administratively it is included in the City of Cape Town metropolitan municipality as a suburb of the Helderberg region . The vehicle registration code for Somerset West is CFM and the post code is 7130 for street addresses, and 7129 for post office boxes. 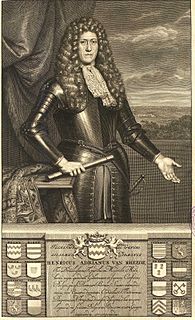 Hendrik Adriaan van Rheede tot Drakenstein was a military man and a colonial administrator of the Dutch East India Company and naturalist. Between 1669 and 1676 he served as a governor of Dutch Malabar and employed twenty-five people on his book Hortus Malabaricus, describing 740 plants in the region. As Lord of Mydrecht, he also played a role in the governance of the Cape colonies. Many plants such as the vine Entada rheedii are named for him. The standard author abbreviation Rheede is used to indicate this person as the author when citing a botanical name.

Adam Tas was a community leader in the Cape Colony at the turn of the 17th century, and is best known for his role in the conflict between Cape Governor Willem Adriaan van der Stel and the Free Burghers at the Cape of Good Hope.

Willem Adriaan van der Stel was an Extraordinary Councillor of the Dutch East Indies, and Governor of the Cape Colony, a way station for the Dutch East India Company (VOC), from 23 January 1699 to 1707. He was dismissed after a revolt and was exiled to the Netherlands.

The Drakenstein ("Dragonstone") Mountains are part of the Cape Fold Belt and are in the Western Cape province of South Africa; they were named in honour of Hendrik Adriaan van Rheede tot Drakenstein who visited the Cape as Commissioner-General in 1685; Drakenstein was the name of his estate in the Netherlands. They actually comprise two separate ranges, the Klein Drakenstein and Groot Drakenstein Mountains. The former located just to the east of Paarl being punctuated by the Huguenot Tunnel on the N1 highway and Du Toitskloof Pass as the R101 route. The latter is much taller and is located south of Franschhoek and Stellenbosch, with Victoria Peak as its highest point. It is traversed by no mountain passes, but contains the Hottentots-Holland Nature Reserve and also holds title of the wettest place in South Africa in the upper reaches of the Jonkershoek Valley, with over 2,000 millimetres (79 in) of precipitation per annum.

Rijcklof Volckertsz. van Goens was the Governor of Zeylan and Governor-General of the Dutch East Indies. He was the Governor of Zeylan from 12 May 1660 to 1661, then in 1663 and finally from 19 November 1664 to 1675 during the Dutch period in Ceylon. He was also served as Council Member of India during 1679. Van Goens’ managed to monopolize the cinnamon trade, get hold of the Malabar pepper and drive away the Portuguese from Ceylon and the Coromandel Coast for the VOC.

Ryk Tulbagh was Governor of the Dutch Cape Colony from 27 February 1751 to 11 August 1771 under the Dutch East India Company (VOC). 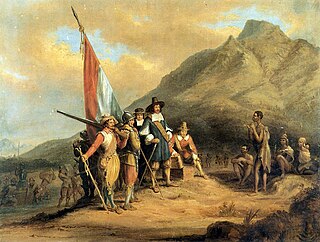 The early history of the South African wine industry can be traced to the founding of a supply station at the Cape of Good Hope by the Dutch East India Company. Jan van Riebeeck was given the task of managing the station and planting vineyards to produce wine and grapes in the Wijnberg ; that could be used to ward off scurvy for sailors continuing on their voyages along the spice route. In 1685, another Cape Governor, Simon van der Stel, purchased a large 750-hectare (1,900-acre) estate, founding what later became the world-renowned Constantia wine estate. In the 19th century, South Africa fell under British rule which proved lucrative for the wine industry as South African wine flowed into the British market. This prosperity lasted until the 1860s when the Cobden–Chevalier Treaty signed by the Palmerston government and France reduced the preferential tariffs that benefited South African wine in favor of French wine exports.

Mauritius was an official settlement of the Dutch East India Company on the island of Mauritius between 1638 and 1710, and used as a refreshing station for passing ships. It was already frequented by Dutch ships from 1598 onwards, but only settled in 1638, to prevent the French and the British from settling on the island.

Isaac de l'Ostal de Saint-Martin was a French chevalier, who came in an unknown year from the Béarn to the Dutch Republic.

Hendrik Claudius aka Heinrich Claudius was a German painter and apothecary or physician, noted for his 17th-century watercolours of South African plants and animals.

Van der Stel is a Dutch surname. Notable people with the surname include: 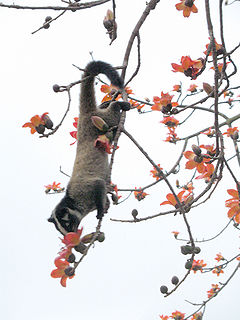 Johan Bax van Herenthals, also written as Joan Bax, and van Herentals, was born in 's-Hertogenbosch and was the governor of the Dutch Cape Colony from 1676 succeeding the acting interim governor IJsbrand Godske. Agriculture developed during his term and he is recognized as contributing to the development of Botany and Ethnobiology. He declared two wars with the Khoikhoi. He died in Cape Town.

Coetsenburg is an historic wine estate and one of the oldest estates in South Africa, established in 1682. It is located at the foot of the Stellenbosch Mountain, which forms part of the estate, in the town of Stellenbosch, 31 miles (50 km) east of Cape Town, in the Cape Winelands of the Western Cape Province. The estate has historically been owned by the Coetsee family and is currently not open to the public. The north-western portion of the original estate is now the Coetsenburg Sports Grounds which belongs to the University of Stellenbosch.

Dirk Coetzee/Coetsee was the Hoofdheemraad (Chancellor) of the District of Stellenbosch and Drakenstein in South Africa for most of the 1690s and early 1700s. He also served as captain of the Stellenbosch Infantry and deacon of the Stellenbosch Moederkerk at different points in time. As captain of the Stellenbosch Infantry, which comprised mostly Huguenots, he provided military backing for a rebellion which began in 1706 against the Governor of the Cape Colony, Willem Adriaan van der Stel, whom the vrijburghers had accused of tyranny, corruption and racketeering. Coetsee was imprisoned in the dungeon of the Castle of Good Hope along with the other leaders of the Huguenots but he was released after a year. The rebellion ultimately succeeded in 1707 when the Dutch East India Company recalled the Governor and other colonial officials. An account of the rebellion is vividly described in the "Diary of Adam Tas".

Hendrik Crudop was a VOC official who also acted as commander at the Cape of Good Hope after the death of Commander Johan Bax van Herenthals in 1678 until the arrival of Simon van der Stel.