It was renamed to its current name from the Yalu (Amnok) River Bridge in 1990. The bridge was constructed by the Imperial Japanese Army (IJA) between April 1937 and May 1943 during its occupation of Korea and its puppet state of Manchukuo (now northeast China). Further downstream, construction work on the New Yalu River Bridge began in October 2010.

Approximately 100 m (110 yd) downstream of this bridge are the remains of an older bridge, now known as the Yalu River Broken Bridge, which was opened to traffic between China and Korea in October 1911. This was later supplemented with the more-modern bridge which became operational in 1943. Both bridges were attacked and bombed by American military aircraft throughout most of the Korean War. From November 1950 to February 1951, the United States Air Force (USAF) used B-29 heavy bombers and F-80 fighter-bombers to repeatedly attack and destroy the bridges in an attempt to cut off the flow of Chinese military and troop supplies to the badly-weakened North Korean armed forces as well as their own forces fighting alongside them there. Despite the serious difficulties present, the bridges were repeatedly repaired (largely by China). The older bridge from 1911 was left in ruins following its destruction at the hands of the USAF (with North Korea allegedly claiming it would serve as a piece of hard evidence of the US military's destruction of the bridge) and only the newer bridge from 1943 was repaired once again and put back into use at the end of the war in 1953.

The Sino-Korean Friendship Bridge and the Broken Bridge are flanked on the Chinese side by parks and promenades which make up the Yalu (Amnok) River Scenic Area. This is a major tourist attraction in China and is rated AAAA on China's national tourist scale. Tourist boats leave from the side of the bridge, allowing visitors to view both bridges and the Dandong riverfront, and pass close to the North Korean waterfront. 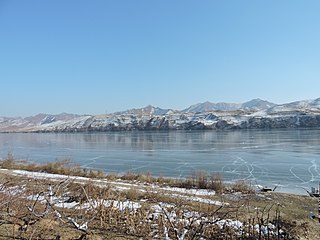 The Yalu River, also called the Amrok River or Amnok River, is a river on the border between North Korea and China. Together with the Tumen River to its east, and a small portion of Paektu Mountain, the Yalu forms the border between North Korea and China and is notable as a site involved in military conflicts such as the First Sino-Japanese War, the Russo-Japanese War, World War II, and the Korean War. 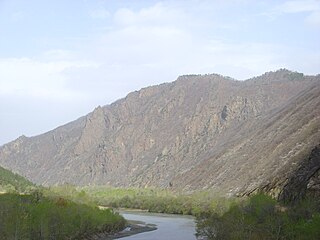 The Tumen River, also known as the Tuman River or Duman River, is a 521-kilometre (324 mi) long river that serves as part of the boundary between China, North Korea and Russia, rising on the slopes of Mount Paektu and flowing into the Sea of Japan. The river has a drainage basin of 33,800 km2. 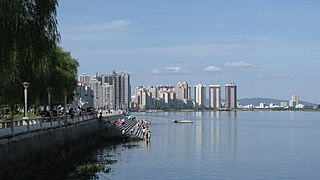 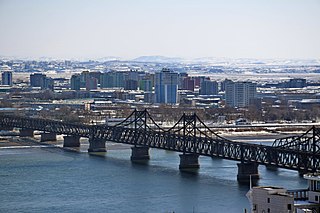 Sinŭiju ; Sinŭiju-si, known before 1925 in English as Yeng Byen City) is a city in North Korea which faces Dandong, China across the international border of the Amnok River. It is the capital of North P'yŏngan province. Part of the city is included in the Sinŭiju Special Administrative Region, which was established in 2002 to experiment with introducing a market economy. In recent years, the city, despite lagging behind the development in the capital Pyongyang, has seen a small construction boom and increasing tourism from China.

Jiandao or Chientao, known in Korean as Gando or Kando, is a historical border region along the north bank of the Tumen River in Jilin province, Northeast China that has a high population of ethnic Koreans. 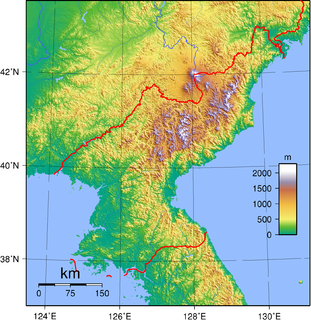 Korea is located on the Korean Peninsula in Northeast Asia. To the northwest, the Amnok River separates Korea from China and to the northeast, the Duman River separates Korea from China and Russia. The Yellow Sea is to the west, the East China Sea and Korea Strait is to the south, and the Sea of Japan is to the east. Notable islands include Jeju Island (Jejudo), Ulleung Island (Ulleungdo), and Liancourt Rocks.

Sinuiju Chongnyon station, also known as Sinŭiju Ch'ŏngnyŏn station, is a railway station in Yŏkchŏn-dong, Sinŭiju-si, North P'yŏngan Province, North Korea. It is the northern terminus of the P'yŏngŭi Line of the Korean State Railway, and the starting point of the Kang'an Line, which is an industrial line serving the factories of Sinŭiju. 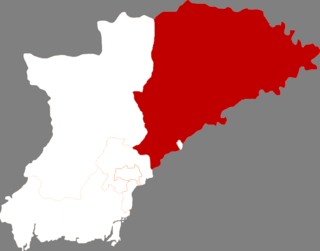 Kuandian Manchu Autonomous County, is a county of eastern Liaoning province, China, bordering North Korea to the southeast and Jilin in the northeast. It is under the administration of Dandong City, the centre of which lies 75 kilometres (47 mi) to the southwest, and is served by China National Highway 201. In Kuandian is the Hushan Great Wall, the most easterly section of the Great Wall of China. A short reconstruction of the wall is open to tourists. The area has an abandoned airstrip that was used by the Chinese airforce during the Korean War. 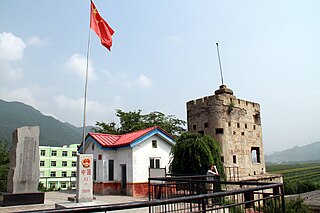 The Ji'an Yalu River Border Railway Bridge is a single-track railway bridge that spans the Yalu River and connects the outskirts of the Chinese town of Ji'an in Jilin Province with the North Korean town of Manp'o in Chagang Province.

The New Yalu (Amnok) River Bridge or Korea-China Amnokgang Bridge, is a road bridge across the Amnok River between Dandong, Liaoning Province, China, and Sinuiju, North Korea. The cable-stayed bridge, which is 3 kilometers (1.9 mi) long including the supporting roads, is intended as a replacement for the Sino–Korean Friendship Bridge. Construction began in October 2011 and is mostly complete and connected with Xingdan Road, but the project stalled between 2014 and 2019. In April 2020, it was reported that the project would be completed in July. On the Chinese side, it is connected to roads, but a barrier gate next to a booth prevents access onto the bridge.

Eastern Liaoning University (ELU) also referred as Liaodong University(Chinese: 辽东学院; pinyin: Liáodōng Xuéyuàn) is a post-secondary institution in Zhen'an District, Dandong, Liaoning Province, China. It is located on the Yalu River, and it has a total of 17,000 students. It was established in April 2003 as a merger of Liaoning Finance College and Dandong Technology College. 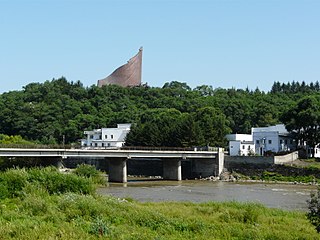 The Changbai–Hyesan International Bridge is a bridge over the Yalu River, connecting Changbai Korean Autonomous County of Changbai City, Jilin Province, China, with Hyesan City of Ryanggang Province, North Korea. It was initially built in 1936 by the Japanese, and, after several destructions and rebuildings, was renewed in 1985 as the present-day bridge, which is 148 meters long and 9 meters wide. Since 1992, one-day, five-day and ten-day tours have been conducted between China and North Korea. 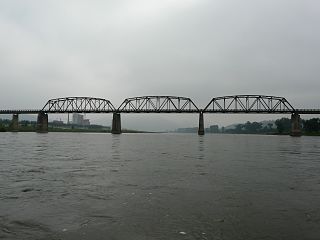 The Tumen Border Bridge is a bridge over the Tumen River, connecting Tumen City, Jilin Province, China, with Onsong County (Namyang), North Hamgyong Province, North Korea. It was built in 1941 by the Japanese and is 515 metres long, 6 metres high, 6 metres wide. Tumen Border Post is located there. A little upstream from the bridge is Tumen Border Railway Bridge.

The Tumen River Bridge is a bridge over the Tumen River, connecting Hunchun City, Jilin Province, China, with Undok County, North Hamgyong Province, North Korea. It was built in 1938 by the Japanese Empire and is 535.2 metres (1,756 ft) long and 6.6 metres (22 ft) wide. It is located at Quanhedao where the Quan River meets the Tumen River. 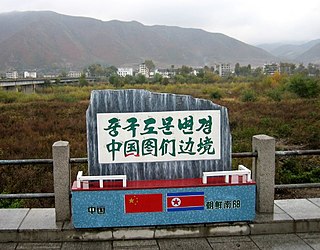 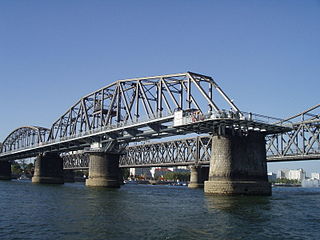 The Yalu River Broken Bridge is a truncated railway swing bridge converted to a viewing platform and historical site. Constructed in 1911 by the Empire of Japan, it was the first bridge built across the Yalu River and connected the Chinese city of Dandong with the Korean city of Sinuiju, linking Japanese-ruled Korea to the Eurasian rail network. The bridge originally consisted of twelve truss spans supported by stone foundations in the riverbed. During the Korean War, the eight spans over the Korean side of the river were badly damaged by American bombing, and were subsequently dismantled. The bridge was not rebuilt. Instead, the remaining four spans over the Chinese side of the river were converted to a walkway, a viewing platform, and a historical site.