Sinpyong County has a trolleybus line in Mannyol-rodongjagu. [1] The only trolleybus visible appeared first on satellite imagery in 2015 and has not moved since. 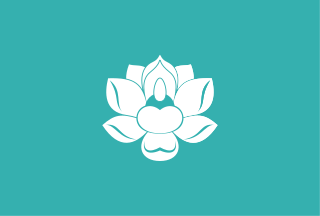 Sangwŏn County is a county of North Hwanghae, formerly one of the four suburban counties located in east P'yŏngyang, North Korea. Prior to 1952, Sangwŏn was merely a township of Chunghwa County. In 1952 it was separated as a separate county, and in 1963 it was added as a county of Pyongyang. It is north of North Hwanghae's Hwangju, Yŏntan, and Suan counties, south of the Nam River and Kangdong county west of Yŏnsan county, and east of Chunghwa county. In 2010, it was administratively reassigned from P'yŏngyang to North Hwanghae; foreign media attributed the change as an attempt to relieve shortages in P'yŏngyang's food distribution system. 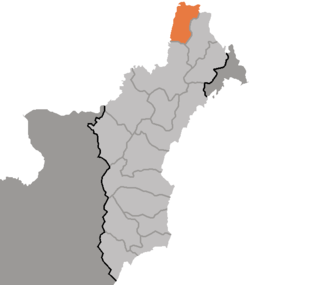 Chasŏng County is a county (kun) in Chagang Province, North Korea. The city is immediately south of the Chinese-North Korean border. Its approximate population to 7 km from the city center is 8,317. The average altitude is 1279 feet, or 389 meters. Nearby cities and towns include Haengjangp'yong and Umnae-dong. 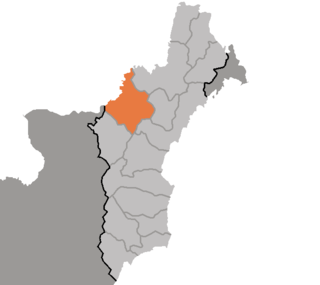 Chŏngp'yŏng County is a county in South Hamgyŏng province, North Korea. It borders South P'yŏngan province to the south, and the East Korea Bay to the east.

Kapsan County is a kun, or county, in Ryanggang Province, North Korea. During the Chosŏn Dynasty, officials who had fallen into disfavour were often sent into internal exile there. 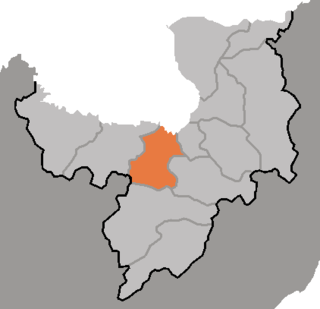 Songgan County is a kun, or county, in central Chagang province, North Korea. It borders Rangrim to the east, Wiwon to the west, Kanggye to the north and Chonchon and Ryongrim to the south. It was formed in 1952 from parts of Chonchon and Changgang, as part of a general reorganization of local government. 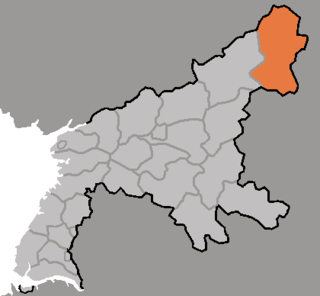 The Sang-O (Shark) class submarines are in use by North Korea, and are the country's second largest indigenously-built submarines. A single unit was captured by the Republic of Korea Navy after it ran aground on 18 September 1996 in the 1996 Gangneung submarine infiltration incident.

Sinp'yŏng station is a railway halt in Sinp'yŏng-ri, greater Tanch'ŏn city, South Hamgyŏng province, North Korea, on the Kŭmgol Line of the Korean State Railway. It was opened on 4 December 1943 along with the rest of the Tongam–Paekkŭmsan section of the line.

Ryongdam station is a railway station in Ryongdam-rodongjagu, Ch'ŏnnae county, Kangwŏn province, North Korea, on the Kangwŏn Line of the Korean State Railway; it is also the starting point of the Ch'ŏnnae Line to Ch'ŏnnae.