He was one of the Williams baronets. He succeeded Sir Trevor Williams, 1st Baronet [1] and was succeeded by Sir Hopton Williams, 3rd Baronet. [1] 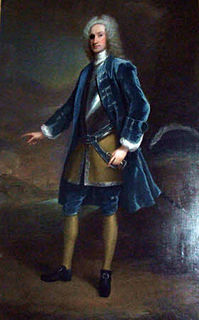 Earl of Galloway is a title in the Peerage of Scotland. It was created in 1623 for Alexander Stewart, 1st Lord Garlies, with remainder to his heirs male bearing the name and arms of Stewart. He had already been created Lord Garlies in the Peerage of Scotland in 1607, with remainder to the heirs male of his body succeeding to the estates of Garlies. This branch of the Stewart family were distant relatives of the Stewart King of Scotland. 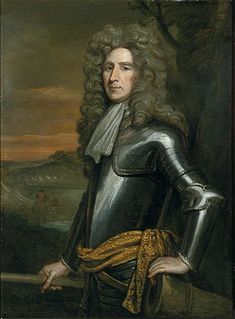 Viscount Bulkeley, of Cashel in the County of Tipperary, was a title in the Peerage of Ireland. It was created on 19 January 1644 for Thomas Bulkeley, the son of Sir Richard Bulkeley of Beaumaris and a supporter of King Charles I of England. The title descended from father to son until the death of his great-great-grandson, the 5th Viscount, in 1738. The late Viscount was childless and was succeeded by his younger brother, the 6th Viscount. The latter was succeeded by his son, the 7th Viscount. The 7th Viscount was also created Baron Bulkeley, of Beaumaris, in the County of Anglesey, in the Peerage of Great Britain on 14 May 1784, which entitled him to a seat in the House of Lords. In 1802 he assumed by Royal licence the additional surname of Warren, which was that of his father-in-law, Sir George Warren. On his death in 1822 both titles became extinct. Sir Richard Williams, of Penrhyn, succeeded to the Bulkeley estates and assumed by Royal licence the additional surname of Bulkeley.

Sir James Campbell, 2nd Baronet of Ardkinglass, was a British Army officer and Scottish politician who sat in the Parliament of Scotland from 1703 to 1707 and in the British House of Commons from 1707 to 1741.

Sir William Williams, 2nd Baronet was a politician in the United Kingdom Great Britain. He was Member of Parliament (MP) for Denbigh Boroughs.

The Buckworth, later Buckworth-Herne, later Buckworth-Herne-Soame Baronetcy, of Sheen in the County of Surrey, is a title in the Baronetage of England. It was created on 1 April 1697 for John Buckworth, High Sheriff of London in 1704. The second Baronet sat as Member of Parliament for Weobley. The third Baronet was Assistant Gentleman Usher to George II. The fifth Baronet was Gentleman-Pensioner and Exon of the Guard during the reign of George III. He married Anne, daughter of Paston Herne, of Haveringland Hall, Norfolk, and assumed by Royal licence the additional surname of Herne. The sixth Baronet assumed in 1806 by Royal licence the additional surname of Soame in compliance with the will of Sir Peter Soame, 4th Baronet, of Thurlow. The ninth Baronet was a member of the Shropshire County Council. As of 2014, the title is held by the thirteenth baronet, who succeeded his father in 2013.

Sir John Trevelyan, 2nd Baronet of Nettlecombe, Somerset was a British politician who sat in the English and British House of Commons between 1695 and 1722.

Sir Thomas Butler, 3rd Baronet of Cloughgrenan, was an Irish baronet and politician.

Earl Tylney, of Castlemaine in the County of Kerry, was a title in the Peerage of Ireland. It was created on 11 June 1731 for Richard Child, 1st Viscount Castlemaine. The Child family descended from the merchant, economist and colonial administrator Josiah Child, who on 16 July 1678 was created a baronet, of Wanstead in the County of Essex, in the Baronetage of England. The first Baronet was succeeded by his son from his second marriage, Sir Josiah Child, 2nd Baronet.

Gervase Eyre was an English MP for Nottinghamshire.