Sirilo Lovokuro (spelt also as Sirilo Lovokuru) (born Taveuni, circa 1965-26 August 2014) was a Fijian rugby union player. He played as a centre and as fly-half. He was also one of Fiji's first players to turn professional in Japan.

His first international match was against Wales, at Suva, on May 31, 1986. He was also part of the 1987 Rugby World Cup roster, where he played only the match against New Zealand. After retiring from his player career, he became headteacher of the Ratu Nemani Memorial School. [2] He also played for Japan along with Fijian representative Paulo Nawalu in the 1991 Hong Kong Sevens. [3]

On August 26, 2014, Lovokuro died from heart attack while preparing his Ratu Nemani Memorial school rugby team in Momi but he had left a mark on parents and landowners in the area.

Ratu Seru Rabeni was a Fijian rugby union player. He played as a centre or wing. 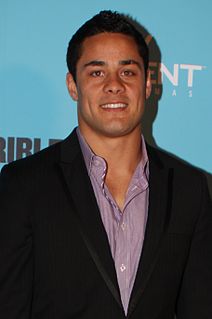 Jarryd Lee Hayne is an Australian former professional rugby league footballer who last played for the Parramatta Eels in the National Rugby League. He has also played American football and rugby union sevens at the highest levels. An Australia and Fiji international and New South Wales State of Origin representative fullback or centre, he previously played for the Gold Coast Titans and the NRL All Stars team. He won the Dally M Medal in 2009 and 2014 as the NRL's player of the year, and the Rugby League International Federation's International Player of the Year award in 2009. Hayne attracted significant attention when he made the switch from one of the NRL's top players to a rookie in the 2015 NFL season with the San Francisco 49ers. At the end of the season, Hayne ended his NFL career. Before returning to the NRL, Hayne also represented Fiji in rugby union sevens. 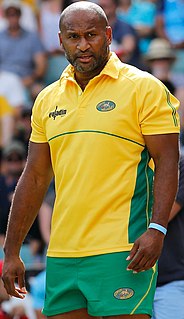 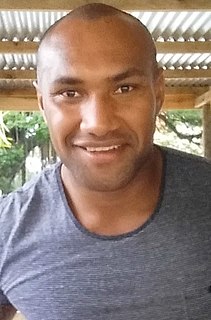 Tevita Kuridrani is an Australian rugby union player of Fijian descent. His usual position is outside-centre. He plays for the Brumbies in Super Rugby and represents Australia in international rugby. 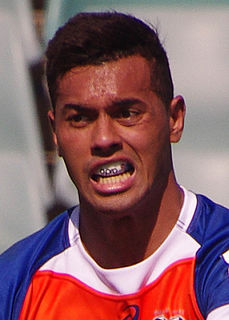 Ben Volavola is an Australian-born Fijian international rugby union footballer who plays for French Top 14 team Racing 92. He has previously played for Super Rugby clubs such as the Waratahs, Crusaders, and most recently the Rebels. Volavola can play as either a fly-half or full back. 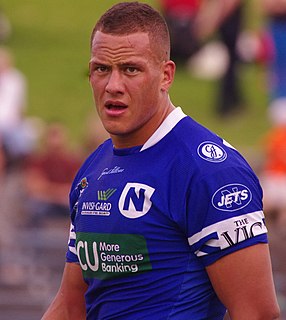 Kane Evans is a Fiji international rugby league footballer who plays as a prop for the Parramatta Eels in the NRL.

Kirisi 'Chris' Kuridrani, formerly Kirisi Nasiganiyavi, is an Australian rugby union player of Fijian descent. He is currently signed to Japanese club Honda Heat and previously played for the Queensland Reds in Super Rugby. His usual position is wing. 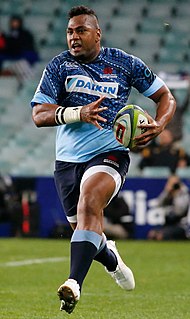 Taqele Naiyaravoro is an Australian professional rugby union and rugby league footballer. His regular playing position is the wing.

Ian Malcolm Williams is an Australian former rugby union player who played as wing. He played for both Australia and Japan. He is nicknamed Peabody.

Pouvalu Latukefu is a Tongan former rugby union player. He played as lock.