Last updated September 09, 2022
Biblical army commander
Not to be confused with Sisara (disambiguation).

Sisera (Hebrew : סִיסְרָאSîsərā) was commander of the Canaanite army of King Jabin of Hazor, who is mentioned in Judges 4–5 of the Hebrew Bible. After being defeated by the forces of the Israelite tribes of Zebulun and Naphtali under the command of Barak and Deborah, Sisera was killed by Jael, who hammered a tent peg into his temple.

According to the biblical book of Judges, Jabin, King of Hazor, oppressed the Israelites for twenty years. His general was Sisera, who commanded nine hundred iron chariots from Harosheth Haggoyim, a fortified cavalry base. [1] After the prophetess Deborah persuaded Barak to face Sisera in battle, they, with an Israelite force of ten thousand, defeated him at the Battle of Mount Tabor on the plain of Esdraelon. Judges 5:20 says that "the stars in their courses fought against Sisera", and the following verse implies that the army was swept away by the Wadi Kishon. [2] Following the battle, there was peace for forty years. [3]

After the battle, Sisera fled on foot until he came to campsite of Heber the Kenite in the plain of Zaanaim, where he was received by Jael, Heber's wife. Jael brought him into her tent with apparent hospitality and gave him milk. Jael promised to hide Sisera and covered him with a rug; but after he fell asleep, she drove a tent peg through his temple with a mallet, her blow being so forceful that the peg pinned his head to the ground. [4]

Later, during his farewell address, the prophet Samuel referred to the Israelites' subjection to Sisera as a consequence of their "forgetting the LORD their God". [5]

The etymology of Sisera's name is unclear. [6] Sisera's name has been variously identified as Philistine, Hittite, Hurrian, or Egyptian (Ses-Ra, "servant of Ra"). [7] The Israeli scholar and archaeologist Adam Zertal identifies Sisera with the sea people called Shardana (or Sherden), arguing that Sisera came from the island of Sardinia. [8] Zertal and Oren Cohen proposed that the excavation at El-Ahwat, between Katzir-Harish and Nahal Iron, is the site of Harosheth Haggoyim, Sisera's military base. [8] [9] However, consensus has not been reached regarding the site of Harosheth Haggoyim. Niditch suggests that its association with the term haroset might indicate its placement at any number of wooded places. [6]

The Jewish Encyclopedia reports that possibly his father was Shamgar. [10] According to Jewish legend, because Sisera's mother cried a hundred cries when he did not return home, a hundred blasts are blown on the shofar on Rosh Hashana, the Jewish New Year. [11] The Talmud states that the descendants of Sisera studied Torah in Jerusalem and even taught children there. [12] [13] A direct descendant of Sisera was Rabbi Akiva. [14] [15]

According to the Talmud, Jael engaged in sexual intercourse with Sisera seven times, but because she was attempting to exhaust him in order to kill him, her sin was for Heaven's sake and therefore praiseworthy. [16]

Also according to the Midrash, [17] Sisera had previously conquered every country against which he had fought. His voice was so strong that, when he called loudly, the most solid wall would shake and the wildest animal would fall dead. Deborah was the only one who could withstand his voice and not be stirred from her place. Sisera caught enough fish in his beard when bathing in the Kishon to provision his whole army, and thirty-one kings followed Sisera merely for the opportunity of drinking, or otherwise using, the waters of Israel. [13]

Sisera's murder by Jael was frequently depicted in historical European art. Lucas van Leyden, a Dutch engraver and painter during the Renaissance period, created a woodcut of the scene.

Pietro Alessandro Guglielmi (1728–1804) wrote an oratorio, Debora e Sisera, for the Lenten season of 1788 at the Teatro di San Carlo, Naples, which was said to have been "almost universally regarded as one of the most sublime works of the late 18th century." [18]

German composer Simon Mayr wrote an oratorio (1793) on the story of Sisera for the church of San Lazzaro dei Mendicanti in Venice. [19]

In Geoffrey Household's 1939 spy thriller Rogue Male , the protagonist muses: "Behold, Sisera lay dead and the nail was in his temples."

In a half-hour radio drama, Butter in a Lordly Dish (1948), Agatha Christie has her protagonist drug a lawyer's coffee; after revealing her true identity, she hammers a nail into his head.

In Anthony Trollope's novel The Last Chronicle of Barset , artist Conway Dalrymple paints the heiress Clara Van Siever as Jael driving a nail through the head of Sisera.

The story of Jael and Sisera has been the subject of many paintings, including those by Artemisia Gentileschi, Gregorio Lazzarini, James Northcote, Gustave Doré and James Tissot.

In Shelby Foote's Stars in Their Courses (1994), about the Battle of Gettysburg, the author reflects on the defeat of General Robert E. Lee.

"The Stars in Their Courses" is the title of a chapter about the Battle of Gettysburg in the novel Lone Star Preacher (1941) by John Thomason. The quotation from Judges 5:20 appears at the end of the chapter.

In the Law & Order episode "Pro Se", the schizophrenic James Smith suffers from the delusion that (among other things) he is General Sisera and various women are trying to poison him.

In Waking the Dead s4ep1 "In Sight of The Lord" a series of murders are committed with a large nail through the head fixing the victim to the floor. The biblical meaning of the act is explored in the process of solving the murders.

The Book of Judges is the seventh book of the Hebrew Bible and the Christian Old Testament. In the narrative of the Hebrew Bible, it covers the time between the conquest described in the Book of Joshua and the establishment of a kingdom in the Books of Samuel, during which biblical judges served as temporary leaders. The stories follow a consistent pattern: the people are unfaithful to Yahweh; he therefore delivers them into the hands of their enemies; the people repent and entreat Yahweh for mercy, which he sends in the form of a leader or champion ; the judge delivers the Israelites from oppression and they prosper, but soon they fall again into unfaithfulness and the cycle is repeated. Scholars consider many of the stories in Judges to be the oldest in the Deuteronomistic history, with their major redaction dated to the 8th century BCE and with materials such as the Song of Deborah dating from much earlier.

Zaanaim, Zaanannim or Bezaanaim is a place name applied to one or two locations in the Hebrew Bible. According to Serge Frolov (2013), its location "cannot be determined with any degree of certainty." 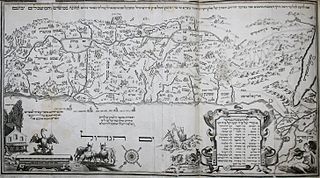 According to the Hebrew Bible, the Tribe of Zebulun was one of the twelve tribes of Israel.

According to the Book of Judges, Deborah was a prophetess of the God of the Israelites, the fourth Judge of pre-monarchic Israel and the only female judge mentioned in the Bible. Many scholars contend that the phrase, "a woman of Lappidot", as translated from biblical Hebrew in Judges 4:4 denotes her marital status as the wife of Lappidot. Alternatively, "lappid" translates as "torch" or "lightning", therefore the phrase, "woman of Lappidot" could be referencing Deborah as a "fiery woman." Deborah told Barak, an Israelite general from Kedesh in Naphtali, that God commanded him to lead an attack against the forces of Jabin king of Canaan and his military commander Sisera ; the entire narrative is recounted in chapter 4.

Barak was a ruler of Ancient Israel. As military commander in the biblical Book of Judges, Barak, with Deborah, from the Tribe of Ephraim, the prophet and fourth Judge of pre-monarchic Israel, defeated the Canaanite armies led by Sisera.

The Kishon River is a river in Israel that flows into the Mediterranean Sea near the city of Haifa. 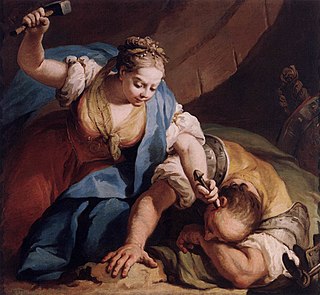 Jael or Yael is the name of the heroine who delivered Israel from the army of King Jabin of Canaan in the Book of Judges of the Hebrew Bible. After Barak failed to take action at the behest of the prophetess Deborah, God turned Sisera over to Yael, who killed him by driving a tent peg through his skull after he entered her tent near the great tree in Zaanannim near Kedesh.

Kedesh was an ancient Canaanite and later Israelite settlement in Upper Galilee, mentioned few times in the Hebrew Bible. Its remains are located in Tel Kedesh, 3 km northeast of the modern Kibbutz Malkiya in Israel on the Israeli-Lebanese border.

Jabin is a Biblical name meaning 'discerner', or 'the wise'. It may refer to:

Deborah is an oratorio by George Frideric Handel. It was one of Handel's early oratorios in English and was based on a libretto by Samuel Humphreys. It received its premiere performance at the King's Theatre in London on 17 March 1733.

Mount Tabor is located in Lower Galilee, Israel, at the eastern end of the Jezreel Valley, 18 kilometres (11 mi) west of the Sea of Galilee.

Dèbora e Jaéle is an opera in three acts composed by Ildebrando Pizzetti who also wrote the libretto. The libretto is based on the story of Deborah and Jael from the Book of Judges in the Bible. However, it differs in several ways from the traditional Biblical account, primarily in the motivations of its characters and the relationships between them. The opera was first performed at La Scala, Milan on 16 December 1922. 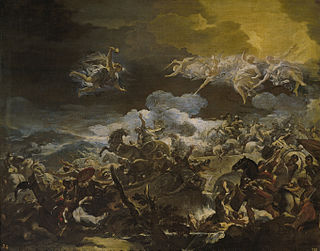 Harosheth Haggoyim is a fortress described in the Book of Judges as the fortress or cavalry base of Sisera, commander of the army of "Jabin, King of Canaan".

Adam Zertal was an Israeli archaeologist and a tenured professor at the University of Haifa.

The biblical Battle of Mount Tabor takes place during the time of the Judges between the forces of King Jabin of Canaan who ruled from Hazor, and the Israelite army led by Barak and Deborah. It is recorded in the Book of Judges, chapters 4 and 5. 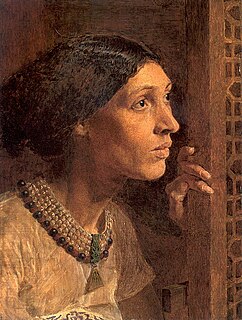 Sisera's mother is an unnamed biblical figure mentioned in the Book of Judges. Her son, Sisera, was defeated in battle by Deborah and Barak, and then killed by Yael, who drove a tent peg through his skull.

Jael and Sisera is a painting by the Italian Baroque artist Artemisia Gentileschi, executed around 1620. 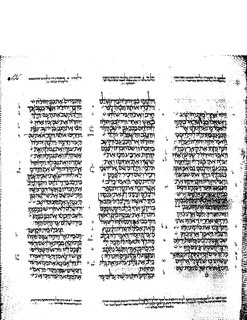 Judges 4 is the fourth chapter of the Book of Judges in the Old Testament or the Hebrew Bible. According to Jewish tradition the book was attributed to the prophet Samuel, but modern scholars view it as part of the Deuteronomistic History, which spans the books of Deuteronomy to 2 Kings, attributed to nationalistic and devotedly Yahwistic writers during the time of the reformer Judean king Josiah in 7th century BCE. This chapter records the activities of judge Deborah, belonging to a section comprising Judges 3:1 to 5:31.

Judges 5 is the fifth chapter of the Book of Judges in the Old Testament or the Hebrew Bible. According to Jewish tradition the book was attributed to the prophet Samuel, but modern scholars view it as part of the Deuteronomistic History, which spans the books of Deuteronomy to 2 Kings, attributed to nationalistic and devotedly Yahwistic writers during the time of the reformer Judean king Josiah in the 7th century BCE. This chapter records the activities of judge Deborah, belonging to a section comprising Judges 3:1 to 5:31.

Warfare in the Hebrew Bible concerns any military engagement narrated or discussed in the Hebrew Bible, also known as the Tanakh or Old Testament of the Bible. Texts about warfare in the Hebrew Bible are part of the broader topic of The Bible and violence. They cover a wide range of topics from detailed battle reports including weapons and tactics used, numbers of combatants involved, and casualties experienced, to discussions of motives and justifications for war, the sacred and secular aspects of warfare, descriptions and considerations of what in modern times would be considered war crimes such as genocide or wartime sexual violence, and reflections on wars that have happened, or predictions, visions or imaginations of wars that are yet to come.

Media related to Jael and Sisera at Wikimedia Commons