Last updated July 20, 2020
In this Malay name, the name Mohamad Ali is a patronymic, not a family name, and the person should be referred to by the given name, Siti Hasmah.

She was also the former chancellor of the Multimedia University of Malaysia.

Born in Klang, Selangor on 12 July 1926, Siti Hasmah is an ethnic Malay (retired) physician of Minangkabau descent from Negeri Sembilan, Malaysia. She schooled in SMK St. Mary. She obtained her MBBS from the University of Malaya in Singapore. [1] Tun Dr. Siti Hasmah was one of the first Malay women to enroll for a medical course at the King Edward VII College of Medicine in Singapore (now the Yong Loo Lin School of Medicine) after World War II.

In 1955 she graduated as a medical doctor from the Faculty of Medicine, Universiti Malaya, which was then located in Singapore. She subsequently joined the government health service. She was one of the first Malay woman doctors in then Malaya. She married Mahathir the following year in August. [2] They have seven children, Marina, Mirzan, Melinda, Mokhzani, Mukhriz, Maizura and Mazhar.

In 1966, she attended a public health certificate program at the School of Public Health, the University of Michigan. [3]

Siti Hasmah is the author of several articles on family medicine and the socioeconomic factors associated with pregnancy and childbearing in Malaysia.

Wife of Prime Minister of Malaysia

Siti Hasmah became the wife of Malaysia prime minister following the appointment of her husband as Prime Minister in 1981.

She used her position as the wife of the Prime Minister to campaign tirelessly for women's health, family planning, drug abuse control and adult literacy. She also served in various positions as follows:

She again served as the wife of the prime minister after her husband was reappointed on May 10, 2018.

As President of BAKTI (Welfare Club of the Wives of Ministers and Deputy Ministers), Siti Hasmah was active in efforts to educate young people about the dangers of drug abuse. In 1985, at the invitation of United States First Lady Nancy Reagan, she attended the First Ladies' Conference on Drug Abuse in Washington D.C. She also represented Malaysia at the International Conference on Drug Abuse and Illicit Trafficking in Vienna in 1987.

Siti Hasmah was also active internationally in promoting the cause of rural women. In 1992, at the invitation of Queen Fabiola of Belgium, she attended the First Ladies Summit for the Economic Advancement of Rural Women in Geneva. She was chosen as one of the six Core-Group Initiators of First Ladies representing the Asia-Pacific Region.

The summit was initiated by the International Fund for Agricultural Development (IFAD) under the patronage of Queen Fabiola. At the end of the Summit, the First Ladies endorsed the Geneva Declaration on Rural Women, an instrument to formulate policies and programmes to enhance the economic advancement and welfare of rural women and their families.

At the summit, Siti Hasmah stressed the "with proper education and training, rural women can help raise literate and productive children who, in turn, can be positive contributors to a nation's growth and prosperity."

In February 1994, Siti Hasmah attended the ISC Council Meeting in Brussels at the invitation of Queen Fabiola. Then, in September 1995, she was appointed as Chairperson of Regional Steering Committee on the Economic Advancement of Rural and Island Women for Asia Pacific Region.

Eventually, in November 1996, she took over the presidency of the International Steering Committee for Economic Advancement of Rural and Island Women for Asia Pacific Region.

Being a medical doctor by training, Siti Hasmah also has an interest in mental health. Former First Lady of the United States, Rosalynn Carter invited Siti Hasmah to serve on the National Committee of the World Federation of Mental Health which Mrs Carter chaired.

For her 23 years of public service, her voluntary work, and her leadership in the fields of public health, literacy and drug abuse control, Siti Hasmah has received many honours. The Yang di-Pertuan Agong, as well as the Sultan of Selangor and the Sultan of Kedah, have bestowed titles upon her.

In 1988, she was awarded the Kazue McLaren Award by the Asia Pacific Consortium for Public Health.

In 1991, Universiti Kebangsaan Malaysia conferred on her the Honorary Doctorate in Medical Science.

In 1992, the Royal College of Physicians, Ireland, conferred on her the Honorary Doctorate in Public Health.

On 20 June 1997 she was appointed as the Chancellor, Multimedia University (MMU) and patrons MESCORP.

In 2003, she was conferred the highest honorary title of Tun along with her husband, Dr Mahathir, by the Yang di-Pertuan Agong (King) of Malaysia. 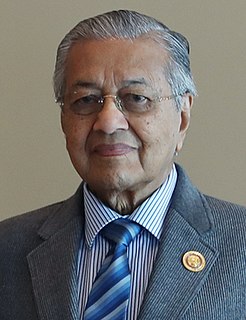 Mahathir bin Mohamad is a Malaysian statesman who served as the Prime Minister of Malaysia from 1981 to 2003 and 2018 to 2020. He is a member of the Parliament of Malaysia for the Langkawi constituency in the state of Kedah. Mahathir's political career has spanned more than 70 years starting with his participation in protests against non-Malays gaining Malaysian citizenship during the Malayan Union through to forming his own party, the Malaysian United Indigenous Party (PPBM), in 2016.

Abdullah bin Haji Ahmad Badawi is a Malaysian politician who served as the 5th Prime Minister of Malaysia from 2003 to 2009. He was also the President of the United Malays National Organisation (UMNO), the largest political party in Malaysia, and led the governing Barisan Nasional parliamentary coalition. He is informally known as Pak Lah, Pak meaning 'Uncle', while Lah is taken from his name 'Abdullah'. He is also referred to as the "Father of Human Capital Development".

The Malay language has a complex system of styles, titles and honorifics, which are used extensively in Brunei, Malaysia, and the southern Philippines.

Tun Musa bin Hitam is a Malaysian politician who was Deputy Prime Minister of Malaysia from 1981 to 1986, serving under Mahathir bin Mohamad. He was the chairman of Sime Darby Berhad.

Rafidah binti Aziz is a Malaysian politician who was Member of Parliament (MP) for the Selayang from 1978 to 1982 and Kuala Kangsar constituency from 1982 to 2013. Born in Kuala Kangsar, Perak, Rafidah was Minister of International Trade and Industry from 1987 to 2008. As minister, she was the chairman of MATRADE beginning in 1991. Presently she is a member of Malaysian United Indigenous Party or Parti Pribumi Bersatu Malaysia (BERSATU), a component of Pakatan Harapan (PH) coalition, after she was sacked from United Malays National Organisation (UMNO) of Barisan Nasional (BN) in 2018.

Dato' Sri Azalina binti Othman Said is a Malaysian politician who has served as Deputy Speaker of the Dewan Rakyat in the Perikatan Nasional (PN) administration since July 2020. She created a first by being the first female holder of deputy speakership. She has been the Member of Parliament (MP) for Pengerang since March 2004. She is a member of the Supreme Council of the United Malays National Organisation (UMNO), the major component party of the ruling PN coalition. Azalina was the Minister in the Prime Minister's Department from July 2015 to May 2018, Minister of Tourism from March 2008 to April 2009 and the Minister of Youth and Sports from March 2004 to March 2008.

Datin Paduka Marina binti Mahathir is a Malaysian socio-political activist and writer. She is the eldest child of the 4th and 7th Prime Minister of Malaysia, Tun Mahathir Mohammad and Siti Hasmah Mohamad Ali. She graduated from the University of Sussex.

SimplySiti Sdn. Bhd., is a Malaysian cosmetic company founded by a Malaysian singer, Siti Nurhaliza in March 2010 with the headquarters in Kuala Lumpur, Malaysia. The brand's name was derived from the word “simplicity”.

Teater Tun Siti Hasmah is a Malaysian play directed by Erma Fatima and starring Lisa Surihani, Eja, Nazim Othman and Esma Danial. It depicts the life of Tun Dr. Siti Hasmah Mohamad Ali, wife of Malaysian prime minister Tun Dr. Mahathir Mohamad, concentrating largely on her role as a doctor and medical officer in her youth before becoming Malaysia's first lady. The play was produced in November 2012 at the Istana Budaya, Malaysia's "Palace of Culture" and main theatrical venue.

Tan Sri Dato' Sri Dr. Siti Zaharah binti Sulaiman is a Malaysian politician. She also was the Minister of National Unity and Community Development, Malaysia. She was Chief of the Women's wing of the United Malays National Organisation (UMNO) from 1996 to 1999. Siti Zaharah is a former member of the parliamentary constituency of Paya Besar, in Pahang for three terms from 1999 to 2008. In 2008 general election, she was replaced by Abdul Manan Ismail from BN-UMNO.

Datuk Seri Rina binti Mohd Harun is a Malaysian politician who has served as Minister of Women, Family and Community Development in the Perikatan Nasional (PN) administration under Prime Minister Muhyiddin Yassin since March 2020. She served as Minister of Rural Development in the Pakatan Harapan (PH) administration under former Prime Minister Mahathir Mohamad from May 2018 to the regime change in February 2020 for less than 2 years. She is also the Women's Chief of the Malaysian United Indigenous Party (BERSATU), a component party of the PN coalition. Rina won the parliamentary seat of Titiwangsa in the 2018 Malaysian general election in May 2018.

Datuk Seri Haji Mohd Adib Mohamad Adam is a Malaysian politician and corporate member. He also is the former fifth Chief Minister of Malacca from 11 Julai 1978 to 26 April 1982. He also held before the position of Minister of Rural Development, Cooperatives and Entrepreneurship (1984-1986) and Minister of Information (1982-1984). He was a member of the United Malays National Organisation (UMNO), a component party in the previous Barisan Nasional (BN) government coalition before he quits to join the Malaysian United Indigenous Party (BERSATU) of the Pakatan Harapan (PH) coalition of the new government in 2018.

Sharifah Azah Mohammad Alsagoff / Norazah Abdul Aziz or Azah Aziz, but better known as Mak Ungku is a Malay cultural figure in Malaysia. She was the wife of Professor Diraja Ungku Abdul Aziz and the mother of former the Governor of Bank Negara Malaysia, Tan Sri Dr. Zeti Akhtar Aziz.

The Faculty of Medicine, University of Malaya is one of the thirteen faculties of the University of Malaya (UM). It was officially established in September 1962 after the establishment of the university's Kuala Lumpur campus; it was the first medical school established in Malaysia. The faculty is well-known for its medical education and research, especially in the discovery of the Nipah virus. The faculty is widely regarded as the top medical school in Malaysia, being placed at No. 101–150 in medicine in the QS World University Rankings 2020; this makes it the highest ranked medical school in Malaysia and the third highest in Southeast Asia.