Last updated July 23, 2022
Open-air museum in Sweden
This article is about the museum in Stockholm. For the district of Turku, Finland, see Skanssi.

Skansen (Swedish:  [ˈskǎnːsɛn] ; "the Sconce") is the oldest open-air museum and zoo in Sweden located on the island Djurgården in Stockholm, Sweden. It was opened on 11 October 1891 by Artur Hazelius (1833–1901) to show the way of life in the different parts of Sweden before the industrial era.

The name Skansen has also been used as a noun to refer to other open-air museums and collections of historic structures, particularly in Central and Eastern Europe, but also in the United States, e.g. Old World Wisconsin and Fairplay, Colorado.

The 19th century was a period of great change throughout Europe, and Sweden was no exception. Its rural way of life was rapidly giving way to an industrialised society and many feared that the country's many traditional customs and occupations might be lost to history. Artur Hazelius, who had previously founded the Nordic Museum on the island of Djurgården near the centre of Stockholm, was inspired by the open-air museum, founded by King Oscar II in Kristiania in 1881, when he created his open-air museum on the hill that dominates the island. Skansen became the model for other early open-air museums in Scandinavia and later ones elsewhere.

After extensive travelling, Hazelius bought around 150 houses from all over the country (as well as one structure from Telemark in Norway) and had them shipped piece by piece to the museum, where they were rebuilt to provide a unique picture of traditional Sweden. Only three of the buildings in the museum are not original, and were painstakingly copied from examples he had found. All of the buildings are open to visitors and show the full range of Swedish life from the Skogaholm Manor house built in 1680, to the 16th century Älvros farmhouses.

Skansen attracts more than 1.3 million visitors each year. [2] The many exhibits over the 75 acre (300,000 m²) site include a full replica of an average 19th-century town, in which craftsmen in traditional dress such as tanners, shoemakers, silversmiths, bakers and glass-blowers demonstrate their skills in period surroundings. There is even a small patch growing tobacco used for the making of cigarettes. There is also an open-air zoo containing a wide range of Scandinavian animals including the brown bear, moose, grey seal, lynx, otter, reindeer, harbour seal, Eurasian eagle owl, great grey owl and wolverine, as well as some non-Scandinavian animals. There are also farmsteads where rare breeds of farm animals can be seen.

In early December the site's central Bollnäs square is host to a popular Christmas market that has been held since 1903, attracting around 25,000 visitors each weekend. In the summer there are displays of folk dancing and concerts.

Since 1897, Skansen has been served by the Skansens Bergbana, a funicular railway on the northwest side of the Skansen hill. The funicular is 196.4 meters long, with a total rise of 34.57 meters. [3]

Skansen is also served by trams on line 7. 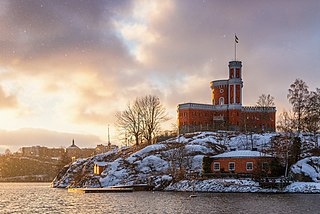 Stockholm is the capital and largest city of Sweden as well as the largest urban area in Scandinavia. Approximately 980,000 people live in the municipality, with 1.6 million in the urban area, and 2.4 million in the metropolitan area. The city stretches across fourteen islands where Lake Mälaren flows into the Baltic Sea. Outside the city to the east, and along the coast, is the island chain of the Stockholm archipelago. The area has been settled since the Stone Age, in the 6th millennium BC, and was founded as a city in 1252 by Swedish statesman Birger Jarl. It is also the county seat of Stockholm County. For several hundred years, Stockholm was the capital of Finland as well, which then was a part of Sweden. The population of the municipality of Stockholm is expected to reach one million people in 2022.

Apart from being a large city with an active cultural life, Stockholm, the capital of Sweden, houses many national cultural institutions. There are two UNESCO World Heritage Sites in the Stockholm County area: the Royal Palace Drottningholm and the Skogskyrkogården. 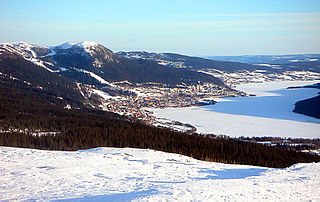 Åre is a locality and one of the leading Scandinavian ski resorts situated in Åre Municipality, Jämtland County, Sweden with 3,200 inhabitants in 2018. It is, however, not the seat of the municipality, which is Järpen. 25% of the municipal industry is based on tourism, most notably the downhill skiing and biking resorts in Åre, Duved and Storlien. The growth in tourism has resulted in the development of hotels, recreational and shopping opportunities in the area.

Artur Immanuel Hazelius was a Swedish teacher, scholar, folklorist and museum director. He was the founder of both the Nordic Museum and the Skansen open-air museum in Stockholm.

An open-air museum is a museum that exhibits collections of buildings and artifacts out-of-doors. It is also frequently known as a museum of buildings or a folk museum.

The Nordic Museum is a museum located on Djurgården, an island in central Stockholm, Sweden, dedicated to the cultural history and ethnography of Sweden from the early modern period to the contemporary period. The museum was founded in the late 19th century by Artur Hazelius, who also founded the open-air museum Skansen. For long part of the museum, the institutions were made independent of each other in 1963. 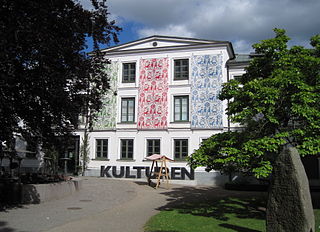 Kulturen is an open air museum in Lund in Lund, Sweden. Occupying two blocks in central Lund, Kulturen is Sweden's and the world's second oldest open-air museum after Skansen in Stockholm. It contains historic buildings, dating from the Middle Ages to the 1930s, set in gardens or cobblestone streets. The complete name of the museum is Kulturhistoriska föreningen för södra Sverige. 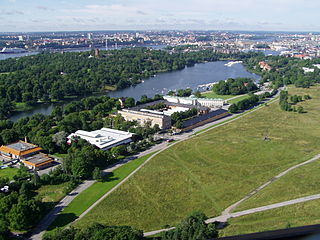 Djurgårdsbrunnsviken is a bay in central Stockholm, Sweden, together with the canal Djurgårdsbrunnskanalen forming the northern shore line of the island Djurgården. The bridge Djurgårdsbron stretches over the bay.

The Skansens Bergbana is a funicular railway in the Skansen open-air museum and zoo, located on the island of Djurgården in Stockholm, Sweden.

The General Art and Industrial Exposition of Stockholm of 1897 also known as Stockholm Exhibition or Stockholm World's Fair (Stockholmsutställningen) was a World's Fair staged in 1897 in Stockholm, Sweden.

A folk museum is a museum that deals with folk culture and heritage. Such museums cover local life in rural communities. A folk museum typically displays historical objects that were used as part of the people's everyday lives. Examples of such objects include clothes and tools. Many folk museums are also open-air museums and some cover rural history. 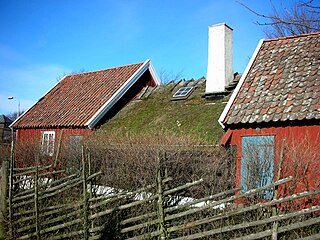 The Bexell Cottage is a small cottage in Varberg, Sweden. It has been turned into a historical heritage mini-museum. In Bexell Cottage there are furnitures and painted wall tapestry from the 19th century. The tapestry cover the walls and ceiling of the cottage. Originally, they were only used for Christmas, but today they are posted all the year around. Bexell Cottage can be visited by the public at the shows of the cottage that are arranged by Halland Museum of Cultural History.

Nils Erik Bæhrendtz was a Swedish literary historian, and radio and television personality. Bæhrendtz played an important role in creating Sweden's first television news show Aktuellt, and in bringing new television show formats to Sweden. He was head of Swedish Radio and Swedish Television during the 1960s. After his sudden resignation as powerful manager, he was the executive president of the Skansen open-air museum foundation in Stockholm during the 1970s.

Known as the father of bondkomik, Jödde i Göljaryd (1855–1900) was a beloved storyteller, whose folk humor and songs dominated popular culture in Sweden during the 1890s.

The Baltic Sea Science Center in Stockholm is part of the open-air museum Skansen, and showcases the Baltic marine environment and its threats, using aquariums, exhibitions, and educational activities.

Gunnel Gunnarsdotter Hazelius-Berg née Hazelius (1905–1997) was a Swedish museum curator, textile researcher and writer. She spent her entire professional career at Stockholm's Nordic Museum. As the director responsible for textiles, over the years she arranged several highly acclaimed exhibitions. Hazelius-Berg took a special interest in traditional Swedish costumes. Together with her daughter-in-law Inga Arnö-Berg, in 1975 she published Folkdräkter och bygdedräkter från hela Sverige which was translated into English as Folk Costumes of Sweden: A Living Tradition. 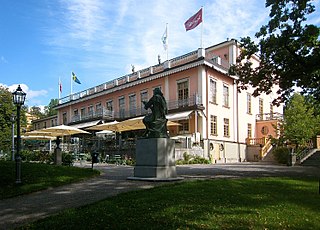 Hasselbacken is a restaurant in Cirkus, Djurgården in Stockholm, Sweden with a connection to a hotel at Hazelliusbacken 20 in Södra Djurgården with a history dating back to 1748.

Wikimedia Commons has media related to Skansen .
This page is based on this Wikipedia article
Text is available under the CC BY-SA 4.0 license; additional terms may apply.
Images, videos and audio are available under their respective licenses.