The town is a coastal town but doesn't have a marina. The town has good beach access from the Strandvej and from the houses along the shore. A wide beach allows easy access along the coast. The western side of Skodsborg borders the Jægersborg Dyrehave with miles of trails for hiking and cycling. The town is connected with the Oresundtrain and with buses to neighboring communities.

Skodsborg was a late developed community on the Oresund coast being hemmed in by the king's hunting forest of Dyrehaven. For many years it was just a stretch of coastal road with a few summer residences of rich Copenhagen dignitaries and the Mølleå industry.

The river to the north of Skodsborg, Mølleåen was the site of the earliest Danish industrial production. The first Danish paper mill was located here in 1599, as one of seven water mills driven factories on the river. In 1785 two enterprising English industrialists Nelthropp and Harris who established the country's largest leather goods manufacturing plant. They were bankrupted in 1803 during the Napoleonic wars, where England was the enemy, and they were condemned as spies.

Skodsborg continued its unique dual evolution as summer residence for the very rich with two hotels and a spa catering to the same clientele - along with its role as an active industrial town producing paper, cloth and hats.

The most prominent dweller in Skodsborg was undoubtedly King Frederick VII. In 1852, he bought the Skodsborg summer residence built by Volrad von der Lühe a century earlier and spent the summers there until his death in 1863. He wanted a place away from the court gossip at Amalienborg aimed at his down to earth commoner wife, Louise Rasmussen, enabled with the title of countess Danner. The king who three years earlier has signed the Danish constitution cementing parliamentary rule, wanted peace and quiet to ride, hunt and fish. He was an amateur archaeologist and outdoors man who enjoyed excavating the Bronze Age burial mounds in the surrounding woodland and sleeping in his tent. However, his presence also required the grand railway station still in use today, in order to meet and greet foreign dignitaries.

In 1910 the Danish social democrat leader and later Prime Minister, Thorvald Stauning invited the Second Socialt International meeting in Copenhagen to visit Skodsborg. The visitors included Vladimir Lenin, Karl Liebknecht, Rosa Luxembourg and Alexandra Kollontay. In Skodsborg they met a thriving working community with their own school and cooperative.

In 1913 Skodsborg saw the creation of Dansk Hattefabrik A/S (the Danish Hat Manufacturer Ltd), established by the visionary industrialist Hans Cohen came from Berlin . At its zenith in 1950 the plant was producing 500.000 hats a year.

Rolighed, meaning "tranquility", was originally a large wooden house built in 1794 for the Norwegian civil servant Carsten Anker. In 1855, the house was acquired by Ludvig Grøn, owner of Det Grønske Handelshus, Copenhagen's first department store. The house remained in the hands of his family until 1958. The current ahouse is from 1827. It is now owned by A.P. Møller-Mærsk and used as a conference centre.

Helsingør, classically known in English as Elsinore, is a city in eastern Denmark. Helsingør Municipality had a population of 62,686 on 1 January 2018. Helsingør and Helsingborg in Sweden together form the northern reaches of the Øresund Region, centered on Copenhagen and Malmö. The HH Ferry route connects Helsingør with Helsingborg, 4 km across the Øresund. 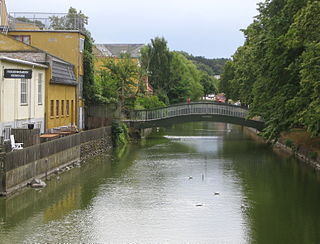 Frederiksværk is a town with a population of 12,680 in Halsnæs Municipality on Zealand in Region Hovedstaden in Denmark. 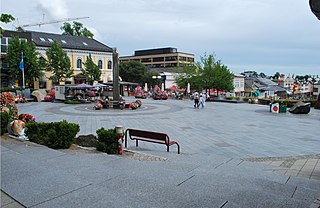 Hørsholm is an urban area on the Øresund coast approximately 25 km (15.53 mi) north of Copenhagen, Denmark. It covers most of Hørsholm Municipality and straddles the borders neighbouring Fredensborg Municipality and Rudersdal Municipality. 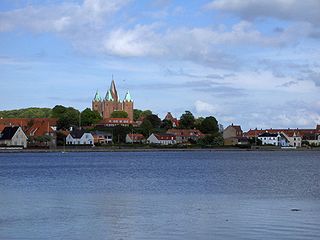 Kalundborg is a Danish city with a population of 16,268, the main town of the municipality of the same name and the site of its municipal council. It is situated on the northwestern coast of the largest Danish island, Zealand, on the opposite, eastern side of which lies the capital Copenhagen, 110 km (68 mi) away.

Vedbæk is a wealthy suburban neighbourhood on the coast north of Copenhagen, Denmark. It belongs to Rudersdal Municipality and has merged with the town of Hørsholm to the north. The area has been inhabited for at least 7,000 years, as evidenced by the discovery of a Mesolithic cemetery of the Ertebølle culture. By the 16th century, there were a few small farms and fishermen's houses on the site and in the 18th century, well-to-do townsfolk from Copenhagen started to build country houses in the area. After a paddle steamer began to call at Vedbæk on its journey from Copenhagen to Helsingør, there was an influx of visitors. There are a number of large country houses and a historic church. There has been a railway station for some time and there are popular sandy beaches to the north and south. Enrum Forest is open to the public and provides recreational facilities.

Espergærde is a town situated in North Zealand near Øresund in Denmark and is statistically considered part of the larger urban area Espergærde-Snekkersten-Elsinore, some 5 to 8 km south of the centre of Elsinore and in reality separated from the urban area of Elsinore-Snekkersten by a 100 m wide unbuilt area, Egebæksvang forest and area under natural protection around Flynderupgård. The urban area of Espergærde also covers the two former villages Tibberup and Mørdrup and part of the former fishing village of Skotterup, with 11.524 inhabitants (2008). Espergærde is well limited to the north by Egebæksvang forest and Flynderupgård, to the west by Rolighedsmoserne and Helsingørmotorvejen, to the south by Krogerup mansion fields and Babyloneskoven. Espergærde is part of Region Hovedstaden. 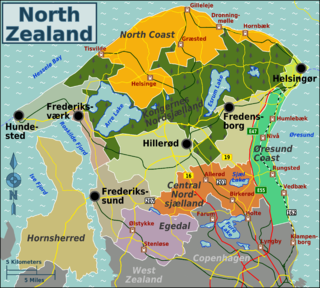 Marienlyst Castle is a palatial residence located in Helsingør, Denmark. It was named after King Frederik V of Denmark's second wife, Juliana Maria, the queen consort of Denmark and Norway. The building formerly served as a royal pavilion of Kronborg Castle and was mostly used as a venue for pleasure and hunting. It was also used by the director-general of the Øresund Custom House, Colonel Adam Gottlob von Krogh and his wife Magdalene, between 1796 and 1847. 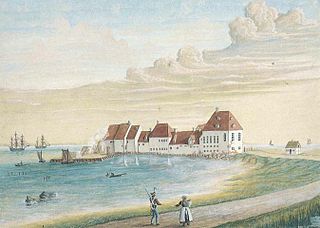 Jacob Fortling was a German-Danish sculptor, architect and industrialist, described as one of the most industrious people in the Denmark of his day. He came to Denmark at age 18 and embarked on a successful career, first as a sculptor and later also as an architect. He was also engaged in the production of building materials, owning several quarries in Norway. Just outside Copenhagen, on Amager's east coast, he founded Kastrup Værk, a large industrial facility combining a lime plant, a brickyard and a pottery.

Hellebæk is a town located on the coast five kilometres northwest of Helsingør, North Zealand, some 40 kilometres north of Copenhagen, Denmark. It has merged with the neighbouring community of Ålsgårde to form an urban agglomeration with a population of 5,754.

Taarbæk is a neighbourhood in Lyngby-Taarbæk Municipality. The neighbourhood covers approximately 0.5 km2, located between Jægersborg Dyrehave and Øresund. The population is estimated to ca. 1700 residents. Traditionally, Taarbæk was a fishing village but, nowadays, the village is inhabited by people from the middle or upper class. Taarbæk is named after a former village called Torsbæk, which was located just north of where Taarbæk is today. The giant container ship Emma Mærsk is home-ported in Taarbæk.

Skodsborg Spa Hotel is a hotel and health resort in Skodsborg, on the Strandvejen coastal road, 15 km north of Copenhagen, Denmark. It was named the Best Luxury Wellness Spa in Europe by the international World Luxury Hotel Awards in 2016. 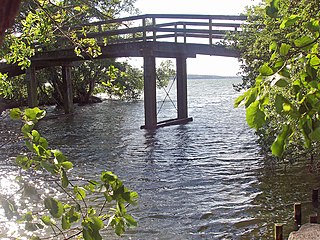 Mølleåen, also Mølleå, sometimes translated as the Millstream, is a small river in North Zealand, Denmark, which runs 36 kilometres (22 mi) from the west of Bastrup Sø near Lynge to the Øresund between Taarbæk and Skodsborg. The valley contains several country houses and a series of mills which initiated Denmark's industrial development.

Maglekilde is the most powerful of several natural springs in Roskilde, Denmark. It formerly issued water at a rate of some 90,000 litres per hour but has now dropped to 15,000 litres per hour. A wellhouse was built over the spring in 1927. The building was listed in the Danish registry of protected buildings and places in 1979.

Strandmøllen is a former paper mill located at the mouth of the Mølleåen river in the Øresund coast north of Copenhagen, Denmark. 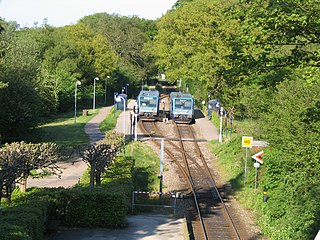 Ørholm is a neighbourhood and locality on the Mølleåen river in Lyngby-Taarbæk Municipality in the northern suburbs of Copenhagen9, Denmark. Ørholm Watermill has a history that dates back to at least the 15th century but the current industrial buildings were constructed after fires in 1886 and 1913. Ørholm House, a residence dating from the mid-18th century, is privately owned and heritage listed. Ørholm Station is located on the Nærum Railway and is served by the railway company Lokaltog. 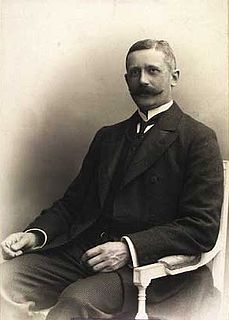 Christian Hasselbalch was a Danish industrialist and merchant. He founded Hasselbalch & Co.