Slatina is a town in the Slavonia region of Croatia. It is located in the Virovitica-Podravina County, at the contact of the Drava valley and the foothills of Papuk mountain, in the central part of the region of Podravina, 29 km (18 mi) southeast of Virovitica; elevation 127 metres (417 feet). It was ruled by Ottoman Empire between 1542 and 1687, when it was captured by Austrian troops. During Ottoman rule it was initially part of Sanjak of Pojega between 1542 and 1601, latterly part of Sanjak of Rahoviçe between 1601 and 1687. It was district centre at Virovitica County in Kingdom of Croatia-Slavonia between 1868 and 1918.

"Slatina" means "salt lake" in Croatian. However, there is no salt lake there any more. [2] [ dubious – discuss ]

Valpovo is a town in Slavonia, Croatia. It is close to the Drava river in the region of Slavonia, 25 km (16 mi) northwest of Osijek. The population of Valpovo is 7,406, with a total of 11,563 in the municipality. 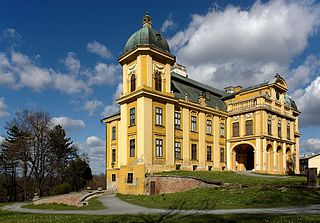 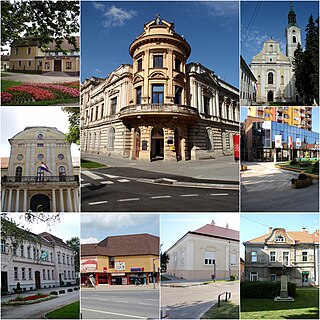 Virovitica is a Croatian city near the Hungarian border. It is situated near the Drava river and belongs to the historic region of Slavonia. Virovitica has a population of 14,688, with 21,291 people in the municipality. It is also the capital of Virovitica-Podravina County. 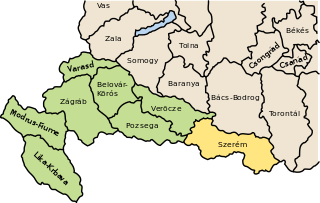 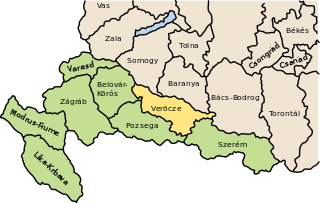 Virovitica County was a historic administrative subdivision (županija) of the Kingdom of Croatia-Slavonia. Croatia-Slavonia was an autonomous kingdom within the Lands of the Crown of Saint Stephen (Transleithania), the Hungarian part of the dual Austro-Hungarian Empire. Its territory is now in eastern Croatia. The name of the county comes from the town of Virovitica. The capital of the county moved from Virovitica to Osijek in the late 18th century. 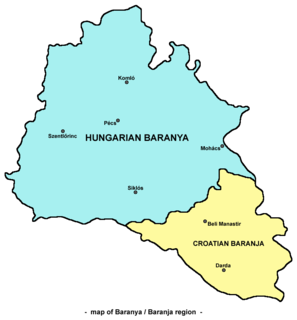 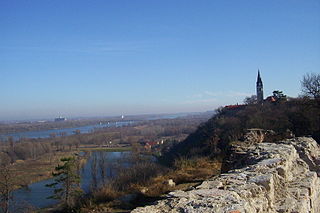 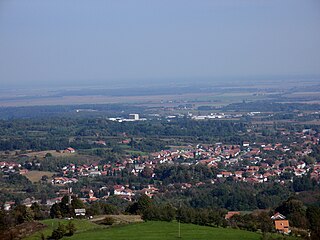 Velika is a village and a municipality in the Požega Valley in Slavonia.

Pitomača is a municipality in Croatia in the Virovitica–Podravina County. It has a population of 10,059, of whom 98.62% are Croats.

Čađavica is a village and municipality in Croatia in the Virovitica–Podravina County. It has a population of 2,009, of which 90% are Croats. It is situated 14 kilometers NE of Slatina. Until 1920 it was an integral part of Hungary.

Špišić Bukovica is a municipality in Croatia in the Virovitica–Podravina County.