The first issue of Slobodna Dalmacija was published on 17 June 1943 by Tito's Partisans in an abandoned stone barn [2] on Mosor, a mountain near Split, while the city was occupied by the Italian army. The paper was later published in various locations until Split was liberated on 26 October 1944. From the following day onward, Slobodna Dalmacija has been published in Split.

Although it was originally viewed as a strictly Dalmatian regional newspaper, during the following decades Slobodna Dalmacija, grew into one of the largest and most widely read daily newspapers of Yugoslavia, with its circulation reaching a zenith in the late 1980s. Slobodna Dalmacija owed much of that success to its humour section. Many of the most popular Croatian humourists, like Miljenko Smoje, Đermano Ćićo Senjanović and the trio that later founded the Feral Tribune , began their careers there. [ citation needed ]

Another reason for this success was the editorial policy of Joško Kulušić, who used the decline of Communism to allow the paper to become a forum for new political ideas. In the early 1990s Slobodna Dalmacija established a reputation as the newspaper with the most politically diverse group of columnists - from the extreme left to the extreme right. [ citation needed ]

In 1992, the government initiated proceedings against the paper, which would ultimately result in one of the most notorious scandals in recent Croatian history. Slobodna Dalmacija was privatised, which resulted in Miroslav Kutle, a Zagreb businessman, becoming the new owner. After a brief attempt to prevent the handover by strike, the paper was formally taken over in March 1993. [ citation needed ]

After the war ended in 1995, Slobodna Dalmacija was faced with serious financial problems. In the late 1990s the newspaper was again taken over by the government. However, it retained its distinctively hard-line nationalist stance, even during the first year of Prime Minister Ivica Račan's left-of-center government. [ citation needed ]

In May 2005 Slobodna Dalmacija was reprivatised again. This time it was sold to Europapress Holding, making it a sister paper of Jutarnji list . In 2014 it was bought by Marijan Hanžeković along with EPH and became more of a right-wing newspaper. There have been situations where left oriented journalist were forbidden to write what they want (such as Damir Pilić in 2015) and some were fired (such as Boris Dežulović). 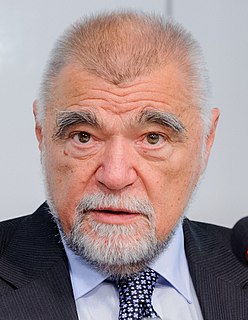 Stjepan "Stipe" Mesić is a Croatian lawyer and politician who served as President of Croatia from 2000 to 2010. Before serving two five-year terms as president, he was prime minister of SR Croatia (1990) after the first multi-party elections, the last president of the Presidency of Yugoslavia (1991) and consequently secretary general of the Non-Aligned Movement (1991), as well as speaker of the Croatian Parliament (1992–1994), a judge in Našice, and mayor of his hometown of Orahovica.

Nedjeljna Dalmacija was a Yugoslavian regional weekly newspaper based in Croatia, published from 1971 until 2002 in the cities of Split and Zagreb.

Mate "Mišo" Kovač is a Croatian recording artist. He is the best selling artist from Croatia, with well over 20 million records, cassettes and compact discs sold to date, and is often regarded as one of the most popular musical performers from Southeastern Europe.

Viktor Ivančić is a Croatian journalist, best known as the founding member and long-time editor-in-chief of satirical weekly Feral Tribune.

Boris Dežulović is a Croatian journalist, writer and columnist, best known as one of the founders of the now defunct satirical magazine Feral Tribune.

Hanza Media is the leading media company in Croatia and Southeast Europe, with 5 daily newspapers, more than 20 magazines, and 20 digital editions. 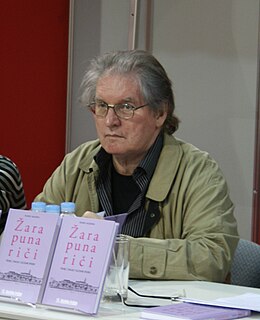 Vasko Lipovac was a Croatian painter, sculptor, printmaker, designer, illustrator and scenographer and one of the most prominent artists of the region. He is best known for his minimalist figuration and use of intense, unmodulated and often dissonant palette. With the exception of his juvenile period of geometric abstraction, he remained loyal to figuration throughout his whole career. Exceptionally prolific, he worked in various techniques and was equally skilful in using high-polished metal, polychromous wood, enamel, terracotta or polyester to create his sculptures, reliefs and mobiles. 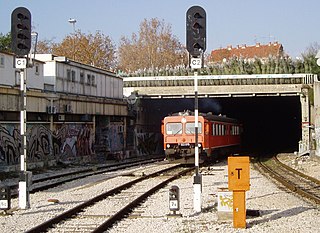 The Split Suburban Railway is a suburban railway network in Split, Croatia. The railway was opened on refurbished existing M604 tracks on December 10, 2006. It consists of one line serving seven stations, running from Split centre to Kaštel Stari. The second line between Split centre and Split-Kopilica opened in June 2019, and was discontinued in November 2019. As of 2019, it is planned that new stations will be added along the tracks and the existing stops renovated. The line runs through two tunnels within the city centre of Split; within the longer of the two tunnels a metro-like station (Split-H.B.Z.) will be opened in 2021 to serve the city centre. The line is 17.8 kilometres (11.1 mi) long while an average train ride lasts for 25 minutes. A link with Split Airport and further extension to Trogir is considered, with possible electrification in the long-term.

Stjepan Đureković was a Croatian political dissident and businessman who was assassinated by the Yugoslavian State Security Administration (UDBA) in West Germany in 1983. He was previously the CEO of the state-owned INA petrol company. In 1982, he defected to West Germany and became active in Croatian émigré circles opposed to Yugoslavia.

Heart of Hajduk is an annual football award established in 1994 and officially awarded by the Hajduk Split supporters' association Torcida Split to the Hajduk player of the year.

House on the Sand is the only feature film directed by Ivan Martinac, one of the key figures of Croatian avant-garde and underground film scene.

This is a list of events taking place in 2012 related to Croatian television.

Josip Vuković is a Croatian footballer who plays as a midfielder for Hajduk Split.

Denis Periša is a political activist, whistle blower and computer hacker from Šibenik, Croatia. He was convicted and criminally charged in September 1999. He was forbidden to use computer systems or internet for hacking e-mail of politician Veselin Pejnović and planting backdoor to his network. He founded the computer security website Jezgra.org in 1997 that is still active today. Founder of ŠI-WIFI wireless organization for his town in late 2005. Denis also claims himself to be a DJ, photographer and recently a writer of the book called "My first suicide", which has yet to be released.

Josip Juranović is a Croatian footballer who plays as a defender for Legia Warsaw.