The Slovak Super Cup (Slovenský Superpohár in Slovak), in the past named as Matičný pohár or Pribinov pohár, is a football match between champion of the Corgoň Liga and winner of the Slovak Cup. The cup is played annually besides years when a club clinches the double.

In 1993 there was played unofficial first match between Slovan Bratislava and the Slovakia national football team consisted with the Slovak First League players. The Slovak Supercup was discontinued in 2016 and replaced by the Czechoslovak Supercup from 2017 onward.

The Czech Cup, officially known as the MOL Cup for sponsorship reasons, is the major men's football cup competition in the Czech Republic. It is organised by the Czech Football Association.

Marián Masný is a Slovak former football player. He played for Czechoslovakia, for which he played 75 matches and scored 18 goals. His brother Vojtech was also football player. 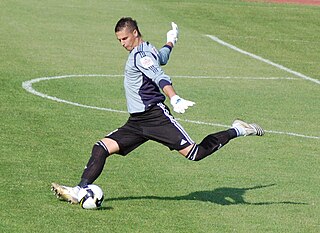 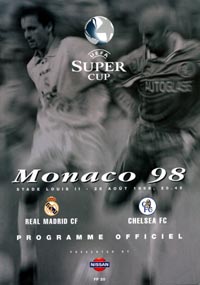 The 1998 UEFA Super Cup was a football match that was played on 28 August 1998 at Stade Louis II, Monaco, contested between Champions League winners Real Madrid and Cup Winners' Cup holders Chelsea. Neither team had previously won the trophy. Chelsea won the match 1–0 with a late goal from Gus Poyet. 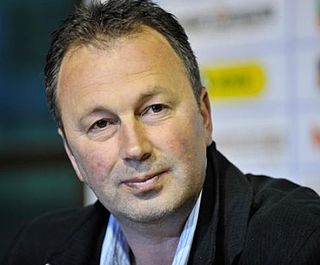 Angel Chervenkov is a Bulgarian former footballer and football manager.

The 1997 UEFA Super Cup was a two-legged football match played on 8 January 1998 and 11 March 1998 between Borussia Dortmund of Germany, winner of the 1996–97 UEFA Champions League and Barcelona of Spain, winner of the 1996–97 UEFA Cup Winners' Cup. Barcelona won the match 3–1 on aggregate, beating Borussia Dortmund 2–0 at Camp Nou in the first leg and drawing the second leg 1–1 in Westfalenstadion, Dortmund. 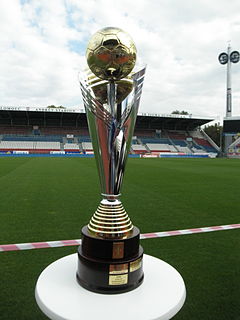 The 2010–11 Slovak Cup was the forty-second season of Slovakia's annual knock-out football cup competition and the eighteenth since the independence of Slovakia. It began on 23 August 2010 and will ended on 8 May 2011 with the final. As the 22nd ranked league system using the UEFA coefficient, the winners of the competition will earn a place in the third qualifying round of the UEFA Europa League.

The DFL-Ligapokal[ˈdeː ʔɛf ɛlː liːgaːpoˈkaːl] or the German League Cup was a German football competition that took place before the start of the Bundesliga season, featuring the top five teams of the previous Bundesliga season and the winners of the DFB-Pokal in Germany. The cup was known as the Premiere-Ligapokal after 2005, when Premiere, a German pay television network, took up sponsorship of the competition. The Ligapokal was not held in 2008 due to schedule crowding caused by the UEFA Euro 2008. Instead, the T-Home German Supercup was held on 23 July 2008. The DFL-Ligapokal was not held in 2009 either, due to the German Football Association's decision to abolish it. On the last edition of the DFL-Ligapokal, in 2007, the fifth-placed Bundesliga team was dropped from the competition, replaced by the winner of the 2. Bundesliga (Karlsruhe).

The 2004 Slovak Cup Final was the final match of the 2003–04 Slovak Cup, the 35th season of the top cup competition in Slovak football. The match was played at the DAC Stadion in Dunajská Streda on 8 May 2004 between FC Artmedia Petržalka and FC Steel Trans Ličartovce. Artmedia defeated Ličartovce 2-0.

The 2007 Slovak Cup Final was the final match of the 2006–07 Slovak Cup, the 38th season of the top cup competition in Slovak football. The match was played at the Pasienky in Bratislava on 8 May 2007 between FC Senec and FC ViOn Zlaté Moravce. FC ViOn defeated Senec 4-0.

The Czechoslovak Supercup is an annual football match between the winners of the Czech Cup and the Slovak Cup.