Smilja Avramov (15 February 1918 – 2 October 2018) was a Serbian academician, legal scholar, social activist and educator in international law. [2] She was a member of the Senate of Republika Srpska from 1996 to 2009. [3] Before she retired she was a Professor of International law at the Law Faculty at Belgrade University. [4]

Avramov finished high school in Sušak, Kingdom of Yugoslavia, in 1936. She was maternally related to Petar Preradović and Pavle Solarić. [5] During World War II, eleven members of her family were murdered at Jasenovac concentration camp. [6]

As distinguished scholar Avramov was a member of the first convocation of the Senate of Republika Srpska, serving from 1996 to 2009. Avramov was also a member of Committee on Formation of Customary (General) International Law whose report was submitted at London conference held in 2000. [8] Avramov was president of the International Confederation for Disarmament and Peace. Since 1999 Avramov has been a member of the presidency of the movement "Women authors – Conscience of Serbia". [6]

She publicly opposed the practice of humanitarian interventionism, emphasizing that the main danger for the modern world is neither nationalism or communism, but legal nihilism. [9]

In her work The Trilateral, she alleged a conspiracy of the Bilderberg Group, the Council on Foreign Relations and the Trilateral Commission in the context of Balkans politics and global relations. [10] In 2006 Avramov was one of the professors who signed the request for rehabilitation of Dragoljub Mihailović. [11] She served as an advisor to Slobodan Milošević between 1991 and 1992 and was a witness for the defence at his trial in 2004. [12] [13] She helped to found the Committee for the Protection of Serbs from the Hague Tribunal and was a member of the International Committee for the Truth of Radovan Karadzic, also assisting with his unsuccessful defence on charges of war crimes. [13]

Avramov expressed her disagreement in 2013 when the Government of Serbia signed the Brussels Agreement with the Government of Kosovo, saying that it violates Serbia's constitution and the United Nations Charter and indirectly recognizes Kosovo as an independent state. [14]

Gjilan or Gnjilane, is a city and municipality located in the Gjilan District in eastern Kosovo. According to the 2011 census, the city of Gjilan has 54,239 inhabitants, while the municipality has 90,178 inhabitants.

Arnautović is a Serbo-Croatian surname, borne by ethnic Serbs, and to a lesser extent Bosniaks, derived from the word "Arnaut", an Ottoman term used to denote Albanians or people from Albania; though in Serbo-Croatian usage, the word Arnaut(in) was also used as a pejorative, meaning "evil", "malicious" and "murderous", used as a nickname - for instance, Serbian families got this surname from an ancestor who was a murderer and was nicknamed "Arnautin". It was also simply given to Serb immigrants from Albanian-inhabited areas (arnautluk), or from near Albanian-inhabited areas. A Jovan Radić, a Serb, is recorded with the byname Arnautović in 1682. At least 254 individuals with the surname died at the Jasenovac concentration camp.

The Monastery of the Holy Archangels is a Serbian Orthodox monastery located in Prizren, in Kosovo, founded by the Serbian Emperor Stefan Dušan between 1343 and 1352 on the site of an earlier church, part of the Višegrad fortress complex. It was the burial church for Emperor Dušan, and represented the culmination of the Serbian ecclesiastical architectural style, that led to the birth of the Morava school style.

This is a list of Serbian manuscripts, containing important works attributed to Serbia or Serbs. The majority of works are theological, with a few biographies and constitutions. The works were written in Cyrillic, except some early works in the Glagolitic script.

Avram Miletić was a merchant and writer of epic folk songs who is best known for writing the earliest collection of urban lyric poetry in Serbian language between 1778 and 1781.

The Vulnetari ("volunteers") were a volunteer militia of Albanians from Kosovo set up in 1941 by Italian forces after the successful invasion of Yugoslavia. They served as an auxiliary force for civilian control and protection of villages.

Jelena Lazarević, also known, by marriages, as Jelena Balšić Hranić or Jelena Balšić or Jelena Kosača, was a medieval Serbian princess, daughter of Prince Lazar of Serbia and Princess Milica Nemanjic. She had a very strong personality and significantly influenced the way her husbands, first Đurađ II Balšić and second Sandalj Hranić Kosača, and her son Balša III governed their realms. Jelena encouraged them to resist Venetian encroachment on territory belonging to Zeta, the medieval Serbian state ruled by Đurađ II and then by Balša III after Đurađ II's death. She is also known as a writer in epistolary literature, particularly her correspondence with Nikon of Jerusalem, a monk in the Gorica monastery on Lake Skadar (Montenegro). Her three epistles are part of the Gorički zbornik, a medieval manuscript collection.

The First Scutari War was an armed conflict in 1405–1412 between Zeta and the Venetian Republic over Scutari and other former possessions of Zeta captured by Venice.

Elena Yuryevna Guskova is a Russian historian and member of the Serbian Academy of Science and Arts.

The Brussels Agreement, formally the First Agreement of Principles Governing the Normalisation of Relations, was made between the governments of Serbia and Kosovo on the normalization of their relations. It was negotiated and concluded, although not signed by either party, in Brussels under the auspices of the European Union. The negotiations were led by Serbian Prime Minister Ivica Dačić and Kosovo Prime Minister Hashim Thaçi, and mediated by EU High Representative Catherine Ashton. The agreement was concluded on 19 April 2013. The government of Serbia does not recognize Kosovo as a sovereign state, but began normalizing relations with the government of Kosovo nonetheless, in accordance with the Brussels Agreement. The term normalization of relations remains vague and thus largely problematic.

Dušan Mugoša, nicknamed Duć (Дућ), was a Yugoslav Partisan. He and Miladin Popović were the Yugoslav delegates that helped unite the Albanian communist groups in 1941. The two had been sent to Albania on the directive of the Central Committee of the Communist Party of Yugoslavia, chosen for their revolutionary experience and political knowledge, to be available to the Albanian communists; they were the most active regarding Yugoslav–Albanian alliance. Mugoša and Popović were members of the Regional Committee KPJ of Kosmet. In October 1941, OK KPJ Kosmet representatives Boro Vukmirović, Dušan Mugoša, Pavle Jovićević and Ali Shukriu met with Albanian communist delegation made up by Koço Tashko, Xhevdet Doda and Elhami Nimani in Vitomirica. After having persuaded the disunited Albanian communists to pursue a common fight for "liberation from capitalistic exploitations and Imperial slavery", the work culminated in the meeting of 8 November 1941, with over twenty representatives, that ended in the official establishment of the Albanian Communist Party. While in Tirana, after the freeing of Popović, Krsto Filipović and others from prison camps, the OK KPJ Kosmet decided that Mugoša and Popović stay in Albania. Boro Vukmirović requested that Mugoša be returned to Kosovo. On 25 May 1942, Mugoša began his trip crossing Montenegro, joining up with Todor Vojvodić and Spasoje Đaković in Andrijevica. As the secretary of OK KPJ of Kosmet, he announced the annexation of Kosovo and Metohija to Serbia. He left Albania on 12 April 1944. The three most influential in the decision of uniting Vojvodina and Kosovo and Metohija to NR Serbia were Jovan Veselinov, Dušan Mugoša, and Mehmed Hoxha, who represented the provinces on the extraordinary session of the Anti-Fascist Council of the National Liberation of Serbia on 6 April 1945.

The Serb Uprising of 1737–39 broke out following Austria's defeats against the Ottomans, when the Austrian Emperor issued proclamations that the Christians in the Balkans rise against the Ottoman Empire. The Austrian Emperor called on the Serbs, who were ready to revolt, on 15 June 1737, and stressed that they would fight in an alliance with Russia against a common enemy. The Serbs organized themselves under Serbian Patriarch Arsenije IV. The uprising had a wide geographical extent, from Belgrade to eastern Bosnia and Herzegovina, Montenegro and the Šar Mountain. The Albanian Klimenti tribe also joined the uprising. The failed war prompted Serbs, mostly from Herzegovina, Sandžak, Metohija and Montenegro, to flee under the leadership of Arsenije IV from the Ottoman territories into the Habsburg Monarchy.

Spiridon was the Patriarch of the Serbian Patriarchate of Peć from 1380 to 1389. He held office during the reign of Prince Lazar, who was recognized by the Serbian Church as the legitimate ruler of the Serbian lands, and with whom he closely cooperated. 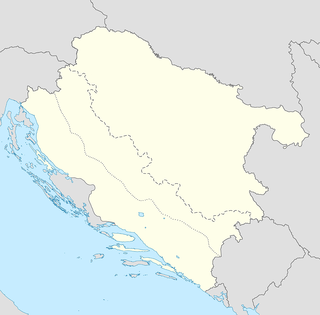 Andrijana Avramov is a politician in Serbia. She has served in the National Assembly of Serbia since 22 January 2019 as a member of the Serbian Progressive Party.

Abdulah "Avdo" Sumbul was Serb Muslim literature journal editor and national activist in Austrian annexed Bosnia and Herzegovina. Sumbul belonged to a group of Serb Muslims who were targeted as enemies by Austria Hungary and persecuted because of their ethnicity. He died in Austro-Hungarian concentration camp in Arad.

Miloš Jovanović is a Serbian politician, lawyer, and a political scientist. He is the president of the Democratic Party of Serbia, and a docent at the Faculty of Law, University of Belgrade.He is also Democratic Party's Candidate for 2022 Serbian general election.