Soğanlı railway station is a freight station near the village of Soğanlı in the Kars Province of Turkey. 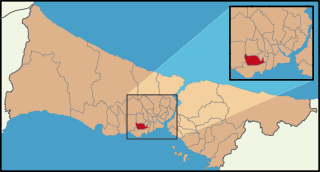 Bahçelievler is a large middle class residential suburb of Istanbul, Turkey, on the European side of the city. It is accessible from the D.100 that runs from the Istanbul airport to the Asian side of the city, covers 5% of Istanbul's land area and is home to over 570,000 people. Bahçelievler is the northern neighbour of Bakırköy, with a similar area.

Sarıkamış is a town and a district of Kars Province in the Eastern Anatolia region of Turkey. Its population was 17,860 in 2010. The town sits in a valley and is surrounded by mountains, many of which are covered with pine forests. It has a subalpine climate, with average of 7–8 ft/2.1m-2.4m of snowfall; it has very long winters and short, dry summers. In recent years Sarıkamış has developed as a winter skiing resort, with one of the world's longest tracks.

The 1993 Bayburt Üzengili avalanche occurred on January 18, 1993, at around 07:45 local time in Üzengili, a village of Bayburt Province in northeastern Turkey. It killed 59 people and injured 21, destroying 72 houses.

Soğanlı, Ardanuç is a village in the District of Ardanuç, Artvin Province, Turkey. As of 2010 it had a population of 116 people.

Soğanlı is a village in the District of Sason, Batman Province, Turkey. As of 2011 it had a population of 143 people.

The Caucasus Greeks, sometimes known as the Greeks of Transcaucasia and Russian Asia Minor, are the historically Greek-speaking peoples of the North Caucasus and Transcaucasia in what is now southwestern Russia, Georgia, and northeastern Turkey. These specifically include the Pontic Greeks, though they today span a much wider region including the Russian north Caucasus, and the former Russian Caucasus provinces of Batum Oblast' and Kars Oblast', now in north-eastern Turkey and Adjara in Georgia.

Events from the year 1913 in Russia

D.915 is a north-to-south state road in northeastern Turkey. The 179 km-long (111 mi) road starts at Of, Trabzon on the coast of the Black Sea branching from D.010 and ends in Aşkale, Erzurum joining D.100 running in a high-elevation mountainous terrain. The route is composed of two parts crossed and overlapped by D.050 on a length of 13 km (8.1 mi) north of Bayburt. The northern part, between Of and Bayburt is 107 km (66 mi) long, and the southern part, between Bayburt and Aşkale is 72 km (45 mi) The northern section is considered one of the most dangerous routes in the world.

The men's freestyle lightweight competition at the 1936 Summer Olympics in Berlin took place from 2 August to 4 August at the Deutschlandhalle. Nations were limited to one competitor. This weight class was limited to wrestlers weighing up to 66kg.

Soğanlı Valley is located in Yeşilhisar district, Kayseri Province, Turkey, in the southeastern part of the region of Cappadocia. The valley contains several rock-cut churches and other rock-cut buildings, carved from the soft tuff stone of the Cappadocian landscape.

Soandos was a town of ancient Cappadocia, inhabited during Roman and Byzantine times.

Soğanlı is a village in the Burdur district of Burdur Province in Turkey.

Soğanlı may refer to the following places in Turkey:

Soğanlı is a village in the Sur District of Diyarbakır Province in Turkey.