Soběslav I, Duke of Bohemia 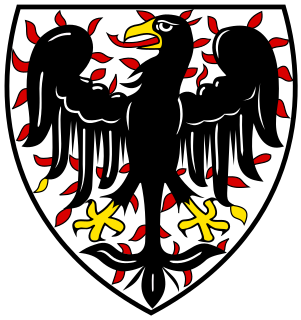 VratislausII, the son of Bretislaus I and Judith of Schweinfurt, was the first King of Bohemia as of 15 June 1085, his royal title granted as a lifetime honorific from Holy Roman Emperor Henry IV that did not establish a hereditary monarchy. Before his elevation to the royal dignity, Vratislaus had ruled Bohemia as duke since 1061.

Świętosława of Poland was the third wife of Duke Vratislaus II of Bohemia and the first Queen of Bohemia as of 1085.

Soběslav is first documented about 1107, when he and his elder brother Duke Bořivoj II were expelled by their Přemyslid relative Svatopluk of Olomouc and fled to the court of their maternal cousin Duke Bolesław III Wrymouth of Poland. After Svatopluk was assassinated during the Battle of Głogów in 1109, Bořivoj's attempts to regain the Bohemian throne failed. In the following fratricidal war that followed the battle, Bořivoj's younger brother Vladislaus I prevailed, backed by King Henry V of Germany. Later the brothers reconciled and Soběslav was vested with rule at Brno and Znojmo in Moravia from 1115 until 1123, when tensions between the brothers rose again and Soběslav was once more expelled.

Bořivoj II was the Duke of Bohemia from 25 December 1100 until May 1107 and from December 1117 until 16 August 1120. He was the younger half-brother and successor of Bretislaus II. His father was Vratislav II of Bohemia, his mother Świętosława of Poland.

Svatopluk the Lion was Duke of Bohemia from 1107 until his assassination in 1109. His rule was overshadowed by the fierce conflict around the Bohemian throne in the 12th century.

Bolesław III Wrymouth, was a Duke of Lesser Poland, Silesia and Sandomierz between 1102 and 1107 and over the whole Poland between 1107 and 1138. He was the only child of Prince Władysław I Herman and his first wife Judith, daughter of Vratislaus II of Bohemia.

Nevertheless, as the last surviving son of Vratislaus II, he succeeded to the ducal throne after Duke Vladislaus' death in 1125. From the beginning, his rule was contested by Otto II the Black, the younger brother of Svatopluk, who gained support not only from Vladislaus's widow Richeza of Berg, but also from King Lothair III of Germany. Soběslav therefore was an adversary of the German monarchy throughout his reign and began by using the divisiveness of the 1125 election of King Lothair against rival Duke Frederick II of Swabia to further Bohemian independence. 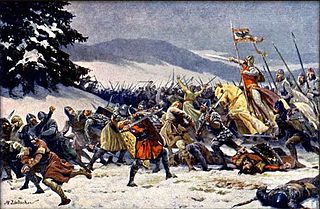 Otto II the Black, a member of the Přemyslid dynasty, ruled as a Moravian prince in Olomouc from 1107 and in Brno from 1123 until his death.

The election of a Holy Roman Emperor was generally a two-stage process whereby, from at least the 13th century, the King of the Romans was elected by a small body of the greatest princes of the Empire, the prince-electors. This was then followed shortly thereafter by his coronation as Emperor, an appointment that was normally for life. Until 1530, emperors were crowned by the Pope. In 1356, the Emperor Charles IV promulgated the Golden Bull, which became the fundamental law by which all future kings and emperors were elected.

When Soběslav decided to remove Otto II from Olomouc, the despoiled prince recoursed to the German king. Lothair III declared that no one could succeed to the Bohemian throne without Imperial investiture and proceeded to invade on behalf of Otto II. This, however, was dangerous to the interests of the local nobility, and they rallied around Soběslav. On 18 February 1126, the German and Moravian troops under Lothair met the Bohemian forces at the Battle of Chlumec, a frontier fortress at the border with the March of Meissen. Soběslav routed and captured King Lothair, while Otto II was killed in battle. However, the relationship between the two countries returned to the former vassal-suzerain relationship, as King Lothair was released on condition of Soběslav's investiture with Bohemia.

A vassal is a person regarded as having a mutual obligation to a lord or monarch, in the context of the feudal system in medieval Europe. The obligations often included military support by knights in exchange for certain privileges, usually including land held as a tenant or fief. The term is applied to similar arrangements in other feudal societies.

Throughout his reign, Soběslav continued to possess the Olomouc duchy, but his rule in Bohemia was again undermined by his nephew Bretislaus, son of Soběslav's eldest brother Duke Bretislaus II (d. 1100). Young Bretislaus referred to the principle of agnatic seniority and had the support of the Moravian dukes Conrad II of Znojmo and Vratislaus II of Brno, as well as of the church party under Bishop Meinhard of Prague. In June 1130, the conspiracy was discovered and thwarted with much bloodshed. The dukes survived and continued to rule, but Bretislaus was blinded. Upon the accession of his brother-in-law King Bela II of Hungary in 1131, he became entangled in an armed conflict with Duke Bolesław III of Poland, who supported Bela's rival Boris Kalamanos.

Agnatic seniority is a patrilineal principle of inheritance where the order of succession to the throne prefers the monarch's younger brother over the monarch's own sons. A monarch's children succeed only after the males of the elder generation have all been exhausted. Agnatic seniority essentially excludes females of the dynasty and their descendants from the succession. Contrast agnatic primogeniture, where the king's sons stand higher in succession than his brothers.

Conrad III of Hohenstaufen, elected King of the Romans in 1138, tried to amend relations between the thrones of Bohemia and Germany. At the Reichstag of Bamberg in the same year, he gave Soběslav the hereditary dignity of the archcupbearer of the Holy Roman Empire and the promise to vest his eldest son Vladislaus with Bohemia upon his death. The duke's reign saw the foundation of many new German colonies in Czech lands in the course of the Ostsiedlung (German eastward expansion}.

Conrad III was the first King of Germany of the Hohenstaufen dynasty. He was the son of Duke Frederick I of Swabia and Agnes, a daughter of the Salian Emperor Henry IV. 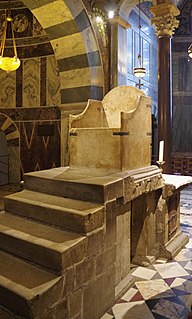 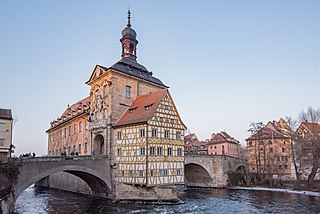 Bamberg is a town in Upper Franconia, Germany, on the river Regnitz close to its confluence with the river Main. A large part of the town has been a UNESCO World Heritage Site since 1993.

Soběslav died on 14 February 1140 at Hostinné Castle. The succession intended for his son failed, as the Bohemian estates raised his nephew Vladislaus II, the son of his elder brother and predecessor Duke Vladislaus, to the ducal dignity with the approval of Conrad III.

The Duchy of Bohemia, also later referred to in english as the Czech Duchy, was a monarchy and a principality of the Holy Roman Empire in Central Europe during the Early and High Middle Ages. It was formed around 870 by Czechs as part of the Great Moravian realm. The Bohemian lands separated from disintegrating Moravia after Duke Spytihněv swore fidelity to the East Frankish king Arnulf in 895. 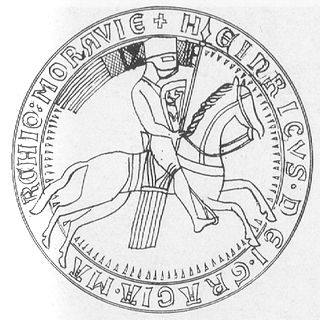 Vladislaus Henry, a member of the Přemyslid dynasty, was elected Duke of Bohemia in 1197 and Margrave of Moravia from 1197 until his death. He only served as duke during the year 1197 and was indeed the last ruler of Bohemia to hold that title. It was his brother Ottokar I, whose forces overthrew him, who finally achieved the elevation of the Duchy of Bohemia to the status of a kingdom starting in 1198. 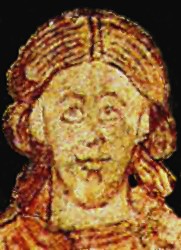 Conrad II Otto, a member of Přemyslid dynasty, was the first Margrave of Moravia from 1182 to 1189 and Duke of Bohemia from 1189 until his death.

Judith of Bohemia, also known as Judith Přemyslid, was a Bohemian princess of the Přemyslid dynasty, and Duchess of Poland by marriage.

The Battle of Chlumec was the culmination of a 12th-century war of succession in the Duchy of Bohemia. It occurred on 18 February 1126 in the vicinity of the village of Chlumec near Chabařovice on the southern slopes of the Eastern Ore Mountains. The Bohemian forces led by Duke Soběslav I defeated an Imperial contingent of troops under King Lothair III of Germany and his Moravian ally Duke Otto II the Black.

Luitpold of Znojmo, a member of the Přemyslid dynasty, ruled as Moravian duke of Znojmo for twenty years - from 1092 until his death.