In 1927, the company split into a Belgian (Société Anglo-Franco-Belge, SAFB) and a French company (Société Franco-Belge).

The Franco-Belge (based in Raismes) was acquired by Alstom in 1982, as of 2012 the factory Alstom Petite-Forêt, Valenciennes operates as an Alstom subsidiary, specialising in metros, trams, and double deck trains, A test track Centre d'Essais Ferroviaire is located west of the Raismes factory.

In 1881, the plant in Brussels was closed and the factory’s equipment was transferred, reducing pollution and other inconveniences caused to the populace of Brussels. [5] [n 3]

A new company, the Société Anonyme Franco-Belge pour la Construction de Machines et de Matériel de Chemins de Fer, was created in 1881, [n 4] including all the assets of the 'Compagnie Belge' (representing 60% of the share capital); the company was capitalised to 8 million francs, the Banque Franco-Egyptienne invested in the new enterprise. In 1882 a new factory was established in Raismes in the north of France, allowing the company to circumvent protectionism in the French market; initially the factory at Raismes in France assembled machines using components manufactured across the border in Belgium. All types of railway rolling stock were built by the company. [5] [7] [9] [10] Charles Evrard died in 1896. [11]

In 1911, the company was renamed Société Franco Belge de Matérial de Chemins de Fer. [5] The company manufactured a wide variety of rolling stock (locomotives, carriages, specialised freight wagons) for clients, including the Belgian railways, private French railways, as well as exporting to Spain, Portugal, and other European countries; China, Turkey, and Indochina; as well as to African and South American countries. [5] [12]

Up to 1914, the company board was dominated by Belgians; after 1914, the company became majority owned by French interests, mainly from Paris. [10] [13] At this time the company had a capacity of around 50 locomotives and over 1,500 carriages and wagons per year; during German occupation during World War I, the plant in Raismes was ordered to carry out repair work, but this was resisted by the plant management - the factory was used under occupation as a sawmill. [14]

Post World War I, the French and Belgian activities were separated into independent companies in 1927 with the Croyere site forming the company "Société Anglo-Franco-Belge" (SAFB or AFB), [n 5] which received English investment and specialised in equipment for metal and wooden fabrications for transportation equipment. [15] The French operations of the company remained as "Franco-Belge".

In 1939, SAFB two acquired two metal working factories were absorbed, in Seneffe and Godarville (Chapelle-lez-Herlaimont), both in Hainaut, Belgium. [n 5] During occupation, the company manufactured over 100 locomotives for the Deutsche Reichsbahn, as well as carrying out repair work. [15] The company director Gilbert Bostsarron became involved in the French resistance network, and arranged allied attacks on the factory; his network was discovered by axis forces resulting in his being arrested and shot in 1944. [16]

Post war the company experienced financial problems, in part due to loss of overseas export customers to American companies. [17] In the 1950s, the company manufactured Electro-Motive Diesel engined diesel locomotives for the railways of Belgium (NMBS/SNCB classes 52, 53, 54, [18] and Luxembourg (CFL class 800 and class 1600). [19] The company also supplied the Israel Railways with its first diesel locomotives in 1952 with an EMD-powered Bo'Bo' design. [20]

In 1964, the company merged with the road and rail vehicle manufacturing company S.A. des Ateliers Germain based in Monceau-sur-Sambre to form the Etablissements Germain-Anglo. [17]

By 1967, the new company was on the verge of collapse with an empty order book—the staff were given notice of the closure which instigated a strike and sit-in at the factory. The situation became one of national interest, with the workers receiving support from trade unions across the country; the prime minister, Paul Vanden Boeynants, visited the factory to seek a resolution. On 1 June 1967, the workers returned to work, after several mitigation measures had been instigated, including short term transfer of staff to other rolling stock manufacturing companies, and large orders given to the metal fabrication plant. Despite this, in February 1968, the company Germain-Anglo ceased operation. [21] [22]

Amongst other production in the 1930s, the Franco-Belge in Raismes manufactured Beyer Peacock designed 4-6-2+2-6-4 high speed (82 mph (132 km/h) achieved) 'Garratt' locomotives for Algeria, [24] and also carriages for an imperial train built for Emperor Haile Selassie of Ethiopia. [25] The association as sub-contractor to Beyer Peacock continued to the 1950s. [26] Over 80 Indian Railways WG class 2-8-2 locomotives were produced in the early 1950s before production capacity at the Chittaranjan Locomotive Works, India, was built up. [27]

In 1982, the company, then known as Soferval-franco-belge (Société ferroviaire du Valenciennes), was acquired by Alstom after a period of poor management and financial problems. [30]

At the beginning of the 21st century, the plant’s future was uncertain; by 2009, the situation had reversed — the factory had contracts for production till 2016, and employed 1350 people. Contracts included metros and trains for RATP and RER (Paris), obtained as part of consortia including Bombardier Transportation. The RER contract was worth €917 million, with a value to Alstom of €640 million. Within the Alstom group, the plant specialised in the design and production of metro trains, trams, and double-decker trains. [36]

In late 2015 the factory was allotted the construction of 90 Bmx driving motor vehicles as part of a €1.3 billion contract awarded to an Alstom/Bombardier consortium for 445 M7 doubledeck passenger vehicles from SNCB. [37]

The Chemins de Fer du Nord, often referred to simply as the Nord company, was a rail transport company created in September 1845, in Paris, France. It was owned by among others de Rothschild Frères of France, N M Rothschild & Sons of London, England, Hottinger, Laffitte and Blount. Baron James de Rothschild served as the company's first president from its inception until his death in 1868. 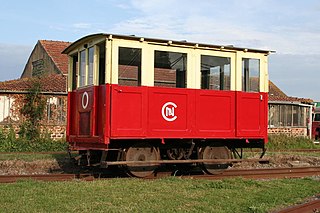 Établissements Billard was a French railway rolling stock construction company founded in 1920 and based in Tours. It specialised in light railbuses and metre gauge and narrow gauge rolling stock. The business ceased trading in 1956 and later became Socofer.

Ernest Goüin was a French civil engineer and industrialist.

The Tramway de Pithiviers à Toury (TPT) was a 600 mm narrow gauge railway in the Loiret department of France. The system had a total extent of 80 kilometres (50 mi) 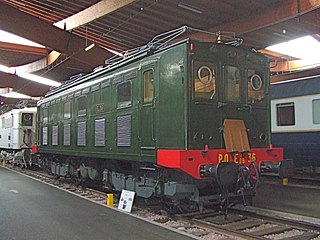 The SNCF locomotives BB 1 to BB 80 were a class of 1500 V DC 4-axle electric locomotives originally built for the Chemin de Fer de Paris à Orléans in the 1920s. The locomotives were originally numbered E.1 to E.80 prior to the Paris and Orleans railway company's incorporation into the Société Nationale des Chemins de fer Français (SNCF) in 1937.

The Société de Construction des Batignolles was a civil engineering company of France created in 1871 as a public limited company from the 1846 limited partnership of Ernest Gouin et Cie.. Initially founded to construct locomotives, the company produced the first iron bridge in France, and moved away from mechanical to civil engineering projects in France, North Africa, Europe, and in East Asia and South America.

The Compagnie française de matériel de chemin de fer (CFMCF) was a French manufacturer of rail equipment, headquartered in Ivry-sur-Seine, with a factory in Maubeuge.

The Ateliers Germain was a Belgian engineering manufacturing company based in Monceau-sur-Sambre near Charleroi. The company manufactured motorcars under license in the early 20th century until the First World War, after which is concentrated on rail vehicle manufacture.

The NMBS/SNCB Type 12 was a class of 4-4-2 steam locomotives built in 1938–1939 for the fast lightweight Ostend boat trains operated by the National Railway Company of Belgium.

The Société J.F Cail & Cie was founded in Paris on 6 June 1850 by Jean-François Cail (1804-1871). It was a French industrial company during the Second French Empire, whose activity was principally in sugar mills, railway locomotives and metal bridges.