The beginnings of settlement in this area date back to 6th century AD. The Sokołów area belongs to that part of Podlachia, which, due to its location, was a typical settler outpost. This area in early Medieval time was a scene of the feudal fights between the Polish and Ruthenian states, the Teutonic Knights, Yotvingians and Lithuanians. Political history of this land strongly influenced its cultural development and progress of colonisation.

Archaeological research to determinate the cultural and ethnic structure of the settlements discovered numerous archaeological sites from the early Middle Ages in the area, which allowed scientists to accurately reproduce the phases of colonisation process and the character of defensive and residential building structures of the settlements. The archaeologists found evidence of settlements in the area dating from 6th and 7th centuries. Ceramics, iron fittings, buckles, beads, staples and numerous items of burial equipment testify about the culture, customs and rituals celebrated to honour the dead. The study confirmed that in a place of old Russian and Polish settlements in the Cetynia river valley, as a result of gradual colonisation, new settlement at Sokołów was established. [3]

Sokołów Podlaski received city rights in 1424 from the Grand Duke of Lithuania Witold. [4] In 1508 Stanisław Kiszka became the new owner of the town. [5] Administratively Sokołów was part of the Podlaskie Voivodeship of the Lesser Poland Province of the Polish Crown. In 1580 King Stephen Báthory visited Sokołów. [5] Sokołów belonged to Kiszka until 1592, when it was passed to the Radziwiłł family. For Sokołów it was a time of the greatest prosperity in its history, uninterrupted until the Swedish invasion in the middle of the 17th century. During the war with Sweden the city was significantly damaged. In 1657 Rakoczy's army burned down the town together with surrounding farms. During the Reformation, the city was one of the strongest centers of Arianism in Podlachia. [5]

In 1668 Jan Krasiński became the new owner of the town. After the second half of the 18th century the town belonged to the Ogiński family. Under their rule craftsmanship quickly developed in Sokołów. Michał Kleofas Ogiński brought French craftsmen who started the production of silk scarves, hats, rugs, linen and Slutsk sashes. [3]

After the Third Partition of Poland Sokołów fell under Austrian rule, and after the Polish-Austrian war, in 1809, became part of the Polish Duchy of Warsaw. In 1815 it became part of Congress Poland, later on forcibly annexed by Russia. In 1833 the town was purchased from Michał Kleofas Ogiński by local landowner Karol Kobyloński, who 10 years later sold it to Elżbieta Hirschman. The new owner in 1845 established the sugar factory "Elżbietów" in Przeździatka (today on the western outskirts of Sokołów Podlaski) and in 1890, the factory employed 600 workers. [3] The sugar factory played an important role for the development of the city and local agriculture.

During the January Insurrection local priest Stanisław Brzóska became a famous leader of the Polish resistance against Russian rule. He was arrested, sentenced by the tsarist authorities to death by hanging, and executed in the town centre on 23 May 1865. In 1925 a granite monument was erected as a memorial at the site of Brzóska's execution. [5]

In 1867 Sokołów became the property of the state and the district office was established there. [6] In 1887, after the construction of the railway line, the city became an important communication link. Between 1845–1890 the population of the town doubled, mostly thanks to immigrants, the majority of which were Jews, who, being artisans, craftsmen and merchants, made a great contribution to the further development of the town. During this period new factories were opened in addition to the sugar factory. [5] In 1915, during World War I, the Germans entered the city, ending the period of Russian rule, and the three-year period of German occupation began. [5] Sokołów became part of Poland again in 1918, after the country declared independence.

During World War II Sokołów suffered heavy losses. As a result of the war 30% of residential and 70% of official buildings were destroyed and the population was drastically reduced. With the beginning of German occupation, many Jews fled. For those who left in August 1941 German authorities created a ghetto, which existed until the end of September 1942. A significant number of the Jewish population were killed in the ghetto and others transported to the Treblinka extermination camp. The liberation of the city took place on 8 August 1944.

Between 1951 and 1974 the electromechanical, chemical and furniture industries developed significantly. [5] In 1975 a meat processing company was established, [5] which over time, as Sokołów, became one of the largest companies in the Polish meat industry. 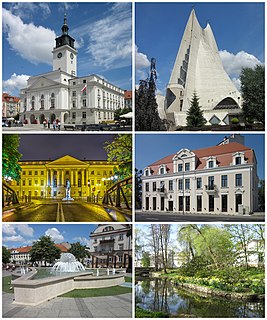 Kalisz ( is a city in central Poland and the second-largest city in the Greater Poland Voivodeship with 100,246 inhabitants. It is the capital city of the Kalisz Region. Situated on the Prosna river in the southeastern part of Greater Poland, the city forms a conurbation with the nearby towns of Ostrów Wielkopolski and Nowe Skalmierzyce.

Jēkabpils is a city in southeastern Latvia roughly halfway between Riga and Daugavpils and spanning the Daugava River. Historic Jēkabpils lies on the left bank, in Selonia while historic Krustpils lies on the right bank, in Latgale. The two cities were united during Soviet rule in 1962 under the Jēkabpils name, but retain their distinct regional character. 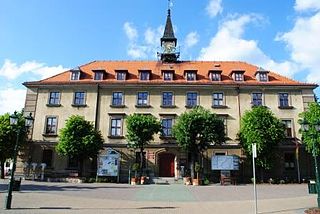 Swarzędz is a town in west-central Poland with 29,766 inhabitants. It is the seat of a mixed urban-rural commune called Gmina Swarzędz with 40,166 inhabitants. The town is situated in the Poznań metropolitan area, in the Greater Poland Voivodeship, having previously been in Poznań Voivodeship (1975–1998). 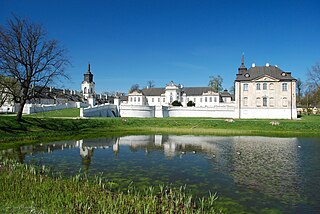 Radzyń Podlaskipronounced [ˈrad͡zɨɲ pɔdˈlaskʲi] is a town in eastern Poland, about 60 km north of Lublin, with 15,808 inhabitants (2017). Situated in the Lublin Voivodeship since 1999, previously it was part of the Biała Podlaska Voivodeship (1975–1998). It is the capital of Radzyń Podlaski County, and historically belongs to the region of Lesser Poland. The town was founded in 1468, and its most important landmark is the rococo Potocki Palace.

Bielsk Podlaski(listen) is a town in northeastern Poland, in the Bielsk County in the Podlaskie Voivodeship. It is one of the historically most important towns in the region of Podlachia.

Hajnówka is a town and a powiat seat in north-eastern Poland with 21,442 inhabitants (2014). It is the capital of Hajnówka County. The town is also notable for its proximity to the Białowieża Forest, the biggest primaeval forest in Europe. Through Hajnówka flows the river Leśna Prawa. It is one of the centres of Orthodox faith and a notable centre of Belarusian culture in Poland. Belarusians comprised 26.4% of the town's population in 2002.

Grajewo is a town in north-eastern Poland with 21,499 inhabitants (2016). It is situated in the Podlaskie Voivodeship ; previously, it was in Łomża Voivodeship (1975–1998). It is the capital of Grajewo County. It is located within the historic region of Masovia, near the border with Podlachia and Masuria. 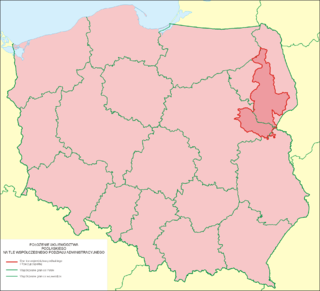 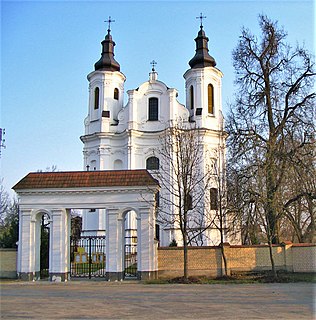 Slonim is a city in Grodno Region, Belarus, capital of the Slonim district. It is located at the junction of the Shchara and Isa rivers, 143 km (89 mi) southeast of Grodno. The population in 2015 was 49,739.

Michał Kleofas Ogiński was a Polish diplomat and politician, Grand Treasurer of Lithuania, and a senator of Tsar Alexander I. He was also a composer of early Romantic music.

Bełżyce(listen) is a town in eastern Poland, in the Lublin Voivodeship, in Lublin County, and about 20 km to the west of the city of Lublin. Bełżyce belongs to Lesser Poland.

Strzelin is a town in Lower Silesian Voivodeship in south-western Poland. It is located on the Oława river, a tributary of the Oder, about 39 kilometres south of the region's capital Wrocław. It is part of the Wrocław metropolitan area.

Stanisław Brzóska was a Polish priest, general, one of leaders of the Polish insurgency and the last partisan of the January Uprising. He commanded the Polish detachment in South Podlasie and northern Lesser Poland, defeating the Russians in many skirmishes. He was captured eventually in April 1865, sentenced to death by the Russians and hanged publicly in Sokołów Podlaski in the presence of a crowd of 10,000 people.

Sokołów County is a unit of territorial administration and local government (powiat) in Masovian Voivodeship, east-central Poland. It came into being on January 1, 1999, as a result of the Polish local government reforms passed in 1998. Its administrative seat and largest town is Sokołów Podlaski, which lies 88 kilometres (55 mi) east of Warsaw. The only other town in the county is Kosów Lacki, lying 23 km (14 mi) north of Sokołów Podlaski.

Prince Michał Kazimierz Ogiński of Oginiec was a Polish nobleman, a political office holder and a military commander in the Grand Duchy of Lithuania, as well as a noted musician and composer.

Guzów is a village in the administrative district of Gmina Wiskitki, within Żyrardów County, Masovian Voivodeship, in east-central Poland. It is approximately 6 kilometres (4 mi) north-west of Wiskitki, 10 km (6 mi) north-west of Żyrardów, and 47 km (29 mi) west of Warsaw. It is the birthplace of statesman and composer, Michal Kleofas Oginski (1765-1833). 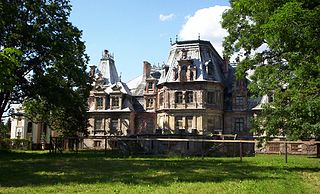 Rietavas Manor is a former Ogiński residential manor in Rietavas, Lithuania. The primary manor building hasn't survived, however many parts of the ensemble have, including the former musicians' dormitory, water tower, park, a few outbuildings, guard house, part of the wall, two gates and the Ogiński Family Chapel, where Bogdan Ogiński and his brother duke Mykolas Ogiński are buried.

Indura is a village in the Grodno District of the Grodno Region of Belarus.