Sokol (Сокол, Russian for "falcon") was a planned high-speed train in Russia. [1] It was to be a successor of the ER200 for use on the Moscow–St. Petersburg mainline, and was designed to operate at a cruising speed of 250 km/h. A prototype was built in 2000 and tested by Russian High Speed Railway Shareholding Co. [2]

The Sokol project was cancelled in 2002. [3] Instead of a Sokol-based design, high speed trainsets (named Sapsan ) based on the Siemens Velaro were procured from Siemens in Germany. [4] The Sapsan trains have been operating on the Moscow–St. Petersburg line since December 2009. 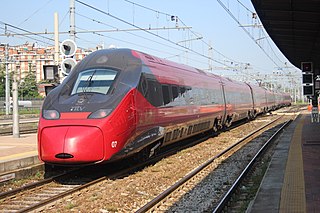 Pendolino is an Italian family of tilting trains used in Italy, Spain, Poland, Portugal, Slovenia, Finland, Russia, the Czech Republic, Slovakia, the UK, Switzerland and China. Based on the design of the Italian ETR 401 and the British Advanced Passenger Train, it was further developed and manufactured by Fiat Ferroviaria, which was taken over by Alstom in 2000.

The Siemens Desiro is a family of diesel or electric multiple unit passenger trains developed by Siemens Mobility, a division of the German Siemens AG conglomerate. The main variants are the Desiro Classic, Desiro ML, Desiro UK and the later Desiro City, Desiro HC and Desiro RUS. The trains are mostly used for commuter and regional services, and their rapid acceleration makes them suitable for services with short distances between stations. The design is flexible, and has become common in many European countries. 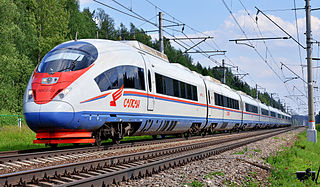 The Saint Petersburg to Moscow railway runs for 649.7 kilometers (403.7 mi) through four oblasts: Leningrad, Novgorod, Tver and Moscow. It is a major traffic artery in the north-west region of Russia, operated by the October Railway subdivision of Russian Railways. 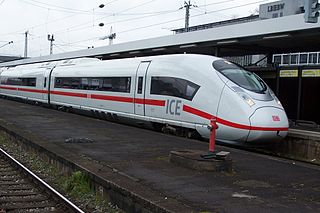 Siemens Velaro is a family of high-speed electric multiple unit trains built by Siemens and used in Germany, Belgium, France, the United Kingdom, the Netherlands, Spain, China, Russia and Turkey. The Velaro is based on the ICE 3M/F high-speed trains manufactured by Siemens for the Deutsche Bahn (DB). The Deutsche Bahn were the first to order Siemens high speed trains; it ordered 13 of these units in 1994, the Nederlandse Spoorwegen (NS) 4 units. The trains were delivered in 1999 for service. The trains were labelled and marketed as the Velaro by their manufacturer, Siemens.

Kursky railway terminal, also known as Moscow Kurskaya railway station, is one of the nine railway terminals in Moscow. It was built in 1896, and renovated in 1938, then a large glass facade and modern roof was added in a 1972 expansion. In 2008, there were plans to completely rebuild or refurbish the station. Kursky station, unlike most Moscow terminals, operates two almost opposite railroad directions from Moscow: one toward Kursk, Russia, after which the station is named, that stretches on into Ukraine, and another toward Nizhniy Novgorod, which is less used by long-distance trains, and is mostly for the high-speed service to Nizhniy. Kursky is connected to the Lengradskiy Line from the other side, enabling long-distance trains from St. Petersburg going on to other cities to pass through Russia's capital. Because of its three directions, its adjacency to the city center, and its connection to three major metro lines, Kursky is one of Moscow's busiest railway stations.

Oy Karelian Trains Ltd is a joint venture agreed on 23 November 2006 between Russian Railways (RZhD) and VR Group to facilitate the operation of international express passenger rail services between Helsinki, Finland, and Saint Petersburg, Russia. Karelian Trains is registered in Helsinki; VR and RZhD both own 50% of the shares. The services are branded as Allegro.

ICE 3, or Intercity-Express 3, is a family of high-speed electric multiple unit trains operated by Deutsche Bahn. It includes classes 403, 406 and 407, which are known as ICE 3, ICE 3M and New ICE 3 respectively. Four multisystem trains, known as ICE International, are owned by Nederlandse Spoorwegen. Based on the ICE 3M/F, Siemens developed its Siemens Velaro train family with versions for Spain, China, Russia, its home country Germany, as well as the United Kingdom and Turkey. 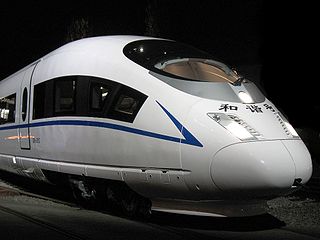 The CRH3 Hexie is a version of the Siemens Velaro high-speed train used in China on the Beijing–Tianjin intercity railway line, Wuhan-Guangzhou Passenger Dedicated Line, Zhengzhou-Xi'an Passenger Dedicated Line and the Shanghai–Nanjing intercity railway. It is capable of service speed of 380 km/h (236 mph) as the very similar Velaro E used in Spain, but, similarly to the Sapsan, it is 300 mm (11.8 in) wider to take advantage of a more generous structure gauge and thus be able to fit in more seats in a 2+3 layout. 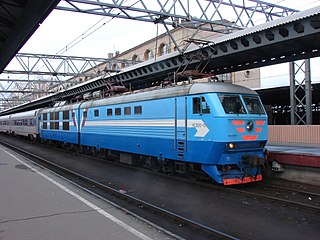 The Nevsky Express is a Russian Railways express train, formerly the fastest on the prominent route between the Leningradsky Rail Terminal in Moscow and the Moskovsky Rail Terminal in Saint Petersburg. The train has a maximum speed of 200 km/h (125 mph) and does not make any intermediate station stops. It consists of a Skoda Chs200 locomotive, 13 passenger cars and a restaurant car. It features 6-person compartments in some cars and airline style seating in other cars. 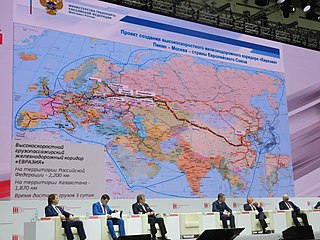 High-speed rail is emerging in Russia as an increasingly popular means of transport, with the travel time from Moscow to Saint Petersburg being twice as fast via high speed rail than driving. 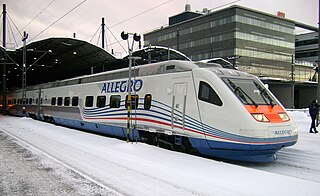 Allegro is a high-speed train service, operating Alstom VR Class Sm6 trains, between Helsinki, Finland, and St. Petersburg, Russia. The service started on 12 December 2010. The aim is to reduce travel time between Helsinki and Saint Petersburg: before Allegro, the journey time was 5½ hours; currently it is 3 hours and 27 minutes over a journey of 407 km and there are plans to bring it down to 3 hours. The name Allegro is a musical term for a quick tempo, thereby suggesting "high speed".

Titran-Express is a company based in Tikhvin in Leningrad Oblast, Russia. Throughout the plants history it has been associated with metal mechanical engineering, and manufacture of components for large-scale transportation equipment such as bogies for rail vehicles, tank tracks or tractor parts. 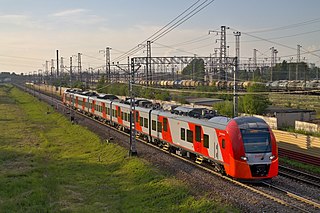 The Lastochka is a German/Russian train. It is a commuter intercity electric multiple unit train used across multiple Russian cities, based on the Siemens Desiro design and manufactured by Siemens and Ural Locomotives. 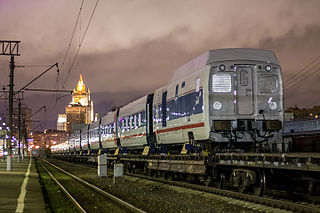 The Strizh is a Russian locomotive-hauled, low-floor, high-speed express train.

Oleg Valentinovich Belozyorov, is a Latvian-born Russian politician and manager. He is serving as president of Russian Railways since August 20, 2015.