Solel Boneh (Hebrew : סולל בונה‎, lit. Paving and Building) is the oldest, and one of the largest, construction and civil engineering companies in Israel.[ citation needed ]

Solel Boneh was founded in 1921 in British-ruled Palestine, during the first conference of the Jewish trade union, the General Histadrut, under the name of Batz (בע"ץ‎), an acronym of Binyan veAvodot Tziburiot (בניין ועבודות ציבוריות‎, lit. Construction and Public Works). Its first project was to pave a road from Tiberias to Samakh, which is now part of Highway 90. The company was founded as a cooperative organisation in the spirit of socialist workers' groups. In 1923 it was declared bankrupt partly due to its supplementing wages to Jewish workers. It was resurrected by the Histadrut and the Zionist Organisation as a company named "Solel Boneh", based on the organisation but managed as a business corporation.[ citation needed ] [1]

Solel Boneh had an integral role in major building activities in Mandate Palestine. Among other projects, the company built Tegart's wall in 1938. It also built the Tegart Forts and prefabricated the buildings for the Tower and stockade campaign. [2] During the Mandate era it built bridges, airfields, bases for the British Army [3] and army projects in Iraq, Egypt, Bahrain and Cyprus. It had branches in Beirut and Damascus. [4] In 1926, it employed 3,000 workers in various public works projects, included 139 women who worked in construction. [5] It had a policy of only employing Jews which was relaxed in 1954. [6]

After statehood was achieved in 1948, Solel Boneh continued to play a major role in Israeli construction projects. [5]

Solel Boneh helped strengthen the Israel Defense Forces during the 1948 Arab-Israeli War, and it built strongholds and systems to supply water, in practice becoming the basis of the first logistics unit in the IDF. [7]

In 1961, shares of Solel Boneh were first traded on the Tel Aviv Stock Exchange.[ citation needed ]

Israeli firms, such as Solel Boneh, were often involved in building projects in Africa during the 1960s and 1970s. One reason Operation Entebbe in 1976 was so well-planned was that the building in which the hostages were being held had been built by Solel Boneh, which still had the blueprints, and supplied them to the Israeli government.[ citation needed ]

During the years 1960-69, Solel Boneh carried out the construction of the Basilica of the Annunciation in Nazareth. [8]

In 1984, a subsidiary, Solel Boneh Building and Infrastructure, was founded under full control of the parent company.[ citation needed ] In 1989, control of Solel Boneh was passed on to the Housing & Construction Holding Company Limited (Shikun U'Binui).[ dubious – discuss ]

In 1996, control of that holding company, including Solel Boneh, was obtained by Ted Arison and after his death in 1999 later it was passed on to his daughter, Shari Arison.[ citation needed ] 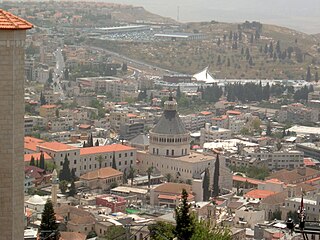 Nazareth is the largest city in the Northern District of Israel. Nazareth is known as "the Arab capital of Israel". In 2019 its population was 77,445. The inhabitants are predominantly Arab citizens of Israel, of whom 69% are Muslim and 30.9% Christian. Nof HaGalil, declared a separate city in June 1974, is built alongside old Nazareth, and had a Jewish population of 40,312 in 2014.

Histadrut, or the General Organization of Workers in Israel, originally, is Israel's national trade union center and represents the majority of Israel's trade unionists.

Bank Hapoalim is one of Israel's largest banks. 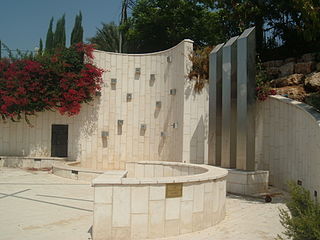 The October 2000 riots, also known as October 2000 events, were a series of protests in Arab cities and towns in northern Israel in October 2000 that turned violent, escalating into rioting by Israeli Arabs throughout Israel, which led to counter-rioting by Israeli Jews and clashes with the Israel Police. During the riots, 13 Arabs - 12 Israeli-Arabs and one Palestinian from the Gaza Strip who had been demonstrating in Israel - were killed by police. One Israeli Jew was also killed when his car was hit by stones thrown by Arab rioters. Most of the Jewish riots took place towards the end, between 7–9 October. 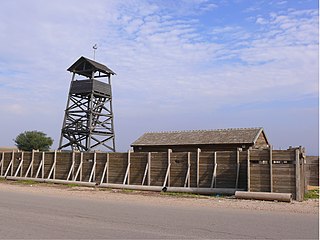 Tower and Stockade was a settlement method used by Zionist settlers in Mandatory Palestine during the 1936–39 Arab Revolt. The establishment of new Jewish settlements was legally restricted by the Mandatory authorities, but the British generally gave their tacit accord to the Tower and Stockade actions as a means of countering the Arab revolt. During the course of the Tower and Stockade campaign, some 57 Jewish settlements including 52 kibbutzim and several moshavim were established throughout the country. The legal base was a Turkish Ottoman law that was in effect during the Mandate period, which stated that no illegal building may be demolished if the roof has been completed. 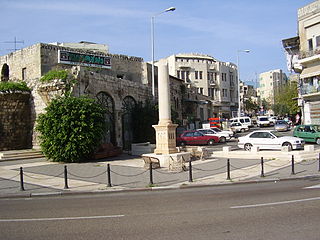 Wadi Salib is a primarily Jewish neighbourhood located in downtown Haifa, Israel, on the lower northeastern slope of Mount Carmel, between the Hadar HaCarmel and the city's historic center and CBD. 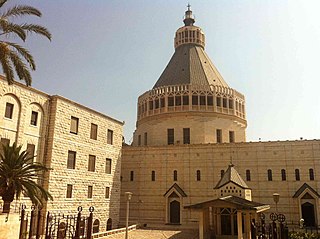 The Church of the Annunciation, sometimes also referred to as the Basilica of the Annunciation, is a Catholic Church in Nazareth, in northern Israel. It was established over the site where the Catholic tradition holds to be the house of Virgin Mary, and where angel Gabriel appeared to her and announced that she would conceive and bear the Son of God, Jesus – an event known as the Annunciation. 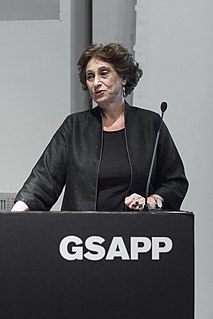 Suad Amiry is an author and architect living in the West Bank city of Ramallah. 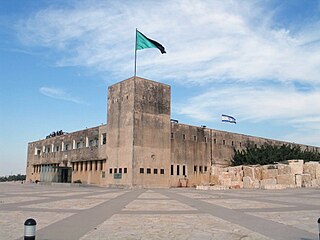 A Tegart fort is a type of militarized police fort constructed throughout Palestine during the British Mandatory period, initiated as a measure against the 1936–1939 Arab Revolt.

The Nabi Yusha fort, renamed Metzudat Koach, is a police fort built by the British Mandate administration during the 1936–39 Arab revolt in Palestine and currently used by the Israel Border Police. The site around the fort contains a stone monument and a new museum, together constituting the Metzudat Koach Memorial, which commemorates 28 Israeli soldiers who died during the 1948 conquest of the strategically important fort. The fort and observation point is located in the Upper Galilee, close to an abandoned Shia shrine of Nabi Yusha. The Hebrew word "ko'ach" (כח) has a double meaning: as a common noun it means "strength", while its numerical value according to gematria is 28, the number of the fallen soldiers.

Berl Repetur was a Zionist activist, Israeli politician and one of the signatories of the Israeli declaration of independence.

Ramot Naftali is a moshav in northern Israel. Located in the Upper Galilee near the Lebanese border, it falls under the jurisdiction of Mevo'ot HaHermon Regional Council. In 2019 it had a population of 546.

Donna Robinson Divine is Morningstar Family Professor in Jewish Studies and Professor of Government at Smith College. She holds a B.A. from Brandeis University, 1963, and a Ph.D. from Columbia University, 1971, in Political Science. Divine is interested in Comparative Politics, Middle East Politics, and Political Theory.

Shikun & Binui ; TASE: SKBN) is one of the largest construction and infrastructure, Real Estate and Energy companies in Israel., it is also an international holding and investment company The company's shares are traded on the Tel Aviv Stock Exchange and are included in the TA-100 Index.

Bialik House was the home of the Hebrew national poet Hayyim Nahman Bialik in the center of Tel Aviv, Israel, and is now used as a museum.

Shraga Goren was an Israeli politician. 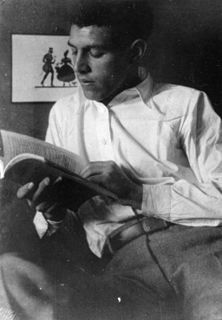 Munio Gitai Weinraub was an Israeli architect, a pioneer of modern architecture and urban and environmental planning in Israel, and one of the most prominent representatives of the Bauhaus heritage in the country. Throughout his 36 years career, Weinraub was responsible for the construction and planning of thousands of housing units, workers' housing units and private homes in and around Haifa. Weinraub took part in the initial planning of the Hebrew University campus in Givat Ram and the Yad Vashem Museum in Jerusalem. From the beginning of his career, Weinraub sought to combine the values of Hannes Meyer's social planning with the meticulous construction art of Ludwig Mies van der Rohe. His works are designed out of deep social sensitivity and are characterized by minimalist geometry, simple and modest presence and efficient functional planning. Inspired by his teacher Mies van der Rohe, Weinraub chose to give up "problems of form" in order to dedicate himself to "problems of construction" and focus on the act of construction itself, the treatment of the material and the processing of the architectural individual.

Caesarstone Ltd., or Caesarstone, is a publicly traded company that engages in the production and marketing of quartz surfaces used for kitchen countertops, vanity tops, flooring, wall cladding and general interior design. The company was founded in 1987 and is traded on the NASDAQ in New York (CSTE). Headquarters are located in Kibbutz Sdot Yam in Israel, and its production facilities are in Israel and the USA. Its products are sold in approximately 50 countries around the world through a network of 6 subsidiaries and numerous distributors.

Israeli–Palestinian economic peace efforts refers to efforts to promote joint economic projects between Israelis and Palestinians, as a pathway to reach peace between the two groups.

Kinneret Farm or Kinneret Courtyard was an experimental training farm established in 1908 in Ottoman Palestine by the Palestine Bureau of the Zionist Organisation (ZO) led by Arthur Ruppin, at the same time as, and next to Moshavat Kinneret, a moshava-type village. The farm stood in close proximity to the shore of the Sea of Galilee. Until the early 1920s the farm was a hothouse and catalyst for social and economical innovation, which helped mold and create several essential institutions and infrastructure elements of the Yishuv, perpetuated in the State of Israel after 1948: communal settlement forms, women's rights movement, cooperative enterprises, a workers' savings and support bank, public health care system, a national paramilitary organisation. From 1949 on, after the establishment of the State of Israel, the courtyard served different lesser military and civilian purposes, was abandoned, then restored as a heritage site, and it 2007 it was opened as a museum and educational centre.