Her acting career began in the theatre with Compagnie Timothee Laine and with the Theater Labor Warschau. [1] She had her first experiences with film as an assistant of Jacques Rozier.

Her debut as a film actress was in Wings of Desire (1987), by Wim Wenders. She learned circus acrobatics for the role in only eight weeks, [2] and performed without using a stunt double. She co-authored Until the End of the World (1991) with Wenders and travelled around the world with him in search of locations for the project.

Wim Wenders said about Until the End of the World: "Solveig Dommartin and I had written the story of our film together, and we thought that we only had the right to enter into such a sacred area like a person's dreams, if we would bring something into the work that was sacred to ourselves". 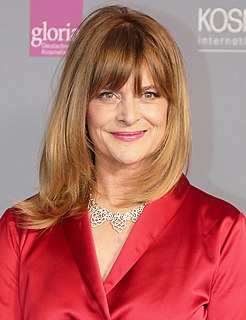 Nastassja Aglaia Kinski is a German actress and former model who has appeared in more than 60 films in Europe and the United States. Her worldwide breakthrough was with Stay as You Are (1978). She then came to global prominence with her Golden Globe Award-winning performance as the title character in the Roman Polanski-directed film Tess (1979). Other notable films in which she acted include the erotic horror film Cat People (1982), the Wim Wenders dramas Paris, Texas (1984) and Faraway, So Close! (1993), and the biographical drama film An American Rhapsody (2001). Kinski is fluent in four languages: German, English, French and Italian. She is the daughter of German actor Klaus Kinski.

Until the End of the World is a 1991 science fiction drama film by German film director Wim Wenders. Set at the turn of the millennium in the shadow of a world-changing catastrophe, the film stars William Hurt and Solveig Dommartin, following their characters as they are pursued across the globe, in a plot involving a device to record memories. 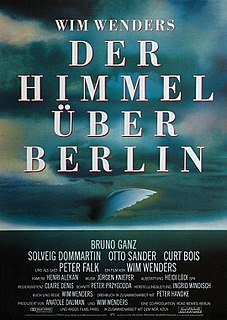 Wings of Desire is a 1987 romantic fantasy film directed by Wim Wenders. The film is about invisible, immortal angels who populate Berlin and listen to the thoughts of its human inhabitants, comforting the distressed. Even though the city is densely populated, many of the people are isolated or estranged from their loved ones. One of the angels, played by Bruno Ganz, falls in love with a beautiful, lonely trapeze artist, played by Solveig Dommartin. The angel chooses to become mortal so that he can experience human sensory pleasures, ranging from enjoying food to touching a loved one, and so that he can discover human love with the trapeze artist. 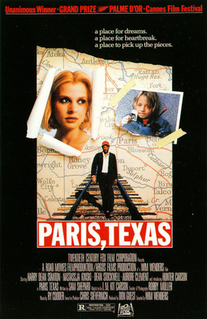 Paris, Texas is a 1984 road movie directed by Wim Wenders and starring Harry Dean Stanton, Dean Stockwell, Nastassja Kinski and Hunter Carson. The screenplay was written by L. M. Kit Carson and playwright Sam Shepard, while the musical score was composed by Ry Cooder. The film is a co-production between companies in France and West Germany, and was shot in the United States by Robby Müller. 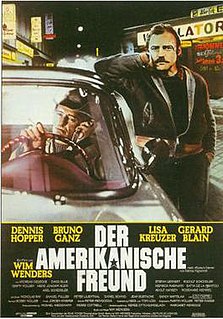 The American Friend is a 1977 neo-noir film by Wim Wenders, adapted from the 1974 novel Ripley's Game by Patricia Highsmith. The film features Dennis Hopper as career criminal Tom Ripley and Bruno Ganz as Jonathan Zimmermann, a terminally ill picture framer whom Ripley coerces into becoming an assassin. The film uses an unusual "natural" language concept: Zimmermann speaks German with his family and his doctor, but English with Ripley and while visiting Paris. 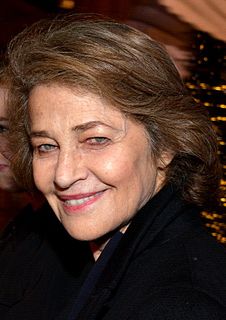 Jeanne Moreau was a French actress, singer, screenwriter, director, and socialite. She made her theatrical debut in 1947, and established herself as one of the leading actresses of the Comédie-Française. Moreau began playing small roles in films in 1949, later achieving prominence with starring roles in Louis Malle's Elevator to the Gallows (1958), Michelangelo Antonioni's La Notte (1961), and François Truffaut's Jules et Jim (1962). Most prolific during the 1960s, Moreau continued to appear in films into her 80s. Orson Welles called her "the greatest actress in the world".

Faraway, So Close! is a 1993 German fantasy film directed by Wim Wenders. The screenplay is by Wenders, Richard Reitinger and Ulrich Zieger. It is a sequel to Wenders' 1987 film Wings of Desire. Actors Otto Sander, Bruno Ganz and Peter Falk reprise their roles as angels who have become human. The film also stars Nastassja Kinski, Willem Dafoe and Heinz Rühmann, in his last film role.

Güntzelstraße is a Berlin U-Bahn station on the line. It is located in the central Wilmersdorf district of the city. The station designed by the BVG architect Rainer G. Rümmler opened on 29 January 1971 with the line's extension from Spichernstraße to Walther-Schreiber-Platz. The station and the adjacent street are named after Karl August Bernhard Güntzel, mayor of Wilmersdorf from 1886 to 1892. 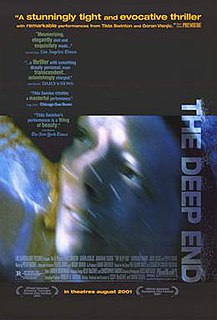 The Deep End is a 2001 American thriller film written and directed by David Siegel and Scott McGehee. It stars Tilda Swinton, Goran Visnjic, Jonathan Tucker and Josh Lucas and was released by Fox Searchlight Pictures. The film was very loosely adapted from the novel The Blank Wall by Elisabeth Sanxay Holding. The film premiered in competition at the Sundance Film Festival where English cinematographer Giles Nuttgens won the Best Cinematography award. 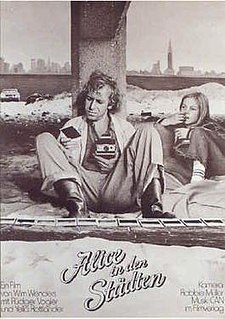 Alice in the Cities is a 1974 German road movie directed by Wim Wenders. It is the first part of Wenders' "Road Movie trilogy", which also includes The Wrong Move (1975) and Kings of the Road (1976). The film is shot in black and white by Robby Müller with several long scenes without dialogue. The film's theme foreshadows Wenders' later film Paris, Texas. 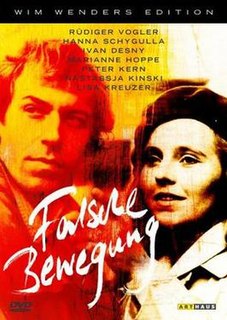 The Wrong Move is a 1975 German road movie directed by Wim Wenders. This was the second part of Wenders' "Road Movie trilogy" which included Alice in the Cities (1974) and Kings of the Road (1976).

The Road Movie trilogy is a series of three road movies directed by German film director Wim Wenders in the mid-1970s: Alice in the Cities (1974), The Wrong Move (1975), and Kings of the Road (1976). All three films were shot by cinematographer Robby Müller and mostly take place in West Germany. The centerpiece of the trilogy, The Wrong Move, was shot in colour whereas Alice in the Cities was in black and white 16 mm, and Kings of the Road was in black and white 35 mm film.

"The Carny" is a song by Nick Cave and the Bad Seeds appearing on their fourth studio album Your Funeral... My Trial. It was written by Nick Cave and was recorded in August 1986 at Hansa Tonstudio and Strongroom.