Som Nath Sadhu (1935–1982) was an Indian theatre personality known for his contributions to Kashmiri theatre as an actor, playwright [1] and director. [2]

He was born in 1935 to the notable playwright, Prem Nath Pardase, [3] and started his career by joining Radio Kashmir in 1955. [2] [4] There he had the opportunity to work with another Kashmiri playwright, Pushkar Bhan, with whom he co-wrote several plays for the radio. [5] [3] Janaki, Lwakutboy (Younger Brother), Zi rang (Two Colours), Shama dan (Candlestick), Avihin (Vortex) and Shararat (Mischief) are among his notable works. [6] He also acted in two Kashmiri films, Shayar-e-Kashmir Mahjoor and Mainz Raat. [7]

Literature of Kashmir has a long history, the oldest texts having been composed in the Sanskrit language. Early names include Patanjali, the author of the Mahabhashya commentary on Pāṇini's grammar, suggested by some to have been the same to write the Hindu treatise known as the Yogasutra, and Dridhbala, who revised the Charaka Samhita of Ayurveda.

Pushkar Bhan was a radio actor and script writer from Kashmir. 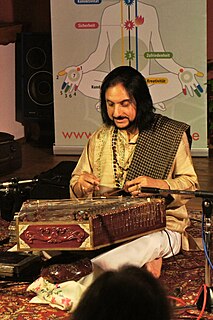 Kaul is a surname used by the Kashmiri Pandit community in India.

Abdur Rehman Rahi is a Kashmiri poet, translator and critic. He was awarded the Indian Sahitya Akademi Award in 1961 for his poetry collection Nawroz-i-Saba, the Padma Shri in 2000, and India's highest literary award, the Gyanpith Award in 2007. He is the first Kashmiri writer to be awarded the Gyanpith, India's highest literary award for his poetic collection Siyah Rood Jaeren Manz( In Black Drizzle ). 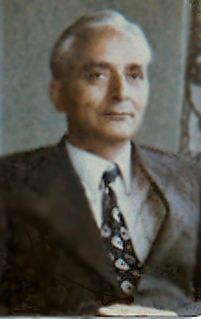 Brijalal Nehru was a noted civil servant and member of the Nehru family.

Adi Pherozeshah Marzban (1914–1987) was an Indian Gujarati Parsi playwright, actor, director, broadcaster known for his efforts in modernizing Parsi theatre. He was awarded the Padma Shri, the fourth highest civilian award of India in 1964 and Sangeet Natak Akademi Award in 1970.

Daji Bhatawadekar, popularly known by his stage name, Krishnachandra Moreshwar, was an Indian theatre personality and film and television actor. He was credited with the revival of Sanskrit and Marathi theatre in India. A winner of the Sangeet Natak Akademi award in 1965, he was honoured by the Government of India in 1967, with the award of Padma Shri, the fourth highest Indian civilian award for his contributions to the society.

Sheila Bhatia was an Indian poet, playwright, theatre personality and the founder of the Delhi Art Theatre, a forum based in Delhi for the promotion of Indian art forms. Punjabi opera, an Indian form of dance drama incorporating operatic movements, is reported to have been originated by Sheila Bhatia. She was honoured by the Government of India in 1971 with Padma Shri, the fourth highest Indian civilian award. A decade later, she received the Sangeet Natak Akademi Award for theatre direction in 1982 followed by Kalidas Samman in 1997.

Kashmiri cinema is the Kashmiri language-based film industry in the Kashmir Valley of India. The first Kashmiri feature film, Mainz Raat, was released in 1964.

Naresh Chander Lal is an Indian film director and producer. He was awarded Padma Shri for his contribution in films and theater in 2016. He is the second person to receive the Padma Shri award from Andaman and Nicobar Islands.