listen )) is a river in Picardy, northern France.

The river is 245 km (152 mi) in length, from its source in the high ground of the former Arrouaise Forest  [ fr ] at Fonsomme near Saint-Quentin, to the Bay of the Somme, in the English Channel. It lies in the geological syncline which also forms the Solent. This gives it a fairly constant and gentle gradient where several fluvial terraces have been identified. [3]

The Somme river was known in ancient times as Samara. It presumably means 'the summery river', that is to say the 'quiet river', stemming from an adjective *sam-aro- ('summery') itself derived from the Celtic root *samo- ('summer'). [4] [5]

The city of Amiens was also known as Samarobriva (Gaulish: 'bridge on the Samara'). It is attested by the early 1st century BC as the chief town of the Ambiani, an ancient Gallic tribe of the region. [5] The modern department of Somme was named after this river.

In 1636, a Spanish army led by Thomas Francis, Prince of Carignano, crossed the Somme defeating a French army during the Thirty Years War threatening Paris. [6]

Most famously, the Battle of the Somme, during World War I, lasted from July to November 1916 and resulted in more than a million casualties. Private A S Bullock in his wartime memoir recalls his first sight of it in early April 1918: '... we reached a small place called Hengest sur Somme. The train stopped and we descended. There in front of us was a muddy, sluggish and somewhat narrow stream, which has given its name to one of the most awful battles in history - the Somme.' [7] The great battles that finally stopped the German advance in the Spring Offensive of 1918 were fought around the valley of the Somme in places like Villers Bretonneux, which marked the beginning of the end of the war.

Départements and towns along the river

The river is characterized by a very gentle gradient and a steady flow. The valley is more or less steep-sided but its bottom is flat with fens and pools. These characteristics of steady flow and flooded valley bottom arise from the river's being fed by the ground water in the chalk basin in which it lies. At earlier, colder times, from the Günz to the Würm (Beestonian or Nebraskan to Devensian or Wisconsinian) the river has cut down into the Cretaceous geology to a level below the modern water table. The valley bottom has now therefore, filled with water which, in turn, has filled with fen. This picture, of the source of the Somme in 1986, shows it when the water table had fallen below the surface of the chalk in which the aquifer lies. Here, the flow of water had been sufficient to keep fen from forming.

This satellite photograph shows the fenny valley crossing the chalk to the sea on the left. The sinuous length at the centre of the picture lies downstream from Péronne.

One of the fens, the Marais de l'Île is a nature reserve in the town of St.Quentin. The traditional market gardens of Amiens, the Hortillonages are on this sort of land but drained. Once exploited for peat cutting, the fen is now used for fishing and shooting

In 2001, the Somme valley was affected by particularly high floods, which were in large part due to a rise in the water table of the surrounding land.

The construction of the Canal de la Somme began in 1770 and reached completion in 1843. It is 156 km (97 mi) long, beginning at St.Simon and opening into the Bay of the Somme. From St.Simon to Froissy (near Bray sur Somme, south of Albert), the canal is alongside the river. Thence to the sea, the river is partly river and partly navigation. From Abbeville, it is diverted through the silted, former estuary, to Saint-Valery-sur-Somme, where the maritime canal, once called the canal du Duc d'Angoulême enters the English Channel.

Corbie is a commune of the Somme department in Hauts-de-France in northern France. 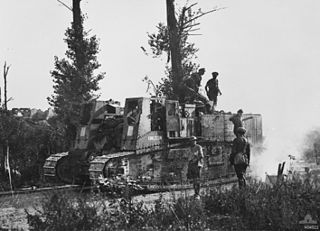 The Second Battle of the Somme of 1918 was fought during the First World War on the Western Front from late March to early April, in the basin of the River Somme. It was part of a series of successful counter-offensives in response to the German Spring Offensive, after a pause for redeployment and supply. 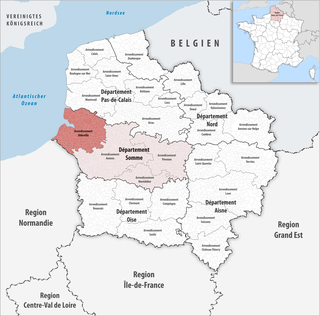 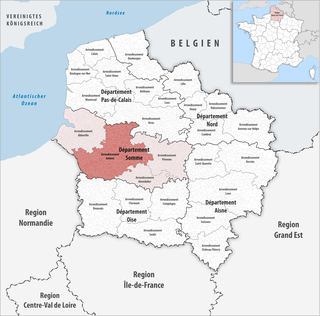 The Battle of Albert began on 25 September 1914, in what became known as the "Race to the Sea", during the First World War. It followed the First Battle of the Aisne as both sides moved northwards, trying to turn the northern flank of their opponent. The Second Army, began to assemble at Amiens in mid-September and was directed by General Joseph Joffre, the Generalissimo of the French Army, to attack near Albert.

Havrincourt is a commune in the Pas-de-Calais department in Hauts-de-France in France. The inhabitants are called Havrincourtois.

Saint-Valery-sur-Somme, commune in the Somme department, is a seaport and resort on the south bank of the River Somme estuary. The town's medieval character and ramparts, its Gothic church and long waterside boardwalk, make it a popular tourist destination.

The Route nationale 1 is a trunk road (nationale) in France between Paris and Calais. It is approximately 339 km (211 mi) long.

The Ambiani were a Belgic coastal tribe dwelling in the modern Picardy region during the Iron Age and Roman periods.

The Réseau des Bains de Mer (RBM) was a group of five metre gauge railways centred on Noyelles-sur-Mer, with a total route length of some 68 kilometres (42 mi). It was a part of the Chemins de fer départementaux de la Somme. Three of the lines are still open as the Chemin de Fer de la Baie de Somme heritage line, and are dealt with under that article. This article covers the other two lines, now closed. All the lines were in the Somme department.

Cerisy is a commune in the Somme department in Hauts-de-France in northern France.

Brie is a commune in the Somme department in Hauts-de-France in northern France.

Noyelles-sur-Mer is a commune in the Somme department in Hauts-de-France in northern France.

Grand-Laviers is a commune in the Somme department in Hauts-de-France in northern France.

Longpré-les-Corps-Saints is a commune in Somme department in Hauts-de-France in northern France. 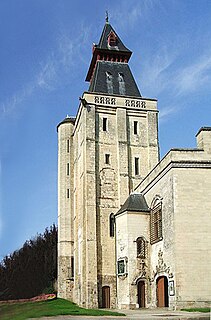 Abbeville is a commune in the Somme department and in Hauts-de-France region in northern France.

The Canal de la Somme is a canal in northern France. Its total length is 156.4 km with 25 locks, from the English Channel at Saint-Valéry-sur-Somme to the Canal de Saint-Quentin at Saint-Simon.

The Battle of Abbeville took place from 27 May to 4 June 1940, near Abbeville during the Battle of France in the Second World War. On 20 May, the 2nd Panzer Division advanced 56 miles (90 km) to Abbeville on the English Channel, overran the 25th Infantry Brigade of the 50th (Northumbrian) Infantry Division and captured the town at 8:30 p.m. Only a few British survivors managed to retreat to the south bank of the Somme and at 2:00 a.m. on 21 May, the III Battalion, Rifle Regiment 2 reached the coast, west of Noyelles-sur-Mer.