Souk El-Had is a town and commune in Boumerdès Province, Algeria. According to the 1998 census it has a population of 4,860. [1]

Algeria, officially the People's Democratic Republic of Algeria, is a country in the Maghreb region of North Africa. The capital and most populous city is Algiers, located in the far north of the country on the Mediterranean coast. With an area of 2,381,741 square kilometres (919,595 sq mi), Algeria is the tenth-largest country in the world, and the largest by area in the African Union and the Arab world. With an estimated population of over 44 million, it is the eighth-most populous country in Africa.

Much of the history of Algeria has taken place on the fertile coastal plain of North Africa, which is often called the Maghreb. North Africa served as a transit region for people moving towards Europe or the Middle East, thus, the region's inhabitants have been influenced by populations from other areas, including the Carthaginians, Romans, and Vandals. The region was conquered by the Muslims in the early 8th century AD, but broke off from the Umayyad Caliphate after the Berber Revolt of 740. Later, various Berbers, Arabs, Persian Muslim states, Sunni, Shia or Ibadi communities were established that ruled parts of modern-day of Algeria: including the Rustamids, Ifranids, Fatimids, Maghrawas, Zirids, Hammadids, Almoravid, Almohads, Hafsids, and Ziyyanids. During the Ottoman period, Algiers was the center of the Barbary slave trade which led to many naval conflicts. The last significant events in the country's recent history have been the Algerian War and Algerian Civil War.

French Algeria, also known as Colonial Algeria, was the colonial rule of France over Algeria. French rule in the region began in 1830 with the invasion of Algiers and lasted until the Algerian War of Independence concluded in 1962. While the administration of Algeria changed significantly over the 132 years of French rule, the Mediterranean coastal region of Algeria, housing the vast majority of its population, was administered as an integral part of France from 1848 until independence.

The French Fourth Republic was the republican government of France between 1946 and 1958, governed by the fourth republican constitution. It was in many ways a revival of the Third Republic that was in place from 1870 during the Franco-Prussian War to 1940 during World War II, and suffered many of the same problems. France adopted the constitution of the Fourth Republic on 13 October 1946.

The regency of Algiers, was a vassal state of the Ottoman Empire in North Africa lasting from 1515 to 1830, when it was conquered by the French. Situated between the regency of Tunis in the east and the Sultanate of Morocco in the west, the Regency originally extended its borders from La Calle to the east to Trara in the west and from Algiers to Biskra, and after spread to the present eastern and western borders of Algeria.

The University of Algiers Benyoucef Benkhedda is a university located in Algiers, Algeria. It was founded in 1909 and is organized into seven faculties. 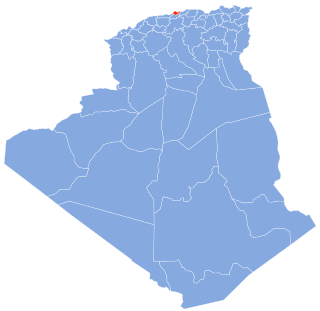 Algiers Province is a province (wilayah) in Algeria, named after its capital, Algiers, which is also the national capital. It is adopted from the old French département of Algiers and has a population of about 3 million. It is the most densely populated province of Algeria, and also the smallest by area.

The Algerian Air Force (AAF) is the aerial arm of the Algerian People's Military.

El Madania is a municipality in Algiers Province, Algeria. It is administratively part of Sidi M'Hamed district. Its municipal code is 1603 and postal code is 16075. It has a population of 51,404 as of the 1998 census, which gives it 15 seats in the PMA.

Sidi M'Hamed is a district in Algiers Province, Algeria. It was named after its capital, Sidi M'Hamed. 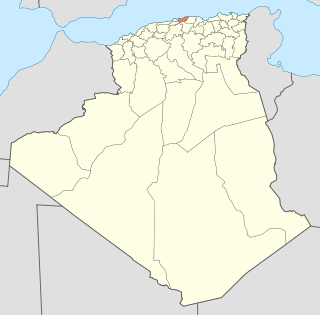 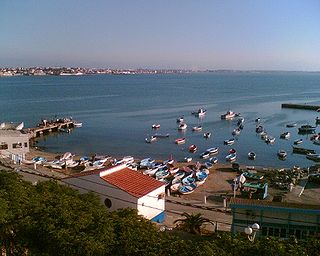 Tamentfoust, the classical Rusguniae and colonial La Pérouse, is a site in the Dar El Beïda District of Algiers in Algeria.

The Battle of Philippeville was part of the Algerian War between France and Algerian rebels, primarily the National Liberation Front (ALN) The battle took place on August 20, 1955 and centered on the Algerian town of Philippeville, though the ALN also made attacks on surrounding areas.

The National Museum of Fine Arts of Algiers is a museum located in Algiers, Algeria. On 14 May 1962 over 300 works of art were brought to the Louvre in Paris from the Museum.