The South Carolina Central Railroad( reporting mark SCRF) is a class III railroad that operates 42 miles (68 km) of former CSX Transportation trackage in South Carolina. Originally a RailTex subsidiary upon its start in 1987, the railroad passed to RailAmerica following their acquisition of RailTex in 2000 and passed to the Genesee & Wyoming Railroad upon its acquisition of RailAmerica. [1]

Primary commodities include steel, chemicals, trash, and plastics, amounting to about 30,000 carloads in 2008. [1] Interchange is made with CSX at Florence. [2]

Both routes that comprise the South Carolina Central were of Seaboard Air Line and Atlantic Coast Line heritage. The oldest segment originally ran from Cheraw through Society Hill and Floyd before ending at Florence. It was constructed by the Cheraw and Darlington Railroad prior to the Civil War. The segment connecting Hartsville to Floyd was built by the Hartsville Railroad in 1890 for the purpose of connecting with the Cheraw & Darlington. Both segments were absorbed into the Atlantic Coast Line by 1900. [3]

The rest of the line from Hartsville to Bishopville was part of the Seaboard Air Line before being merged with the Atlantic Coast Line in 1967 to form the Seaboard Coast Line. The SCL became the Seaboard System in 1983 and CSX Transportation in 1986. CSX sold both lines to RailTex subsidiary South Carolina Central railroad on December 1, 1987. [4] This gave the SCC two disconnected tracks, one running from Cheraw to Society Hill, 12 miles (19 km), and a second line from Florence to Bishopville, 42.4 miles (68.2 km). [2]

Initially the South Carolina Central had four separate divisions independent of the operations in northeast South Carolina. The SCC served as a holding company for the Georgia & Alabama, Georgia Southwestern, Carolina Piedmont, and the Georgia Great Southern. [2]

In 2012 South Carolina Central filed to abandon its line between Cheraw and Society Hill. [6]

For many years, the livery in use on South Carolina Central trains was an original scheme. It was primarily dark blue with white accents and the featured logo was also unique to the SCCR, featuring the outline of the state of South Carolina, the name of the railroad and a red star marking its location in the state. After it passed to the Genesee & Wyoming, the livery was aligned with that of its other subsidiaries. The new livery is primarily orange with black pinstripes and yellow accents. It features the new SCCR logo, also aligned with other G&W subsidiaries, which is an emblem type logo with the shape of South Carolina in the central and the initials of the railroad on either side.

The Bay Line Railroad is one of several short line railroad companies owned by Genesee & Wyoming Inc. It operates between Panama City, Florida, and Dothan, Alabama, including a branch from Grimes to Abbeville, Alabama, reached via trackage rights on CSX's Dothan Subdivision between Dothan and Grimes. The line interchanges with the Florida Gulf & Atlantic Railroad at Cottondale, Florida, and with the CSX Dothan Subdivision near Dothan, Alabama. It also interchanges with the Chattahoochee Bay Railroad in Dothan.

The Conecuh Valley Railway, L.L.C. connects with the CSX at Troy, Alabama, and travels 15.04 miles (24.20 km) to Goshen, Alabama. This short line railroad was created after 2001 from the former Southern Alabama Railroad and is currently owned and operated by Genesee & Wyoming.

Eastern Alabama Railway, LLC is one of many short line railroad companies owned by Genesee & Wyoming, Inc.. On November 26, 1990, the line was sold by CSX to the Eastern Alabama Railway, a subsidiary of Kyle Railways. Kyle Railways later sold the EARY to RailAmerica in 2002 and RailAmerica was acquired by Genesee & Wyoming in 2012.

The Georgia Southwestern Railroad is a Class III short line railroad company that operates over 234 miles (377 km) of track in southwestern Georgia and southeastern Alabama. Beginning in 1989 as a division of the South Carolina Central Railroad on a pair of former CSX Transportation lines, the railroad has since undergone a number of transformations through abandonments and acquisitions, before arriving at its current form. The railroad was formerly a RailAmerica property before going independent, and in 2008 it was acquired by Genesee & Wyoming Inc.

The Three Notch Railroad runs from a connection with CSX Transportation at Georgiana to Andalusia, Alabama, 36 miles (58 km). This short line railroad was created in 2001 and is currently a subsidiary of Genesee & Wyoming.

The Heart of Georgia Railroad is a shortline railroad created in 1999 to lease and operate 177 miles (285 km) of track owned by the Georgia Department of Transportation between Mahrt, Alabama and Vidalia, Georgia, in the United States. The railroad has since expanded to include more than 219 miles (352 km) of track, reaching as far as Midville, Georgia. Initially only the portion from Rochelle to Preston, Georgia was utilized, with the Preston-Mahrt and Rochelle-Vidalia lines out of service. The Heart of Georgia also hosts the SAM passenger excursion train and is owned by parent company Atlantic Western Transportation Company. 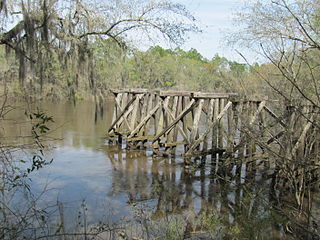 The Valdosta Railway is a shortline railroad in the U.S. state of Georgia, connecting Clyattville to CSX Transportation and the Norfolk Southern Railway at Valdosta. The company began operations in 1992 as a subsidiary of the Rail Management and Consulting Corporation, and was acquired by Genesee & Wyoming Inc. in 2005.

The Salt Lake City Southern Railroad is a 25-mile (40 km) short-line railroad operating between Salt Lake City, and Murray, in Utah, United States. The SL began operating on April 19, 1993 as a RailTex subsidiary. Today the SL is a subsidiary of the Utah Railway and is owned by the Genesee & Wyoming Inc.

The Carolina Piedmont Railroad is a class III railroad and subsidiary of Genesee & Wyoming Inc. operating in the Upstate region of South Carolina. From an interchange with CSX Transportation at Laurens the railroad runs 34 miles (55 km) to the northwest, terminating at East Greenville.

The Abbeville–Grimes Railway Company, also known as the A&G Railroad after 1994, was a shortline railroad formerly operating from Grimes to Abbeville, Alabama, 26.9 miles (43.3 km). The railroad was merged with the Bay Line Railroad in 1996 and continued operation under the new name.

The Cheraw and Darlington Railroad was a 26-mile (42 km) 5 ft gauge shortline railroad that served South Carolina and, later, North Carolina, beginning before the American Civil War. The gauge was changed to 4 ft 9 in in 1886.

The Cheraw and Salisburg Railroad was a shortline railroad that ran between Cheraw, South Carolina, and Wadesboro, North Carolina.