The South Tyrol Alpine Club (German : Alpenverein Südtirol), abbreviated AVS, is an association of German and Ladin-speaking mountain climbers in South Tyrol, northern Italy. Founded in 1946, it is subdivided into 32 sections and 58 local divisions. The AVS is based in Bolzano and has more than 60,000 members. [1]

Originally, the South Tyrolean alpine club sections were members of the German and Austrian Alpine Club (Deutscher und Österreichischer Alpenverein). In 1869 the first sections were founded in Bozen and Niederdorf, Puster Valley. By 1910, 15 more sections had been established in South Tyrol. They initiated the construction of 19 mountain huts, an extensive network of paths through the mountains and training for mountain guides. After the end of the First World War, the annexation of South Tyrol by Italy and the coming into power of the fascists, the South Tyrolean sections were disappropriated and banned in 1923 (see Italianization of South Tyrol). After the end of the Second World War, on December 31, 1945, the military administration of the Allies permitted the foundation of the South Tyrol Alpine Club. Its inaugural meeting took place in Bolzano on 14 June 1946.

Nowadays, the AVS takes care of more than 9,500 km of hiking trails and is involved in nature conservancy and South Tyrolean cultural issues as well. The club is a member of the Union Internationale des Associations d'Alpinisme and the Club Arc Alpin. In 2007, the AVS finished its project to digitalise all hiking trails in South Tyrol. [2] 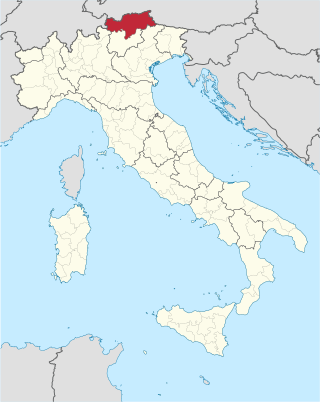 South Tyrol, officially the Autonomous Province of Bolzano, is an autonomous province in northern Italy, one of the two that make up the autonomous region of Trentino-Alto Adige/Südtirol. The province is the northernmost of Italy, the second largest, with an area of 7,400 square kilometres (2,857 sq mi) and has a total population of about 534,000 inhabitants as of 2021. Its capital and largest city is Bolzano.

Bolzano is the capital city of the province of South Tyrol in northern Italy. With a population of 108,245, Bolzano is also by far the largest city in South Tyrol and the third largest in historical Tyrol. The greater metro area has about 250,000 inhabitants and is one of the urban centers within the Alps. 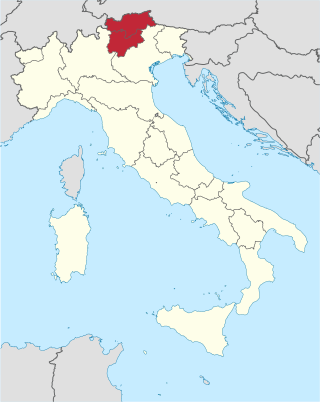 Trentino-Alto Adige/Südtirol is an autonomous region of Italy, located in the northern part of the country. The region has a population of 1.1 million, of whom 62% speak Italian as their mother tongue, 30% speak South Tyrolean German and several foreign languages are spoken by immigrant communities. Since the 1970s, most legislative and administrative powers have been transferred to the two self-governing provinces that make up the region: the Province of Trento, commonly known as Trentino, and the Province of Bolzano, commonly known as South Tyrol. In South Tyrol, German remains the sizeable majority language.

The Austrian Alpine Club has about 573,000 members in 196 sections and is the largest mountaineering organisation in Austria. It is responsible for the upkeep of over 234 alpine huts in Austria and neighbouring countries. It also maintains over 26,000 kilometres of footpaths, and produces detailed maps of key mountain areas within Austria. Much of this work is done by the association's 22,000 volunteers. The association has a museum in Innsbruck dedicated to the history of alpinism. It also has sections in Belgium and the United Kingdom, and a group in Poland.

The South Tyrol Option Agreement was an agreement in effect between 1939 and 1943, when the native German and Ladin-speaking people in South Tyrol and several other municipalities of northern Italy were given the option of either emigrating to neighboring Nazi Germany or remaining in Fascist Italy, where the German minority was subjected to repressive Italianization efforts.

Montan is a municipality with 1,701 inhabitants in the South of South Tyrol in northern Italy, about 15 km south of Bolzano. The name Montan comes from the Latin mons ("mountain").

Salorno sulla Strada del Vino is the southernmost comune (municipality) in South Tyrol in northern Italy, located about 30 kilometres (19 mi) southwest of the city of Bolzano. It is one of only five mainly Italian-speaking municipalities in South Tyrol.

Ettore Tolomei was an Italian nationalist and fascist. He was designated a Member of the Italian Senate in 1923, and ennobled as Conte della Vetta in 1937. 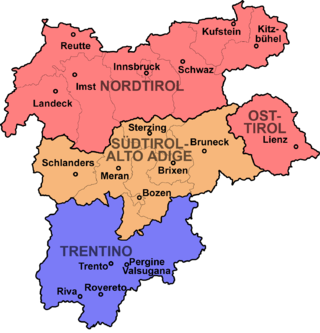 In 1919, at the time of its annexation, the middle part of the County of Tyrol which is today called South Tyrol was inhabited by almost 90% German speakers. Under the 1939 South Tyrol Option Agreement, Adolf Hitler and Benito Mussolini determined the status of the German and Ladin (Rhaeto-Romanic) ethnic groups living in the region. They could emigrate to Germany, or stay in Italy and accept their complete Italianization. As a consequence of this, the society of South Tyrol was deeply riven. Those who wanted to stay, the so-called Dableiber, were condemned as traitors while those who left (Optanten) were defamed as Nazis. Because of the outbreak of World War II, this agreement was never fully implemented. Illegal Katakombenschulen were set up to teach children the German language. 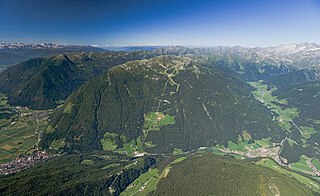 Speikboden is a massif in the Central Eastern Alps located between the three valleys Weißenbach, Mühlwald and Ahrntal. Running in a south-easterly direction, it forms the eastern part of an outlier of the western Zillertal Alps. Its highest point, likewise named Speikboden, is 2,517 m. Further well-known peaks in this massif include Seewassernock (2,516 m), Große Nock (2,400 m), Kleine Nock (2,227 m) and Gornerberg (2,475 m). 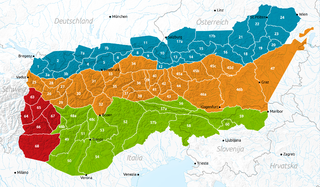 Tyrol is a historical region in the Alps - in Northern Italy and western Austria. The area was historically the core of the County of Tyrol, part of the Holy Roman Empire, Austrian Empire and Austria-Hungary, from its formation in the 12th century until 1919. In 1919, following World War I and the dissolution of Austria-Hungary, it was divided into two modern administrative parts through the Treaty of Saint-Germain-en-Laye: 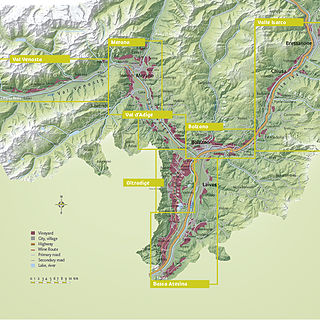 South Tyrol is an autonomous province located in north-east Italy producing wine. This Austro-Italian wine region is noted for the distinct Austrian influences on the wine industry due to the region's long history under the rule of Austria-Hungary and Holy Roman Empires.

The South Tyrolean independence movement is a political movement in the Italian autonomous province of South Tyrol that calls for the secession of the region from Italy and its reunification with the State of Tyrol, Austria. Concurrently, some groups favor the establishment of an interim Free State of South Tyrol as a sovereign nation while reintegration is organized.

Canon Michael Gamper (1885–1956) was an Austrian priest seen as a hero of the Tyrol between the world wars. He is an important figure in the disputed zone between what is now Austria and Italy.