Southern Tech is a public educational institution in Ardmore, Oklahoma. It opened in August 1966 as one of the first rural Career and Technology Centers in the state.[ where? ]

Snake Creek is a census-designated place (CDP) in Mayes County, Oklahoma, United States. The population was 298 at the 2000 census.

Cooper Township is a township in Clearfield County, Pennsylvania, United States. The population was 2,704 at the 2010 census. 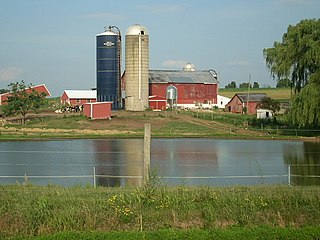 West Buffalo Township is a township in Union County, Pennsylvania, United States. The population was 2,795 at the 2000 census.

Argyle is a town in Denton County, Texas, United States, with a population of 3,282 as of the 2010 census. It is a suburb of Fort Worth.

Orange Walk People's Stadium is a multi-purpose stadium in Orange Walk, Belize. It is currently used mostly for football matches and is the home stadium to Juventus in the Belize Premier Football League of the Football Federation of Belize as well as horse racing and tennis practices. In this stadium is where the annual Cashew Fest is held. Before 2011, it also served as the home stadium to San Felipe Barcelona, also in BPFL.

Mokissos or Mokisos or Mokison (Μωκισόν) was a town of ancient Cappadocia. The Romans called the city Mocisus or Mocissus, and Mocisum, and after the city was rebuilt by the Byzantine Emperor Justinian (527-565), it was renamed Justinianopolis (Ἰουστινιανούπολις). Justinian made Mocisus the capital of the province of Cappadocia Tertia, and elevated its bishopric to the rank of ecclesiastical metropolis, with an eparchia that stretched south of the Halys River, the longest river of Asia Minor. The name Justinianopolis was retained until the end of Byzantine rule. Stephanus of Byzantium calls the town Moukissos (Μούκισσος). In the Synecdemus, the name appears as Rhegemoukisos (Ῥεγεμουκισός) and Rhegekoukisos (Ῥεγεκουκισός), the later evidently an error.

Valderas is a town and a municipality located in the province of León, Castile and León, Spain. According to the 2004 census (INE), the municipality has a population of 2,049 inhabitants.

The Thorndike Peaks are a mountain range located south of the entrance to Makinson Inlet, on the east coast of Ellesmere Island, Nunavut, Canada. They are part of the Arctic Cordillera and are virtually unexplored. There are no trees or wildlife in the Thorndike Peaks because the mountains are north of the Arctic tree line and because of the harsh cold climate. 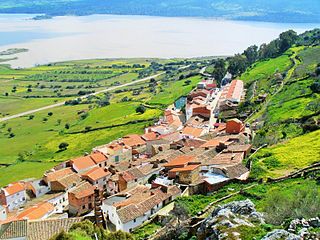 Capilla is a Spanish municipality in the province of Badajoz, Extremadura. It has a population of 189 (2007) and an area of 147 km².

The Canton of Rennes-Sud-Est is a former canton of France, in the Ille-et-Vilaine département. It was disbanded following the French canton reorganisation which came into effect in March 2015.

The Treaty of Bird's Fort, or Bird's Fort Treaty was a peace treaty between the Republic of Texas and some of the Indian tribes of Texas and Oklahoma, signed on September 29, 1843. The treaty was intended to end years of hostilities and warfare between the Native Americans and the white settlers in Texas. The full title of the treaty was "Republic of Texas Treaty with the Indigenous Nations of the Delaware, Chickasaw, Waco, Tawakani, Keechi, Caddo, Anadahkah, Ionie, Biloxi, and Cherokee." The principal negotiators for the Republic of Texas were Edward H. Tarrant and George W. Terrell.

Abiegos is one of nine Parroquias in the municipality Ponga in the autonomous Region Asturia in Spain. The 34 residents (2007) live in a village close to the Nature Park Ponga. The administrative centre of the municipality San Juan de Beleño is 5.5 km away.

Daniel Island is one of the many uninhabited Canadian Arctic islands in the Qikiqtaaluk Region, Nunavut. It is a Baffin Island offshore island located in Frobisher Bay, southeast of Iqaluit. Other islands in the immediate vicinity include Eden Island, Fletcher Island, Nest Island, Redan Island and Scalene Island.

Hickory Corners, New York is a hamlet in the town of Cambria in Niagara County, New York, United States.

Belzoni is a community in Pushmataha County, Oklahoma, United States. Located several miles southwest of Rattan, it was formerly home to a thriving community and continues as a place name. 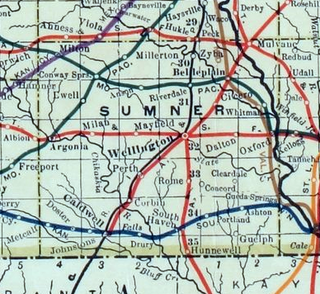 Ashton is an unincorporated community in Walton Township, Sumner County, Kansas, United States. It is located about halfway between South Haven and Arkansas City at 1.75 miles north of the intersection of S Rock Rd and U.S. Route 166, which is 5.5 miles east of I-35, next to an abandoned railroad.

Conifer is an unincorporated community in Jefferson County, in the U.S. state of Pennsylvania.

Belmont is an unincorporated community in Hall County, in the U.S. state of Georgia.