As a northern suburb of Metro Detroit, Southfield shares part of its southern border with the city of Detroit. The city was originally part of Southfield Township before incorporating in 1958. The autonomous city of Lathrup Village is an enclave within city of Southfield. The city is home to the Southfield Town Center complex, which includes five interconnected office buildings. The tallest of these, 3000 Town Center, stands at 402 feet (122.5 m) tall; it is the second-tallest building in the state outside of the city of Detroit (after the River House Condominiums in Grand Rapids) and the 16th-tallest building overall in the state.

Southfield was surveyed in 1817 according to the plan by Michigan territorial governor Lewis Cass. [7] The first settlers came from nearby Birmingham and Royal Oak, Michigan, as well as the states of New York and Vermont. The area that would become Southfield was settled by John Daniels in 1823. Among the founders were the Heth, Stephens, Harmon, McClelland and Thompson families.

Town 1 north, 10 east was first organized as Ossewa Township on July 12, 1830, but the name was changed seventeen days later to Southfield Township. [7] The township took its name from its location in the "south fields" of Bloomfield Township. A US post office was established in 1833 and the first town hall built in 1873.

The Southfield Fire Department was formed on April 6, 1942, and the Southfield Police Department in 1953.[ citation needed ] In the 1950s, cities and villages began to incorporate within the township, including Lathrup Village in 1950, and Beverly Hills in 1957. Most of what was left of the township was formally incorporated as a city on April 28, 1958 to protect it from annexation attempts by the city of Detroit. Whites who had migrated to the suburbs did not want to be associated with the expanding black community of the city. [8]

The current city hall was built in 1964 as part of the new Civic Center complex, which also became home to Southfield's police headquarters. The Civic Center was expanded in 1971 to include a sports arena with swimming pool. Evergreen Hills Golf Course was added in 1972, and in 1978, a new public safety building, the Southfield Pavilion, and a new court building were added. In 2003, an expanded and redesigned Southfield Public Library opened to the public on the Civic Center grounds, featuring state-of-the-art facilities. Outside the Civic Center complex, Southfield has municipal parks and recreation facilities, which were largely developed in the 1970s, including Beech Woods Recreation Center and John Grace Community Center.

Duns Scotus College is now the home of Word of Faith Christian Center.

Sumitomo Corporation operates the Detroit Office in Suite 1450 at 27777 Franklin Road. Industries supported by the office include automotive, rolled steel, and tubular products. [9]

October 28, 2014, Fifth Third Bank announced plans to move its Michigan regional headquarters from Southfield to downtown Detroit in what will be named the Fifth Third Bank Building at One Woodward . [10] The office had 150 employees. [11]

Northland Center, one of the first shopping malls in the nation, opened in Southfield in 1954 and closed in 2015. Southfield is home to over 780 acres (3.2 km2) of parkland and a nationally recognized public school district.[ who? ]

Prominent with the City of Southfield is the Southfield City Centre, a mixed-use area consisting of a major business center, private university, and residential neighborhoods, located near the intersection of Interstate 696 (I-696, Walter P. Reuther Freeway) and the M-10 (Lodge Freeway).

The Southfield City Centre was created in 1992 as a special assessment district, and was originally planned to improve pedestrian amenities and facilitate economic development.

Penguicon has been held in Southfield regularly since 2014.

The main branch of the River Rouge runs through Southfield. The city is bounded to the south by Eight Mile Road, its western border is Inkster Road, and to the east it is bounded by Greenfield Road. Southfield's northern border does not follow a single road, but lies approximately around Thirteen Mile Road. The city is bordered by Detroit and Redford Township to the south, Farmington Hills to the west, Franklin, Bingham Farms, and Beverly Hills to the north and Royal Oak, Berkley and Oak Park to the east. The separate city of Lathrup Village sits as an enclave in the eastern part of the city, completely surrounded by Southfield.

The most prevalent occupations for people in Southfield are a mix of both white- and blue-collar jobs. Overall, Southfield is a city of sales and office workers, professionals and managers. A relatively large number of people living in Southfield work in office and administrative support (16.00%), sales jobs (10.93%), and management occupations (9.72%). The population of Southfield is very well-educated relative to most cities and towns in the nation. Whereas the average community has 21.84% of its adult population holding a 4-year degree or higher: 38.73% of adults in Southfield have a bachelor's degree or advanced degree. The per capita income in Southfield in 2010 was $28,995. " [16]

See also: History of the African Americans in Detroit

In 2002 Southfield had 42,259 black people, giving it the second-largest black population in Metro Detroit and third-largest in the state of Michigan. [17]

As of 2011 many African Americans from Detroit are moving into Southfield and other suburbs of Oakland and Macomb counties. Tensions have occurred between existing middle-class blacks in Southfield and newcomers from Wayne County. [18]

As of 2001 many Chaldeans live in Southfield; they are mostly Assyrian Christians. The Chaldean Federation of America, an umbrella organization for most regional Chaldean groups, is located in Southfield. As of that year, the largest Chaldean church, in terms of the number of congregants, was based here. The city also had the area's sole Chaldean retirement home. [19]

Southfield utilizes the Council-Manager form of government, and thus is governed by a City Council consisting of seven council members. The city council appoints a City Administrator, who manages the day-to-day operations of the city. The popularly elected mayor, who does not vote on council actions, does have the right to veto council actions and holds the power to appoint the city's planner, assessor, attorney, and members of various commissions. The city's Clerk and Treasurer are also popularly elected officials. All of these officials hold non-partisan positions.

AGBU Alex and Marie Manoogian School is an Armenian charter in Southfield.

Southfield Christian School is a private school in Southfield.

Southfield is the broadcast media center for the Detroit area, boasting studios and broadcast facilities for several television stations including WXYZ-TV, WJBK, WKBD-TV, WMYD-TV, WWJ-TV, and City Cable 15. Metro Detroit's regional sports network Fox Sports Detroit is located in Southfield on 11 Mile and Evergreen roads. A transmitter for WDIV-TV is in the city; however, they are the only television station based in downtown Detroit.

The city serves as the location of CBS Radio's Detroit studios. Southfield is also served by WSHJ 88.3 FM, which is a student-run radio station sponsored by Southfield Public Schools.

The major thoroughfares in the city include the John C. Lodge Freeway (M-10), which is among the first urban to suburban highways constructed in the United States. The city also contains I-696, Southfield Freeway (M-39), and US 24 (Telegraph Road). The city contains several freeway interchanges connecting local roads to the freeways. Most prominently, "The Lodge" freeway connects downtown Detroit to "The Mixing Bowl," the sprawling interchange of I-696, US 24, M-10, Lahser Road, and Franklin Road, all of which are located in Southfield.

The Roman Catholic Archdiocese of Detroit formerly operated the Church of St. Bede. By 2013 there was a debate on how the property should be rezoned, and therefore reused. [27]

The Southfield Parks and Recreation Department is responsible for 775 acres of parks, nature preserves and open space and historic properties at 33 sites within the city. There are numerous ball fields, tennis and handball courts, picnic areas and shelters. Soccer fields, play lots and sand volleyball courts are located throughout the city for residents’ enjoyment. [28] [29]

Warren is a city in Macomb County in the U.S. state of Michigan. The 2010 census places the city's population at 134,056, making Warren the largest city in Macomb County, the third largest city in Michigan, and Metro Detroit's largest suburb. The city is home to a wide variety of businesses, including General Motors Technical Center, the United States Army Detroit Arsenal, home of the United States Army TACOM Life Cycle Management Command and the Tank Automotive Research, Development and Engineering Center (TARDEC), the headquarters of Big Boy Restaurants International, and Asset Acceptance. The current mayor is James R. Fouts, who was elected to his first mayoral term in November 2007. 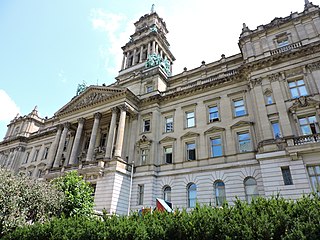 Oakland County is a county in the U.S. state of Michigan. It is part of the metropolitan Detroit area, located northwest of the city. As of the 2010 census, its population was 1,202,362, making it the second-most populous county in Michigan, behind neighboring Wayne County. The county seat is Pontiac. The county was founded in 1819 and organized in 1820.

Macomb County is a county located in the eastern portion of the U.S. state of Michigan, bordering Lake St. Clair, and is part of northern Metro Detroit. As of the 2010 census, the population was 840,978, making it the third-most populous county in the state. The county seat is Mt. Clemens.

Roseville is a city in Macomb County in the U.S. state of Michigan, and is a part of the Metro Detroit area. The population was 47,299 at the 2010 census. Until 1958, Roseville was a part of Erin Township. 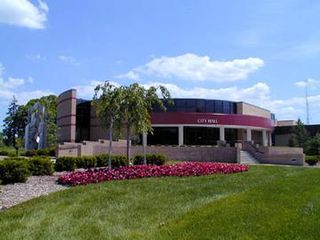 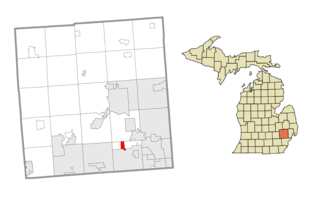 Bingham Farms is a village in Southfield Township, Oakland County in the U.S. state of Michigan. The population was 1,111 at the 2010 census.

Lathrup Village is a city in Oakland County in the U.S. state of Michigan. The population was 4,075 at the 2010 census. This city is surrounded by the city of Southfield. The I-696 / Reuther Freeway goes through nearly the east–west center of town, and Southfield Road goes nearly through the north–south center. The Southfield Town Center, formerly known as the Prudential Town Center, is within walking distance of the southwest corner of the city.

Royal Oak Charter Township is a charter township of Oakland County of the U.S. state of Michigan. As of the 2010 census, the population was 2,419. The nearby city of Royal Oak is legally and administratively separate from the township.

Southfield Township is a civil township of Oakland County in the U.S. state of Michigan. The population was 14,547 at the 2010 census. 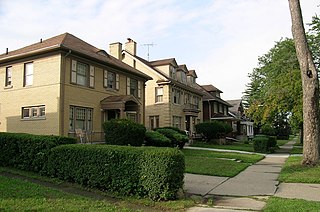 Highland Park is a city in Wayne County, Michigan, and part of the Metro Detroit. The population was 11,776 at the 2010 census. Along with Hamtramck, the city is completely surrounded by Detroit.

Romulus is a city of Metro Detroit, located in Wayne County in the U.S. state of Michigan. The population was 23,989 at the 2010 census, an increase from 22,979 in 2000, making the city the 80th largest city in Michigan. Romulus is home to Detroit Metropolitan Airport. The city is the westernmost community in the Downriver area of Wayne County. 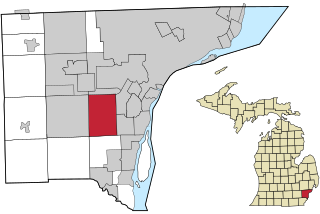 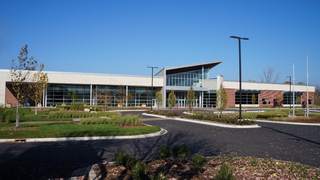 Westland is a city in Wayne County in the U.S. state of Michigan. It is located about 16 miles (26 km) west of downtown Detroit. As of the 2010 census, the city had a total population of 84,094. It is the 10th largest city and 12th largest municipality in Michigan. 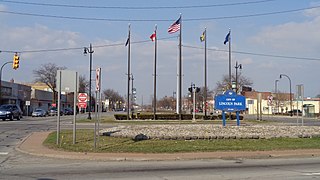 In 2004, Metro Detroit had one of the largest settlements of Middle Eastern people, including Arabs, Chaldo-Assyrians, and Jews, in the United States. As of 2007 about 300,000 people in Southeastern Michigan traced their descent from the Middle East. Dearborn's sizeable Arab community consists largely of Lebanese and many Assyrian/Chaldean/Syriac who immigrated for jobs in the auto industry in the 1920s, and of more recent Yemenis and Iraqis. In 2010 the four Metro Detroit counties had at least 200,000 people of Middle Eastern origin, excluding Jews. Bobby Ghosh of TIME said that some estimates gave much larger numbers. From 1990 to 2000 the percentage of people speaking Arabic in the home increased by 106% in Wayne County, 99.5% in Macomb County, and 41% in Oakland County.