Southgate is a suburban area of north London, England in the London Borough of Enfield. It is located around 8 miles (12.9 km) north of Charing Cross. The name is derived from being the south gate to Enfield Chase.

Southgate was originally the South Gate of Enfield Chase, the King's hunting grounds. This is reflected in the street names Chase Road (which leads due north from the station to Oakwood, and was formerly the avenue into the Chase) and Chase Side. There is a blue plaque on a building on the site of the south gate. A little further to the south was another small medieval settlement called South Street which had grown up around a village green; by 1829 the two settlements had merged and the village green became today's Southgate Green. [2]

Southgate was predominantly developed in the 1930s: largish semi-detached houses were built on the hilly former estates (Walker, Osidge, Monkfrith, etc.) following increased transport development. In 1933, the North Circular Road was completed through Edmonton and Southgate, and also in 1933, the London Underground Piccadilly line was extended from Arnos Grove (where it had reached the previous year), through Southgate tube station, on to Enfield West (now known as Oakwood). This unleashed a building boom, and by 1939 the area had become almost fully developed.

Within the area is the art deco Grade II* Southgate tube station designed by Charles Holden. The area has several large green parks such as Grovelands Park which covers ninety-two acres and contains the seven-acre former boating lake and adjoining woodland of the adjacent Grade I listed Grovelands House (formerly 'Southgate Grove'). [5] In Waterfall Road is Christ Church, built in 1862 by Sir Gilbert Scott; adjacent to its grounds stands the Minchenden Oak. Across the road from the church lies the Walker Cricket Ground; a regular Middlesex venue which was first used in 1859 and is named after the cricketer John Walker.

Southgate station on the Piccadilly line is the nearest tube stop to most of Southgate's residential area. Other stations are at Oakwood (to the north) and Arnos Grove (to the south west).

Southgate is a cosmopolitan district. There has been a prominent Jewish community since the early 20th century. There are also many Greek, Greek Cypriot, Japanese, and Turkish families living in the district. [6] As of the 2011 census, White British makes up 45% of the population, followed by Other White at 20%. [7]

The parliamentary constituency covering the part of Southgate in the London Borough of Enfield is Enfield Southgate (UK Parliament constituency). Until his death in the Brighton bombing in 1984, the constituency was represented by Sir Anthony Berry. In 1997, Michael Portillo, who succeeded Sir Anthony, lost the seat to Stephen Twigg, who after two terms lost in his turn to David Burrowes in May 2005. In the 2017 general election, Bambos Charalambous defeated Burrowes and became the new representative of the constituency.

Main article: List of schools in the London Borough of Enfield

Christ Church stands near Southgate Green. This was built on the site of Weld Chapel, [29] which was built in 1615 and demolished in 1863. The clock on the church was placed there to celebrate Queen Victoria's diamond jubilee. The church contains London's largest collection of pre-raphaelite stained glass by Morris, Marshall Faulkner & Co (later Morris & Co). [30] The parish church of St Andrew is on Chase Side. Emmanuel Evangelical Church meets in Ashmole School. [31] Southgate Methodist Church is on The Bourne, near Southgate Underground station. It was built in 1929, replacing a building on Chase Side. It is an active community hub.

The Southgate Masonic Centre is home to 160 Lodges of which 15 are from Middlesex, along with 5 Chapters. The Centre, a converted church hall, was opened in 1968. The Middlesex Lodges that joined had been meeting in pubs and similar venues and welcomed the opportunity to have their own Centre.

Oak Hill College is a theological college located on Chase Side. It trains both Anglican and Independent students for Church ministry in the UK and overseas.

Because of the age of the former village and its position in a ring of villages one day's travel by coach from London, Southgate had many pubs: within the village centre there were six local licensed premises. [32]

Many were located on Chase Side but some, such as The Bell, The Crown and the Chase Gate Tavern, were demolished as part of 20th Century redevelopment and others have closed more recently; The Waggon (formerly Waggon and Horses) became an Anatolian restaurant in 2013. The Rising Sun was the terminus for a local horsebus service to Colney Hatch (and there to Kings Cross) before the arrival of the railways, whereupon the service switched to the new station in Palmers Green. [32] It was rebuilt in 1932, and substantially renovated in 2008, changing its name to The Sun and later The Maze Inn but was subsequently closed in 2016 and demolished in 2019. [33] The Crown is commemorated in the name of The New Crown on Chase Side. [34] The Hart (formerly The White Hart) is the last long-standing pub in the immediate area, located on the adjoining Chase Road, near Southgate Circus roundabout.

Other notable local pubs are Ye Olde Cherry Tree which overlooks Southgate Green, and The Woodman on Bourne Hill. Former public house The Woolpack on the nearby High Street is now a restaurant.

Palmers Green is a suburban area and electoral ward in Enfield, North London, England. It is located within the N13 postcode district, around 8 miles (13 km) north of Charing Cross. It is home to the largest population of Greek Cypriots outside Cyprus and is often nicknamed "Little Cyprus" or "Palmers Greek".

Winchmore Hill is an affluent suburb and electoral ward in the Borough of Enfield, North London, in the N21 postal district. With the Winchmore Hill conservation area as a focal point, the district is bounded on the east by Green Lanes, Barrowell Green, Firs Lane and Fords Grove, and on the north-west by Grovelands Park; in the south it extends to part of Aldermans Hill, and in the north to Vicars Moor Lane and Houndsden Road. Winchmore Hill is 8.9 miles (14.3 km) north north-east of Charing Cross.

Arnos Grove is a London Underground station located in Arnos Grove in the London Borough of Enfield, London. It is on the Piccadilly line between Bounds Green and Southgate stations and is in Travelcard Zone 4. The station opened on 19 September 1932 as the most northerly station on the first section of the Piccadilly line extension from Finsbury Park to Cockfosters. It was the terminus of the line until services were further extended to Oakwood on 13 March 1933. When travelling from east of Barons Court and through Central London, Arnos Grove is the first surface station after the long tunnel section of the Piccadilly line. The station has four platforms which face three tracks. 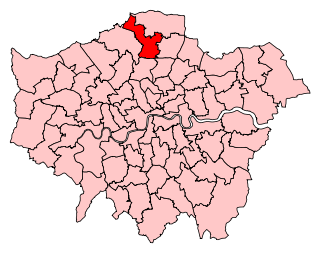 Enfield Southgate is a constituency in the House of Commons of the UK Parliament. It was created in 1950, and has been represented since 2017 by Bambos Charalambous, a member of the Labour Party.

Osidge is a district in the London Borough of Barnet, between Brunswick Park and Southgate, just west of the border with the London Borough of Enfield. It may be defined as the part of postal district N14 that is in Barnet. Osidge has no formal border and is entirely enclosed within the electoral ward of Brunswick Park, East Barnet; however Oak Hill Park forms a natural boundary to the North and Pymmes Brook to the West, with the A111 to the East and the Piccadilly line to the South/East. 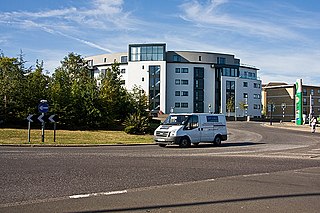 New Southgate is a residential suburb straddling three Outer London Boroughs: a small part of the east of Barnet, a south-west corner of Enfield and in loosest definitions, based on nearest railway stations, a small northern corner of Haringey in North London, England where estates merge into Bounds Green.

Brunswick Park is a neighbourhood, public park and electoral ward in the London Borough of Barnet. It is north of New Southgate and to the south of Oakleigh Park. Roads include Brunswick Park Road, Brunswick Avenue and Brunswick Crescent.

The Walkers of Southgate were an English cricketing family who lived at Arnos Grove house in Southgate, Middlesex, England. The family fortune was built through the brewing company Taylor Walker, and the seven brothers were all sent to Harrow School and Trinity College, Cambridge. It was at school and university that the Walkers became keen cricketers.

Arnos Grove is an area of North London, England, within the London Borough of Enfield, Southgate Green ward. It is centred 7.5 miles (12 km) north of Charing Cross and was a medieval demesne and estate of the Arnolds, a Norman-heritage family, in Middlesex. It is adjacent to New Southgate. The natural grove, larger than today, was for many centuries the largest woodland in the chapelry of Southgate in the parish of Edmonton. It became inter-related with Arnos Park when its owner was permitted to enclose much of its area through the widespread legal practice of inclosure of the common land to create the former park, the heart of which is now public parkland.

Southgate School is a state comprehensive secondary school in the London Borough of Enfield. It has approximately 1574 pupils. 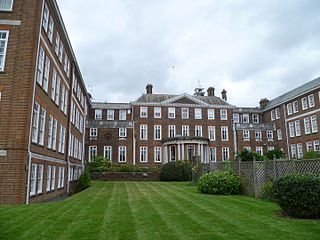 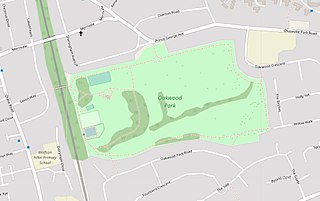 Oakwood Park is a public park in Oakwood, in the London Borough of Enfield, on land that was formerly part of Enfield Chase. It opened in 1929 and comprises 64 acres of land. It is notable for its commemorative avenue of poplar trees, an avenue of scarlet oaks planted by mayors of Enfield, and an ice well that was built by Samuel Sugden, on whose estate of Oak Lodge the park was largely built and after which it was named.

Samuel Sugden was an English merchant from Leeds who built Oak Lodge in north London, after which the district of Oakwood is named.

Sir John Weld was a London merchant who in 1610 bought Arnolds, the estate which gave its name to Arnos Grove and on which Arnos Grove house was later built.

Minchington Hall, or Mincington Hall, or Minchenden House, was a country house and estate in Southgate, then in the county of Middlesex in England, and now in Greater London. It was on Southgate Green and the south side of Waterfall Road, and adjoined Arnolds slightly further east, which was originally less significant than Minchington. The estate was merged into Arnos Grove in 1853 and the house demolished.

Beaver Hall was a country house in Middlesex, England. It was set in grounds of around 40 acres (16 ha) that stood to the east and south of the current Waterfall Road, then known as Waterfall Lane and Church Hill, near the old centre of Southgate. The grounds stretched as far south as the Pymmes Brook where Arnos Park was later built. Beaver Hall was acquired by John Walker of the Taylor-Walker brewing family in 1870. The house was demolished in 1871 and the grounds merged into the adjacent Arnos Grove estate.